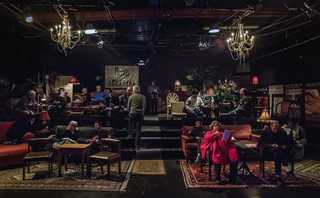 Los Angeles, CA (The Hollywood Times) March 16, 2109 – Open Fist Theatre Company opened  their 3rd annual political pop-up in speakeasy fashion, featuring a rotating roster of eight 10-minute plays by writers from across the country – exploring our nation’s current social and political climate and how the past year has affected us.  What Matters Now?/! Atwater Village Theater has created a cozy speakeasy vibe where patrons almost feel a part of the action occurring on stage – it’s personal and very effective. The audience can arrive early or stay later to have a drink at the side bar while seated in chairs or sofas to enjoy the company they’re with or chat with the cast members after the show in the relaxing atmosphere.

The opening night lineup was: Electric Eye, Heart Attack Zack, An Awful Waste of Space, High School Intifada, A Dream of Two Moons, But I’m Not Really, Toppers and Pandemonium. Others on the nightly rotation basis: How Are We Doing, Inheritance and The Protest.

We pride ourselves on doing the things that are never seen in intimate theatre. Edgy, experimental, ambitious and bold are what you can expect to see. Open Fist Company

The evening began with Timothy Mooney’s Electric Eye with Phillip William Brock as a scholar who traces the decline of Western Civilization to the application for the patent for the first self-flushing toilet on January 16, 1979. All of the actors are good and some pieces are more engaging than others – depending on your view of the world we live in. More highlights were: Beth Robbins in Bonnie Ratner’s But I’m Not Ready – A mature woman struggles to teach her yoga class during a lockdown in a Jewish community center and Caroline Klidonas and David Shofner in Cary Gitter’s High School Intifada – A New Jersey teen is called into the principal’s office for bullying after tweeting “Israel is a terrorist force.” All eight of the shows are original in content and make for a refreshing theatre night with social issues from date rape to what to name a baby during these times to a female firefighter pulling a baker out of a building inferno as we realize he’s the same baker who wouldn’t bake a wedding cake for she and her wife because they are lesbians. To burn or not to burn… how sweet is revenge after all?

Artistic Director Martha Demson started the festival after President Trump’s election while thinking about the role of theatre in the aftermath. Demson and company searched out plays with narratives that were true to the writer’s intent with being neither to heavy or slight and it made for an immediate hit. After the company previously moved around, this is their second year at Atwater Village.

It’s an evening you won’t forget and will surely enjoy.