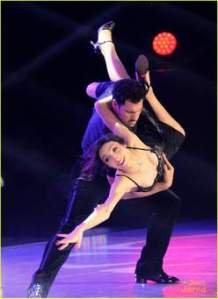 Tickets for Shall We Dance on Ice Now On Sale

LAS VEGAS (September 19, 2016) – The Mandalay Bay Events Center and Disson Skating are pleased to announce Shall We Dance on Ice in Las Vegas Sunday, Dec. 11 at 7 p.m. The event will showcase a journey of dance through the ages with dancing, ice skating and music. The show will also feature a live musical performance by the Goo Goo Dolls, who recently released their new album Boxes.  The show will feature top ice dancers and professional dancers who have choreographed numbers to the Goo Goo Dolls’ music.

The cast features the most decorated ice dancing team in U.S. figure skating history, 2014 Olympic Champions, two-time World Champions and six-time U.S. Champions Meryl Davis and Charlie White. Following the Olympics, Davis and White competed in the 18th season of ABC’s Dancing with the Stars where Davis was crowned champion and White was a semi-finalist.

In addition to Davis and White, the ice dancing cast will include:

The multi-platinum, Grammy-nominated Goo Goo Dolls are one of the most globally respected and influential forces in popular music, selling more than 12 million albums since 1986. They have scored 14 Top 10 radio hits (more than any other artist in the history of the Hot AC format), including “Name,” “Slide,” and “Iris,” the latter spending nearly 12 straight months on the Billboard charts and holding the No. 1 position for 17 consecutive weeks. The band has toured the globe countless times, performed in front of millions of fans, received numerous awards (including four Grammy nominations), and recorded and released eleven studio albums. Rzeznik has also been honored with the Songwriters Hall of Fame Hal David Starlight Award.

Douglas Webster, the Founding Artistic Director of Ice Dance International, will serve as the show’s Artistic Director and Choreographer. He has worked on more than 45 full-scale productions in nearly 10 years.

The show is part of the Colgate Skating Series and will be taped for an ABC telecast, airing at a later date.