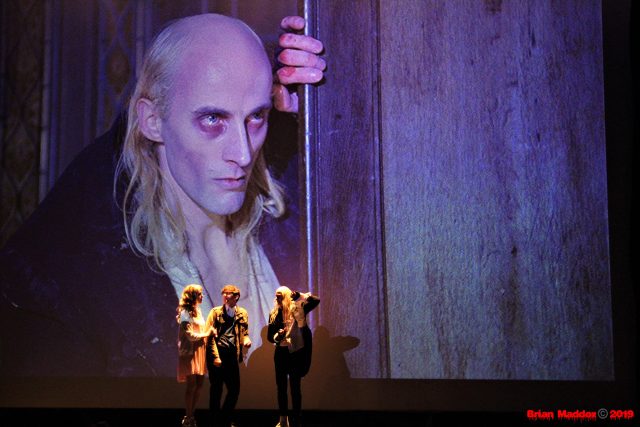 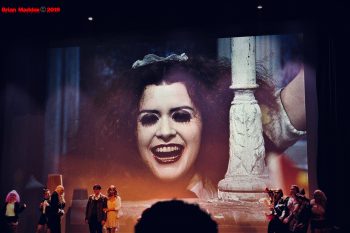 When RHPS Fan Club president Sal Piro first screened the now cult classic The Rocky Horror Picture Show back in 1977, an idea would shortly transpire in which its massive fanbase could participate in tandem with the film by way of actors performing shadow cast and various uses of props by the audience to coincide with specific scenes during the movie. The phenomenon only grew from there and became a pivotal requisite during theater showings for more than 40 years now. Be it Tim Curry’s incomparable performance as gender bending alien, Dr. Frank-N-Furter, Patricia Quinn’s soul piercing eyes as Magenta (a domestic), or gleefully singing along to Science Fiction – Double Feature, there’s just something so very special about experiencing this seminal film in a theatre brimming with passionate fans.

The stately Alabama Theatre hosted its annual Rocky Horror Masquerade Ball this past weekend, drawing out multitudes of ardent costumed fans and leaving in its wake a colossal sea of rice, boundless streams of toilet paper lingering from the balconies and more toast than I’ve ever seen in my 37 years. While I’ve been a fan of this film and its soundtrack for many years now, I believe I am now formerly what is affectionately known by all RHPS veterans as a “virgin,” a title which is bestowed upon those who have yet to experience an interactive viewing of the movie, whom of which is also met with a mouthful of whipped cream, topped with a cherry and eaten by the server of this delicious “punishment” of sorts. After seeing this unfold on the stage of the beautiful Alabama Theatre, I’m now currently kicking myself for not loudly announcing my virginity when this delectable happening took place. Maybe I’m just a sucker for whipped cream and cherries. 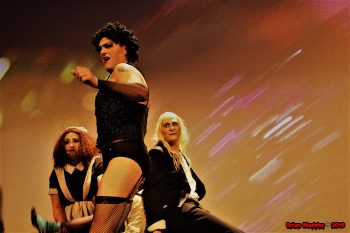 But when the house lights are “a little brought down” and those famed, disembodied lips of Magenta herself appear on screen, accompanied by the voice of Richard O’Brien/Riff Raff softly singing that epic first line,“Michael Rennie was ill the day the earth stood still,” the hordes of fans are sent into a collective uproar, followed shortly by showers of rice mizzling through the air in a seemingly infinite reserve after the ceremony of Mr. and Mrs. Ralph Hapschatt. I must confess here that those doe eyes of Susan Sarandon as Janet Weiss will never cease to make my heart skip a beat while staring up at fiancé Brad Majors (Barry Bostwick) during their rain soaked duet of Over At The Frankenstein Place.. also synced with scores of water pistols firing endlessly throughout. What follows with the numerous actors on stage performing flawlessly in unison with the madness onscreen just serves the experience to its absolute fullest. The experience itself is one that I can easily liken to Janet’s cry of “I’ve tasted blood, and I want more!”

Whether in the comforts of your own home, or with a packed theatre filled with RHPS aficionados, any screening of this anomaly of a feature film is forever guaranteed to leave its viewers shivering with Antici….PATION! 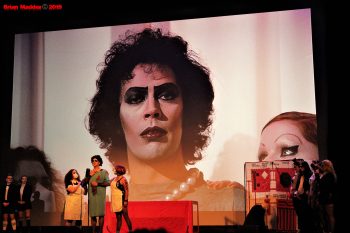