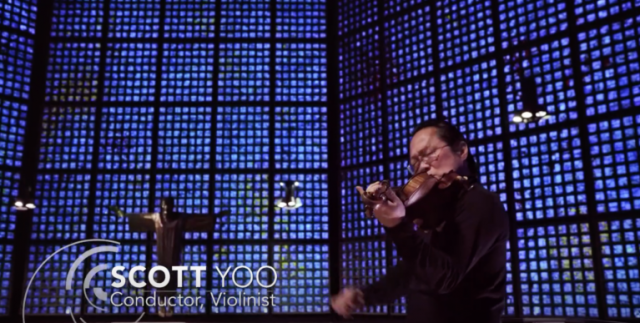 Throughout the series, Scott and Alice met with world-renowned virtuosos, historians, artisans, and craftsmen as they visited legendary sites and discovered lost archives, seeking to connect the classics to the contemporary.  In the process, viewers discovered how world culture has influenced some of the most timeless music ever written.

NOW HEAR THIS was discussed at a 2019 TCA Summer Press Tour panel taking place on Tuesday, July 30th, 2019 at the Beverly Hilton.  Present were David Horn, executive producer of GREAT PERFORMANCES from WNET in New York, and filmmaker and executive producer Harry Lynch.

Series host Scott Yoo participated via satellite from San Luis Obispo.  The Harvard-educated Yoo, generally considered to be one of the world’s leading violinists, is also the Artistic Director of the Mexico City Philharmonic and the Music Director of Festival Mozaic.

Somehow we also associate visual splendor with music.  What was it like for Scott and Alice to visit some of these beautiful places, and what was like when they got to play in one of those places?

“When you stand where Handel had been or you stand where Bach was buried or you stand next to a 300-year-old manuscript of Vivaldi and you’re playing right off of his handwriting, I don’t know.  It really does change you, and it’s a real privilege and honor to experience those things, especially as an American,” said Scott.

92 percent of Vivaldi’s music was once lost, and only rediscovered in 1929!  Yet Scott was playing Vivaldi in a library that houses the 92 percent of his manuscripts that were only recently discovered.

One of the indirect ways that we knew of Vivaldi’s work before the manuscripts had been discovered is that Bach transcribed them.  No one knew where Bach had gotten those ideas until relatively recently. 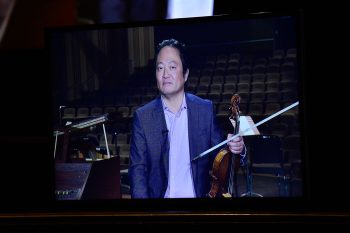 In the second episode of NOW HEAR THIS, Scott remarked that making the show had changed his mind about Bach, one of the greatest musical geniuses who ever lived.  Scott thought that learning more about Bach had humanized the “marble statue on your mother’s piano” and made him and his music more approachable.

How exactly did the journeys and discoveries on NOW HEAR THIS work?  How much was researched in advance?

Scott had a lot of background on Vivaldi and Bach; Scarlatti, less so.  But sometimes Harry withheld information so that when Scott entered a room, he was genuinely surprised!  “That was very helpful, because I’m not Meryl Streep,” joked Scott.

“I think the special thing about this show, for my money, is that it really is a travelogue,” Scott continued.  “It’s a travel show with music.  It’s a music show with travel.  And I think that combination is very effective.  I hope the public will like that.”

Everyone who helped to make or host NOW HEAR THIS learned new things about music, even when it was composed by giants like Vivaldi, Bach, and Handel who are generally thought of as household names.  Considering the high caliber of the producers and participants, this was no small accomplishment.

One cannot help but want to join Scott and his associates at the many amazing meals consumed on the show.  “There is a commonality between food and any art form, be it architecture or fashion or poetry or music,” said Harry Lynch.  “One of the things that the show always tries to do is show that, allow you to feel it.  So that’s one of the reasons there’s a food section in almost every show.”

“And a little bit of drinking, too,” commented David Horn.

Do musicians make the best conductors the way actors make the best directors?  “Well, I would say that to be a conductor, you have to have credibility, and you have to speak in a way where the musicians understand that you have empathy for their situation,” said Scott.  “I think many of the greatest conductors were musicians.  You want to have as many tools and advantages as you can if you want to stand up in front of 110 people and tell them what to do.”

And on that note, the panel ended.