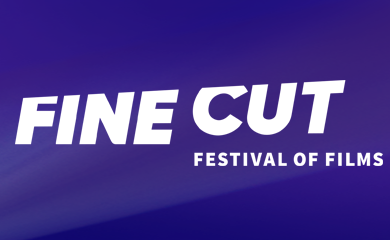 Four Finalists Announced During Sept. 29 Virtual Event to Receive Variety of Valuable Prize Packages with One Honoree to Attend The American Pavilion

Fine Cut is made possible by a generous grant from The Bridges / Larson Foundation. A variety of prize packages valued between $2,500 and $10,000 will be awarded to the winners with one receiving the opportunity to be a part of the American Pavilion Emerging Filmmaker showcase at the Cannes International Film Festival in May of 2021 (to be confirmed based on travel restrictions) thanks to a partnership with The American Pavilion, the epicenter of American hospitality and communication at the world’s largest film market. All short films selected as finalists in the FINE CUT Festival of Films will be included in a series of one-hour broadcast episodes on KCET public television in Southern California that will air starting Wed., Sept. 30 at 10 p.m. on KCET in Southern California and on Thurs., Oct. 1 at 11 p.m. ET/PT on Link TV nationwide (Dish Network 9410 and DirecTV 375), with many films available for streaming at kcet.org/finecut.

Finalists and winners in each category were determined by an industry panel of nine esteemed experts that included KCET Cinema Series and Must See Movies! Host as well as Deadline.com’s Chief Film Critic Pete Hammond, Actress and Director Yolonda Ross (The Chi, How to Get Away With Murder, Stranger Inside, Go For Sisters), Creative Producer/Head of Development for Six Point Harness

Over 400 films were submitted during May and June of this year by filmmakers enrolled in 40 Southern California schools. Finalists were chosen from the short films (25 minutes or under) submitted in the categories of Documentary, Animation and Narrative shor

Winners in each of the three categories will be announced during a pre-taped virtual awards ceremony event taking place on September 29 that will offer up clips from each of the winning films.

One student (considered from all Finalists) will also be recognized for their strength as a storyteller and be selected for The Jack Larson Southern California Student Filmmaker Award​, receiving the opportunity to be a part of the American Pavilion Emerging Filmmaker showcase at the Cannes International Film Festival in 2021. For more details on the Virtual Event, go to kcet.org/finecut

Each of the three winning filmmakers in the Narrative, Animation and Documentary categories will receive valuable prize packages, including a one day drone rental package valued at $12,000 from Drone Dudes, a membership to the International Documentary Association, a $10,000 Keslow Camera Package Rental, a $1,000 Quixote Production supplies rental, $1,000 from Autodesk, and a Wacom One Tablet. Honorees will also receive prizes donated from some of the industry’s most reputable names including ARRI, Entertainment Partners, GreenVans, Lightwave 3D, New Filmmakers LA, Pixologic Z Brush, Toon Boom Animation, Variety, Final Draft software and tickets to the 2021 Spring KCET Cinema Series.

All semi-finalists and finalists of the 21st Annual FINE CUT Festival of Films will be invited to one of three virtual workshop roundtable discussions that will take place on September 26 and September 27. The roundtable format is designed to provide tomorrow’s generation of filmmakers with opportunities to engage with various entertainment industry experts in the film, unscripted television, animation and documentary fields.

The 2020 FINE CUT finalists and episodes will air as follows (*schedule subject to change):

Friends and family recount the life and death of Latasha Harlins, the forgotten spark that ignited the ‘92 L.A. riots in “The Dope Years: The Story of Latasha Harlins,” a documentary from USC. UCLA’s “Frog Catcher” is inspired by the true story of a transgender man in 1876. The episode ends with “Doña Julia,” a documentary from Cal State LA and two animated films, “Two” and “Sprout,” from USC and Cal Arts respectively.

A woman travels back to India upon her mother’s sudden death while navigating her family in “Unmothered” from USC. The American Pavilion film “Black Hat” uncovering the double life of a pious Hasidic man on a night out in L.A. “Nothing Down About It” is a documentary from Loyola Marymount University followed by “The Kitchlets” and “Melted”, two animated films from Cal Arts.

Chapman University offers a comedic retelling of the time Johnny Carson started the first toilet paper crisis in the short film “Out of Stock.” A young woman married to a paranoid survivalist must escape in “The Art of Survival,” from UCLA. Finally, the short film “Hey Neighbor” from Chapman University, is followed by two animated shorts “Mr RuRu’s Adventure” from Cal Arts and “A HOLE” from USC.

The festival is a tribute to FINE CUT founder Jack Larson who was an American actor, librettist, screenwriter and producer who may be best known for his portrayal of photographer/reporter Jimmy Olsen in the 1952-1958 television series “Adventures of Superman.” In the late 1990s Larson approached Southern California’s KCET with the idea of creating a student film series that would provide talented students with the much-needed visibility through television. Larson understood how difficult it was for young filmmakers to get broad exposure for their work because, typically, student work is only seen at special screenings and film festivals. Larson thought that public television was an excellent platform for providing critical visibility to emerging filmmakers. KCET shared Larson’s enthusiasm and together they created FINE CUT, which continues to be a flagship program for KCET today.

The new season of FINE CUT will be included in a robust Wednesday night of programming for KCET designed to highlight the resilience of the arts community. Under the theme “Create Wednesday,” the schedule will also feature popular Arts and Culture programs that have previously aired on KCET and PBS that include IN CONCERT AT THE HOLLYWOOD BOWL, arts and culture series ARTBOUND as well as America’s preeminent performing arts television series from PBS, GREAT PERFORMANCES. The lineup also includes the new local weekly series SOUTHLAND SESSIONS which celebrates the creativity and spirit of Los Angeles’ arts and culture communities by featuring a diverse spectrum of content from a variety of prominent voices from Southern California for up-close, virtual “sessions.”