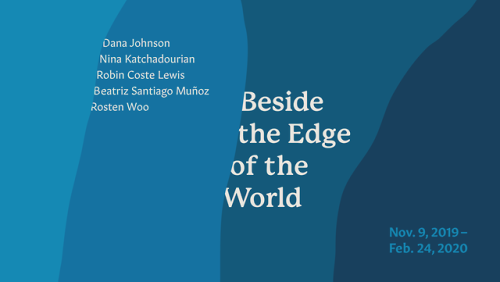 In “Beside the Edge of the World,” a new exhibition of five artists and writers on view until Feb. 24, 2020, Nina Katchadourian’s Strange Creature brings a sensation of the uncanny to the Garden of Flowing Fragrance, otherwise known as the Chinese Garden.

When you look at the interdisciplinary oeuvre of artist Nina Katchadourian, she consistently defies expectations by going against the grain of the typical. Instead, Nina Katchadourian uses a wonderful mixture of insight and humor to foster a sense of the uncanny. In a world where so much has been reduced to corporate outcroppings, she refuses to break as she bends the nature of human perception. Although she is best known for her “Lavatory Self-Portraits in the Flemish Style,” a series of highly amusing self-portraits taken in airplane bathrooms, Nina Katchadourian’s work covers so much more territory while remaining accessible and enjoyable.

When Nina Katchadourian was invited to take part in a creative event entitled “Beside the Edge of the World,” where five modern artists interact with the collections at the Huntington Gardens, she knew it was a rare opportunity. Showcasing new work from a yearlong partnership with Los Angeles arts organization Clockshop, the exhibition marks the fourth year of The Huntington’s /five initiative. The initial goal of the collaboration was to have each participant create work based on research in The Huntington’s collections.

As a connecting link between the creators, the inspiration for the new work is Thomas More’s satirical masterpiece, Utopia (1516). Among many rare volumes in the collection, the Huntington owns a manuscript from the original printing of Utopia. The book was More’s attempt to describe a perfect imaginary world with an alternative society that satirized the socio-political deficits of his time.

As Julia Meltzer, founder and director of Clockshop and co-curator of the exhibition, describes the project, “We selected the artists and writers in ‘Beside the Edge of the World’ because of their interest in working in archives to re-frame and re-imagine history… More was pushing boundaries, and these new works are, too. The artists expanded their inquiry to borders and edges, islands, forgotten histories, and utopian experiments that necessarily happen on the periphery.”

The question facing the artists was how to balance this initiative with the nature of the institution. After all, the Huntington Library, Art Collections, and Botanical Gardens is one of Southern California’s most idyllic tourist attractions. As a collections-based educational institution established by Henry E. Huntington and Arabella Huntington, the Huntington Gardens represent a cultural highlight of national importance. From classic artworks like The Blue Boy by Thomas Gainsborough to Gilbert Stuart’s iconic portrait of George Washington, the catalog of the Huntington’s art museum overflows with legendary works.

Taking on the challenge, Nina Katchadourian chose to center her research on the theme of monsters in maps and rare books within The Huntington’s archive. As she explains in an interview with The Hollywood Times, “I did research in the Huntington Library last March, where I got to see many historic maps that I had known about for a long time, but never seen. A map from 1587, by Abraham Ortelius, had particularly spectacular sea monsters. This led me to a book by Aldrovani called the Monstrorum (1642), in which I found an image of a fish with a human face. Standing on the bridge by the lake of the Chinese Garden at the Huntington one day, I imagined what it would be like to see a creature break the surface of the water, and to have the feeling of never having seen anything quite like it before—to be in a place of curiosity, fear, uncertainty, confusion, and wonder all at once.”

Once again, Nina Katchadourian chooses to play against type and turn the expected on its head. At the same time, she finds a base for her work in the historical. In other words, she connects her imagination to the historical record. Describing this connection, Nina says, “I continued my research, this time into Chinese mythical creatures specifically.  After consulting with a friend, Professor Haun Saussy, a professor of East Asian Languages and Literature at the University of Chicago, I was put in touch with Professor Richard Strassberg, who teaches at the Department of Asian Languages & Cultures at UCLA. Through his guidance, I discovered a book called The Guideways Through Mountains and Seas (4 BCE- 1 BCE) where a “strange creature” called the Red Ru-Fish was described as having the body of a fish with the face of a human. Professor had Strassberg translated the ‘Guideways’ into English, and he helped me understand the nature of that text. My piece, Strange Creature, is now an embodiment of where all this came together.”

At the Huntington Gardens, the Strange Creature stands out in Lake Tai as something unexpected. It looks at first like a gigantic Koi fish until it shifts into place, and the face is revealed. Although not threatening, the image of the Strange Creature does harken back to classic monster movies from the golden age of cinema. At the same time, the work also is a call to action from an environmental perspective. After all, there is no denying the intelligence and gentle demeanor of the Strange Creature. As human beings, how can we not view this creation as an equal? Such a perception opens the door to seeing all creatures of the world as beings connected to us through their very existence. Ultimately, Nina Katchadourian’s work asks us to pause before taking negative actions that might hurt any creature that is innately a part of earth’s biosphere.

When asked how she felt about people’s interaction with her Strange Creature post-installation, Nina Katchadourian tells The Hollywood Times, “For many days, I watched people stop, point, do a double-take. Many people have initially taken Strange Creature to be real. I believe that one of the most wonderful things about not knowing is that for a moment, all the pieces are up in the air—and there is something very liberating about that for the imagination. It’s as if anything could be possible, for an instant, and perhaps that all kinds of things that we’ve never seen before can be real. I find great optimism in these kinds of moments too: we haven’t seen it all, in fact, and not everything is fixed in place the way we think. If that holds true, it also means that things can change.”

Indeed, such optimism and hope are at the very heart of Nina Katchadourian’s artistic discourse. Although her Strange Creature is unsettling upon first glance, the sense of being disturbed quickly passes into fascination and wonder. In her art, Nina Katchadourian adjusts the vision of her audience, allowing us to see the world anew by turning the normative on its head. She asks us to reconsider what we think we know by exposing us to the phenomenal world of her artistic journey.