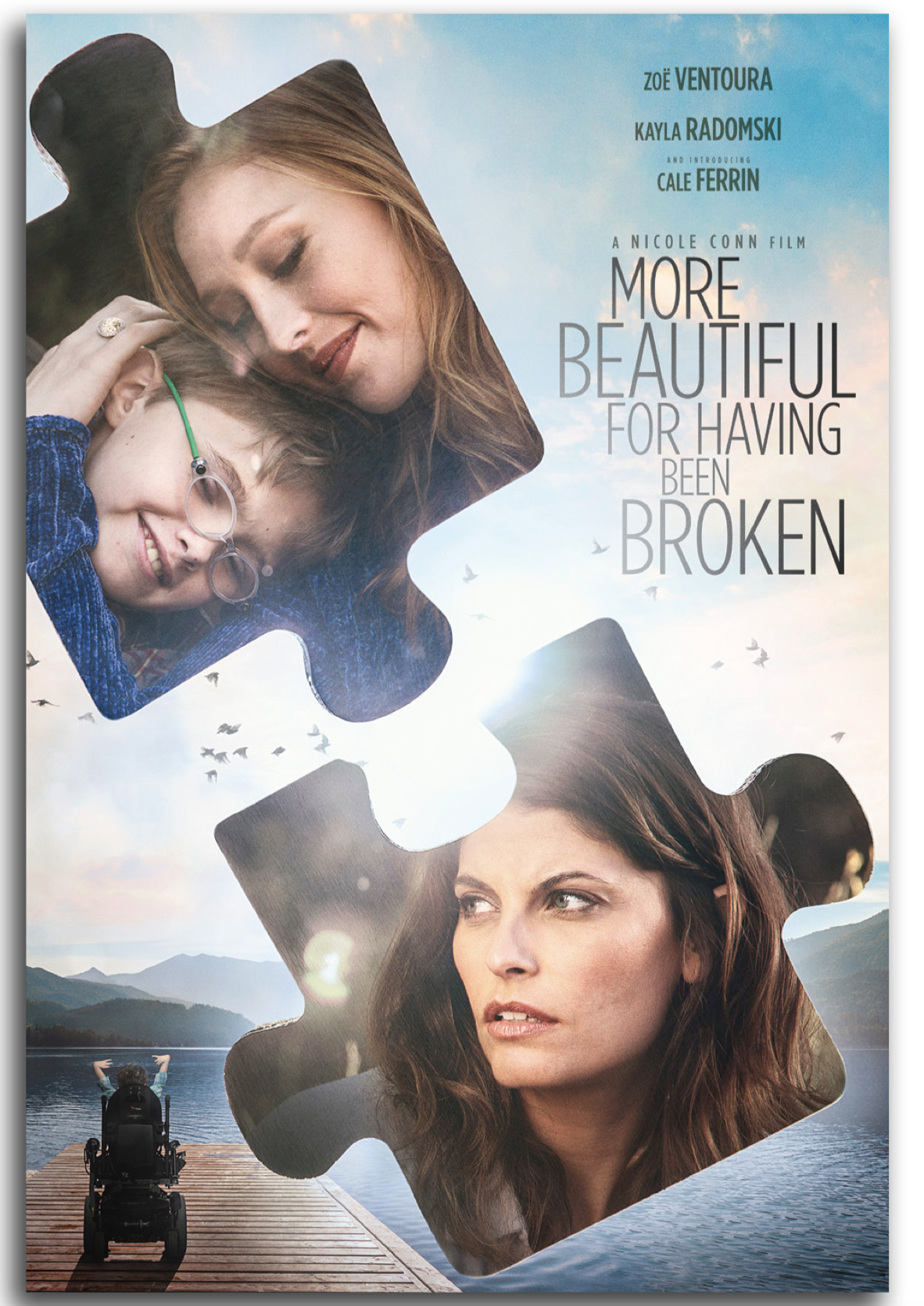 WOLFE VIDEO TO RELEASE THE AWARD-WINNING DRAMA ON DVD, AND VISION FILMS ON VIDEO ON DEMAND

In partnership with Vision Films, Wolfe Video will release “More Beautiful For Having Been Broken” on DVD globally, available to purchase on WolfeVideo.com (in the United States and Canada) and wherever DVDs are sold on April 7th, 2020.  Bonus Material on the DVD will include the film’s trailer, four behind-the-scenes featurettes and deleted scenes.

On May 8th, 2020, “More Beautiful For Having Been Broken” will be made available digitally on all major US and Canadian cable and TVOD platforms. Also, through a special global release event for Nicole Conn fans worldwide, “More Beautiful For Having Been Broken” will be available on May 8th to purchase in all countries without restriction on TVOD and EST through WolfeOnDemand.com. Director Nicole Conn will be standing by on Facebook and Twitter to chat with her fans globally and explain the story behind this very special film that is dear to her heart.

This is an exciting collaboration that will connect Conn’s incredibly personal and extremely touching film to global audiences in well over 100 million homes.

“More Beautiful For Having Been Broken” is a story about three broken women whose lives intersect at a lakeside community and who are forever changed through their shared love of a very special young boy with special needs.

A broken FBI agent, suspended from her job and struggling with the loss of her mother, travels to the small mountain town she used to visit as a child. She is befriended by a special needs boy who possesses the extraordinary gift of healing others through his unbroken spirit and unique outlook on life. Though she is hurting, she begins to see through his eyes as the puzzle pieces fall into place.

The film is the breakout debut for 11-year-old Cale Ferrin who was diagnosed with Fanconi Anemia, a rare genetic disease that can lead to bone marrow failure and cancer and is often marked by congenital defects and short stature.

It stars Australian actress, Zoë Ventoura (Home and Away, Packed to the Rafters) and Kayla Radomski of “So You Think You Can Dance” fame.

A semi-autobiographical film, “More Beautiful For Having Been Broken” is very personal to Conn. The film pays homage to Conn’s daughter and in particular her son, Nicholas, who has special needs and is medically fragile.

“To say ‘More Beautiful For Having Been Broken’ is a passion project is to say climbing Mt Everest is a hike.  The story is inspired by my son, Nicholas and daughter, Gabrielle. I wanted to show who my son is to the world. He is extremely special needs and medically fragile.  After years of being impacted by his world and the experiences of so many other kids with special needs, moms and parents, I wanted people to understand how truly magical our kids are and what they bring to our lives and how they can be the conduit to great love and healing. I also grew weary of our kids being invisible – especially since my son, Cale and so many others who are otherly challenged are the greatest teachers in the world, about what is truly important,” says Conn.

Conn’s journey with her son has been the most intensely spiritual and greatest life education she could ever have asked for; and with this film she wants to show the beauty that comes from what most define as “broken.”

The film’s title was inspired by Kintsukuroi, the Japanese art of repaired pottery (“to repair with gold”).

More than that, it is the art of understanding that the pieces are more beautiful for having been broken. The proof of its fragility and its resilience is what makes it beautiful. Having faced serious challenges throughout this film that almost broke Conn, herself — Conn has adopted this term as a personal mantra.

“There are some films we watch that are so moving and special that they never leave us,” said Lise Romanoff, Managing Director and CEO of Vision Films. “’More Beautiful For Having Been Broken’ is one of these movies and Vision Films is honored to be part of Nicole Conn’s journey as we release the film.”

“We at Wolfe are delighted to continue our 28-year partnership with Nicole Conn in bringing audiences ‘More Beautiful For Having Been Broken,’” says Kathy Wolfe, CEO & founder at Wolfe Video. “Nicole’s fans will appreciate this most personal work of her dedicated and distinguished career as a filmmaker.”

The film was produced by dear friend Lissa Forehan. They were joined by a group known as the “Silver Tribe” – eleven women from all over the world who are Conn’s dear friends and loyalists.

A pioneering filmmaker and an iconic figure in the LGBTQ community, Nicole Conn is known not only for having paved the way for lesbian-themed cinema with her cult classic, “Claire of the Moon” as well as her acclaimed features “Elena Undone” (which boasts the longest screen kiss in cinema history) and “A Perfect Ending,” but also for queer female filmmakers.

Vision Films is a leading independent sales and VOD aggregator specializing in the licensing, marketing, and distribution of over 800 feature films, documentaries, and series from some of the most prolific independent film producers in the world. Led by Lise Romanoff, Managing Director/CEO Worldwide Distribution, Vision Films releases 2-4 films a month across Theatrical, VOD, DVD, and television platforms.  www.visionfilms.net

Founded in 1985 and now celebrating 35 years as the largest exclusive distributor of lesbian, gay, bi and transgender (LGBT) films, Wolfe Video has released some of the most popular LGBT films of the last year, including: 1985; Adam; An Almost Ordinary Summer (Croce e Delizia); Anchor and Hope; Mario; Hard Paint (Tinta Bruta); Hurricane Bianca: From Russia With Hate; Princess Cyd and Where We Go From Here. Wolfe Video has partnered with the most creative voices in the global LGBT film community to bring memorable films to general audiences including the feature debut of Bianca Del Rio in Hurricane Bianca; Katherine Brooks’ Loving Annabelle; Stephen Cone’s The Wise Kids; and Nicole Conn’s A Perfect Ending, Elena Undone, Claire of the Moon and Cynara. Upcoming releases include Retablo; Jules of Light and Dark, Nevrland and Good Kisser. Wolfe’s library of beloved modern classics includes such acclaimed hits as Sordid Lives; Reaching For The Moon; Cloudburst; Undertow and Big Eden. Wolfe’s complete motion picture library can be found at WolfeVideo.com as well as at national and digital retailers such as Amazon, Apple TV, Comcast, Charter, Hulu, Netflix and WolfeOnDemand.com.
Contact: Evan Schwartz, evan@wolfevideo.com