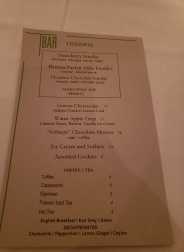 “The staff showcased organization, the cleanliness breathed a welcoming sense of trust, and the lighting screamed have a drink and relax!” 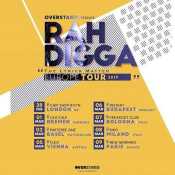 New York, NY (The Hollywood Times) 1/11/19–TBar Steak & Lounge NYC is a destination for deliverance when traveling in via NJ Transit.  I broke out my suit jacket in anticipation of a quiet first-rate dinner.  Moreover, I had to brace myself for the arbitrary spectacle that comes with Rah Digga, the first lady of Flipmode & the legendary rap crew the Outsidaz, as my accomplice.  After missing two trains I saw my partner in crime, for over a decade, rushing into the train station fashionably late. We had 30 minutes to kill before the next one so we got to catch up a bit.

The time was around 8 p.m. and we had only 35 minutes of train time riding to New York’s Penn Station.  Boarding from South Orange, where Digga resides, she was recognized by a fan with elation. I asked him to sit near us for the ride in.  We conversated about her podcast, physics, music, acting and other newsworthy topics. We exited the train, they took a selfie, and we were off to catch a lyft.  While waiting for the car at the street corner Digga was almost flattened by a guy crossing the street backwards in his wheelchair. We dodged that bullet, hopped into a Lincoln, and proceeded on the mission.  I did a bunch of Matthew McConaughey impressions which garnered zero acknowledgement from the driver. I’m thinking he may have been unfamiliar with the commercials or was too focused on giving a professional driver experience.  Next we pulled up to our destination and as the car door opened I could smell the aroma of a fine dining experience. That moment reminded me of my childhood frequenting Zagat rated restaurants all over Manhattan with my Grandmother.  On Sunday’s we would eat before or after seeing a broadway show.

TBar’s location is in a quieter and seemingly cleaner area of the city. Arriving 1 hour late I had pushed back the reservation with no qualms when I called. Arriving later allowed the restaurant to clear out its dinner rush leaving a feeling of tranquility.  The staff showcased organization, the cleanliness breathed a welcoming sense of trust, and the lighting screamed have a drink and relax!

We were seated comfortably and quickly greeted by a pleasantly hospitable waiter.  The bar was visible from our table which provoked a drink order. Digga ordered red wine and I went with tequila.  I was given a generous pour and I was able to savor the liquor as my intention was not to overdo the alcohol. The bread served included 2 pieces of foccacia, a skinny roll, and 2 pieces of olive bread.  We ate most of it and split the roll. I made the rookie mistake eating all of the bread which leads to no dessert. The veteran in me requested oil for the bread. The flavors and texture of the bread paired far better with oil than they did with the butter.  Especially when adding salt and pepper into the oil!

The first appetizer, tuna tartare, came out looking inviting.  My experience with this dish is sparse as it’s not something I was introduced to growing up. Digga gets credit for bringing it up as an early contender. I couldn’t get enough and in hindsight I could’ve eaten it all by myself.  That’s a note for next time! They had a small bed of lettuce in a very creamy tasting vinaigrette on the same plate as the tuna. It was served it with 3 pieces of toasted bread and instead of fighting over the 3rd piece I let Digga have it.  I had to improvise with the last piece of olive bread and use it to cart the last of it. This was the highlight of the meal for me!

The second appetizer was a caesar salad.  At first, I thought the caesar salad was tiny but realized that they split it for us into two. The salad also had a creamy dressing with shaved cheese on top. I took one bite of the flatbread that was placed on top and then just put it on the side of my plate never to be heard from again. The caesar salad was grand but it’s such a popular dish that I will try something different next time or save my appetite for the dessert.

Another shot of tequila but this time I requested Patrón!  I don’t drink enough to know what I’m doing with liquor. I’ll be the first to admit that as I perplexingly requested Patrón Silver when asked which kind of Patrón.  At this point our waiter had to leave but ensured us that we would be taken care of. The service maintained itself as crumbs were removed and food continued to run to the table post haste.

The entrees came out cooked and presented exceptionally. Digga’s NY Strip arrived and was more than enough to guarantee that she’d be eating leftovers at home.  She ordered it with a side of french fries which came separately in a basket. The french fries were good to the taste and led me to stealing more than a few. The last date on Digga’s upcoming tour will be in Paris and this restaurant had a hint of french within its menu on several items. I ordered the crispy orange duck which caught my attention on over everything.  Duck is like tuna tartare to me. I usually don’t choose it and I’m not able to typically find it in the menu. The duck’s skin was crispy, the meat was tender, and the combination of the two was grand. I didn’t enjoy the sweet mashed potatoes I ordered with it.  Next time I will be sure to have something else on the side instead. The overdone color orange on the plate was unappealing.

We left the restaurant with a kind farewell from the owner and the hostesses as we thanked them for a divine dining experience.  I would return there anytime and recommend that everyone and anyone head over to TBar. If you like a quiet atmosphere I suggest going in for a late reservation after 8 p.m. Thanks again TBar you didn’t disappoint!

Check out Rah Digga on her podcast & soundcloud at the links below!

Thank you to the Lawlor Media Group!