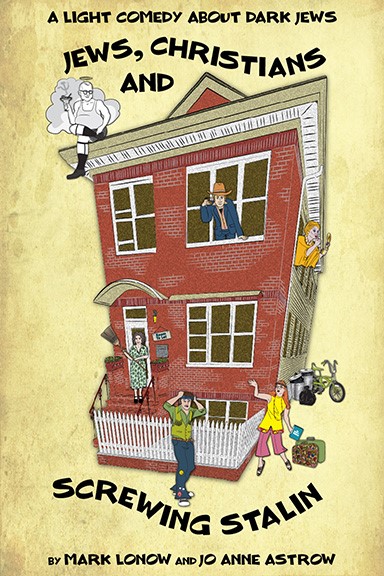 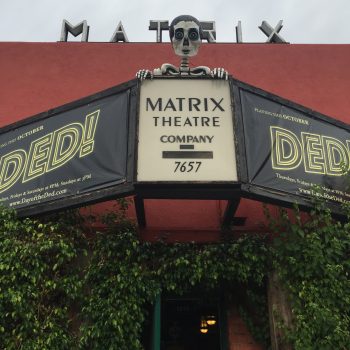 LOS ANGELES (July 16, 2018) — Acclaimed TV and film actor John Pleshette (Knots Landing, Murder One, Curb Your Enthusiasm) and stand-up comedian and actress Cathy Ladman (I’m Dying Up Here, Curb Your Enthusiasm, Scandal) — a late-night favorite who has made numerous appearances on The Tonight Show and has her own HBO One Night Stand special — anchor the ensemble cast of an outrageous new comedy inspired by a true story about “family dysfunction, atonement and matzo balls.” Took A Cab Productions and the world-famous Improv comedy club chain present the world premiere of Jews, Christians and Screwing Stalin by Mark Lonow and Jo Anne Astrow. Lonow directs for an Aug. 18 opening at the Matrix Theatre, where performances will continue through Sept. 23.

On the eve of Rosh Hashanah in 1967, family patriarch Murrray Grazonsky (Pleshette) watches from Paradise as his grandson, Joey, brings his pregnant, Christian fiancé home to meet the radical communist bubby who raised him. Minka Grazonsky (Ladman) is tough as nails — and why not? Her brother was the first president of Stalin’s Soviet Union. When Joey’s alcoholic father shows up at the table, alliances are challenged and new beginnings forged… maybe. L’Shana Tovar!

The eccentric characters who live in the Grazonskys’ Brighton Beach, Brooklyn rooming house are based on Lonow’s childhood memories. Lonow’s grandmother was a Trotskyite. His grand-uncle was Yakov Sverdlov, Chairman of the All-Russian Central Executive Committee, who is regarded as the first head of state of the USSR — a war hero who personally signed the death warrant for Czar Nicholas II and was the lead shooter in the firing squad. Lonow and Astrow recall listening to the radio during Peristroika as Sverdlov’s statue was torn down and the Russian town of “Sverdlovsk” reverted back to its original name, “Yekaterinburg.”

“The play was originally going to be a drama,” Lonow explains. “After Jo Anne and I workshopped it here in L.A., Carl Reiner suggested it might work better as a comedy because the characters are so original and crazy. We agreed, especially after New York producer James Nederlander also loved the idea.”

Lonow and Astrow are no strangers to laughs. Lonow is co-owner of the legendary Improv comedy club chain. His comedy directing career flourished in New York and regional theater. As an actor, he has appeared in countless TV and film projects; he is one of the stars of Thank God It’s Friday, and had a cameo in The Wedding Singer — which he particularly enjoyed, having given Adam Sandler his first break on the Improv stage. Astrow, a Tonight Show and comedy club stand-up headliner, transitioned to personal management; her clients have included Michael Rapaport, Niecy Nash and Lewis Black. Lonow and Astrow, who have been married for 49 years, met as students of Uta Hagan and Herbert Berghoff in the late ‘60s. With his communist background, Lonow was recruited to spearhead the comedy strike of 1978 — along with Astrow, Jay Leno, Elayne Boosler and David Letterman, among others — against the Comedy Store and the Improv. Happily, the Improv settled quickly, and ironically Mark became co-owner in 1979, while Astrow became president of the newly established comics’ union. Lonow and Astrow were the subject of the ABC sitcom How to Live with Your Parents (For the Rest of Your Life), written by their daughter, TV creator and showrunner Claudia Lonow. The couple produced HBO’s Emmy-nominated and Grammy Award-winning comedy special Black on Broadway starring Lewis Black, and, most recently, co-produced the off-Broadway hit Cruel Intentions: The Musical.

“I was a red diaper baby,” says Lonow. “Brighton Beach and Coney Island, where I grew up, were hotbeds of communism. Many of my relatives were young revolutionaries and then union organizers when they came to this country. Paul Robeson sang ‘Ol’ Man River’ to me when I was four years old while I sat on his knee at a fundraiser at the Workman’s Circle.”

World premiere of Jews, Christians and Screwing Stalin — Took A Cab Productions and the world-famous Improv comedy club chain present an outrageous comedy, inspired by a true story, about family dysfunction, atonement and matzo balls. On the eve of Rosh Hashanah in 1967, Joey brings his pregnant, Christian fiancé home to meet the radical communist bubby who raised him. Minka Grazonsky is tough as nails — and why not? Her brother was the first president of Stalin’s Soviet Union. When Joey’s alcoholic father shows up at the table, alliances are challenged and new beginnings forged… maybe.

Where: A guest production at the Matrix Theatre
7657 Melrose Ave.
Los Angeles, CA 90046
(west of Stanley Ave., between Fairfax and La Brea)