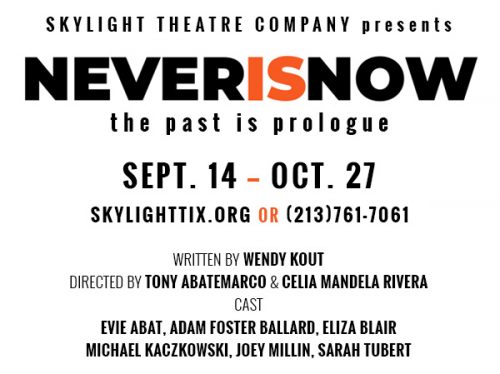 At the Skylight Theatre, the past is prologue: Wendy Kout’s daring play within a play illuminates today’s ugly realities while recounting the dark legacy of the Nazi genocide.  The first run of this play ends this weekend on October 27th, so purchase tickets today.

Hollywood, CA (The Hollywood Times) 10/23/19 – It is easy to imagine the arguments against producing Never Is Now by a theatrical company. Don’t modern audiences want sweet and sassy, light and funny theatrical experiences where they can escape from the harsh realities of the Trump administration? Profound dramas can prove difficult to digest because they confront issues we would rather avoid. Beginning in the legendary time of Aeschylus and Sophocles in Ancient Greece, the very essence of theatre has transcended mere entertainment. Beyond entertainment, theatre, at its historical core, asks the audience to question hubris by drawing disparate connections. Indeed, as written by Wendy Kout, Never Is Now is a brave child of this essential legacy. 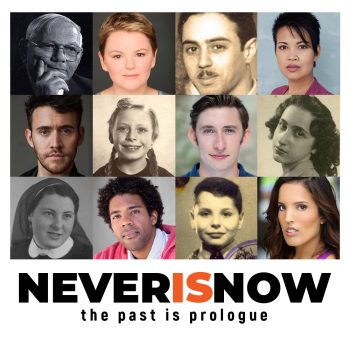 At the Skylight Theatre on Vermont Avenue in Hollywood, producing artistic director, Gary Grossman has never backed off in the face of such a challenge. Instead, he chooses to produce the difficult stories, knowing well that enlightenment and discomfort have been close partners throughout recorded history. He wants to see what happens when millennials in a play within a play act out the firsthand accounts of Holocaust survivors. Moreover, what happens when these young performers from 21st century Los Angeles experience the resonance of such atrocities? How will they respond as they become aware of these “undesirables” from the past and the dark parallels to their own lives?

Adapted from Wendy Kout’s Survivors that was developed and produced by the CenterStage Theatre at the Louis S. Wolk Jewish Community Center of Greater Rochester, New York, the success of Never Is Now is closely connected to the play’s initial set-up as a play within a play. As several Millennial actors rehearse with their Director a play that must be quite similar to Wendy Kout’s Survivors, questions are raised about the meaning of the play and its implications in their own lives. Seeing how the lives of these Jewish men and women were first disrupted, then eventually destroyed, by the evil of Nazi Germany, they consider how their lives are presently under siege during the Trump presidency. Although Trump is never mentioned by name, his presence stains the shadows.

At the center of the production, Joey Millin, as the Director of the play within the play, keeps the narrative moving forward while negotiating the questions and personal challenges of the ensemble. Faced with the plight of the so-called “undesirables” in Nazi Germany, the actors must come to terms with their battles in a 21st century United States that no longer feels like the land of the free. Perhaps still the home of the brave, they must find the courage to move forward in a political climate where they themselves are suddenly “undesirable.”

For example, Adam Foster Ballard fears his family will be forced to choose between being deported back to Haiti or going into hiding. He wonders where he fits into the darkened tapestry of this new country. As a young LGBTQ woman, Eliza Blair feels lost in a world where she should feel accepted. Suddenly, it feels like all the advances of the past are being taken back by the intolerance of the religious right. But why? Although both these storylines are compelling, they lack the tangible resonance of one storyline that breaks the heart of the audience.

An understanding of this resonant storylines requires an awareness of the real-life challenges of the actor playing the role. When she was just three-years-old, Sarah Tubert endured a botched surgery that ended up taking most of her hearing. She also ended up with a severed facial muscle and permanent paralysis on the right side of her face. Her disability is readily apparent on the continual natural beauty of her countenance. Indeed, this disability enhances her charisma, making her character a breath of fresh air that rings with authenticity.

In a Burbank Leader article about the challenges that she faced as a child, Sarah Tubert says, “Growing up, it was a little hard for me because I was very self-conscious and I was very closed-minded… I felt like I couldn’t do a lot of things. I remember going up to my parents and telling them I was the dumbest one in class. I really didn’t realize what I could accomplish.”

In a moment during the play that proves emotionally jarring and undeniably powerful, Sarah Tubert’s character realizes that the disabled were categorized as “undesirables” in Nazi Germany. She screams out as she comes to terms with this putrid realization. Indeed, in Hitler’s evil regime, she would have been sent to a concentration camp and exterminated because of her disability. The reality of this moment resonates in the theatre as the weight of history falls forcefully on the shoulders of those present. Such a reality is even more potent upon the realization that the historical stories in the play within the play are actual survivor accounts of the Holocaust.

Given the power of this moment, both true and fictional at the same time, writer Wendy Kout was asked about the difficulties of writing fiction about nonfiction. After the play, I asked the playwright a few very specific questions: “In light of the historical impact of the survivor’s stories, is there a sense of profound responsibility to do them justice in this context? How did you manage to negotiate that responsibility and your creative presence as a dramatic playwright?”

A smart human being overflowing with warmth and enthusiasm, Wendy takes a deep breath, considering the question. With a compassionate smile, she says, “In writing fiction, I’m responsible for realizing my vision. But it’s a far greater responsibility to realize non-fiction. Since Never is Now contains both, I was required to first be an accurate historian and then a dramatic playwright. The survivors and their families entrusted me, and this enabled me to trust my sensibilities. They also inspired me as I hope they inspire our audiences. Telling their stories for the stages and schools in Rochester and Skylight stage has been the most profound responsibility and honor of my creative life.”

Given this profound responsibility, it does not seem that any of us truly have the right to judge whether she did justice to these stories. Instead, only a survivor who stands on the same bedrock of history as the true stories included in the narrative should make such a call. In a Beyond Conversation talk after the show that featured Rabbi Stan Levy and Los Angeles Anti-Defamation League (ADL) Regional Director Matt Friedman, a survivor of the Holocaust appears as well. Born Éva Paula Ádám in Hungary, Eva Nathanson is a Jewish grandmother and an artist. Today, she donates her time and energy as a volunteer witness speaker for the Los Angeles Museum of the Holocaust. When Eva Nathanson tells her story, the attentive silence of the audience reflects both respect and admiration.

After the Beyond Conversation talk, I ask Eva Nathanson if the play within the play approach works for her? Was she okay with the parallels drawn between Trump’s America and Nazi-occupied Europe that she barely escaped with her life? Indeed, she mentions that 96% of her extended family died in the concentration camps.

When asked this question, Eva Nathanson does not hesitate. With a confidence born of grace, she says, “The play was very meaningful for me because I am afraid today for the first time since I came to this country. I cannot believe what’s happening. It feels like the same progression that happened in Nazi Germany, and this is why the play was so powerful for me.”

Is there anything else that needs to happen beyond a simple directive: Find the time this weekend and see this powerful production. After all, Never Is Now is more than just a title. Arguably, it’s a phrase that encompasses the scariest reality of the present day.