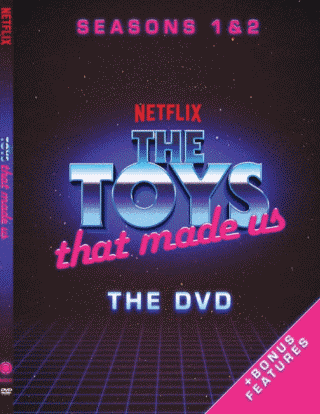 What a great idea to create this collectible 8-episode documentary series on ‘The Toys That Made Us’.  In my opinion, this is a DVD set that every household should own.  WOW!  I sat  my sons and grandsons down in front of the TV and played both of these Seasons for them to watch.  My Sons, who are 34 and 28, grew up with Star Wars figures I bought for them, as well as Transformers and He-Man. My younger grandsons 16 & 9, love Star Wars, G.I. Joe, Transformers and especially LEGOs.  We all really enjoyed watching how these toys, that I loved as a child and they got intoduced to by me, unfold in front of our eyes.  They are amazing stories of the toy manufactures who brought these toys and actions figures to life for us to enjoy as a child and as collectors in our adulthood.

My soon-to-be 50 year old Sister is in love with Hello Kitty and has everything imaginable made.  I had more G.I. Joe action figures than Barbie, but I was a Tomboy.  I started collecting Barbies in my 40s and have a great collection of the Holiday Barbies. I have had my shares of LEGO sets and was amazed to see how the company got it’s start.  All the episodes are full of great tell-all stories of the toy company that got the deal to make the toys and the secrets behind them all.

I sure hope there are going to be more seasons are to follow, so many toys out there to bring their stories of creation to life.

You can get the DVD set on amazon

This 2-Disc DVD set would make an excellent Father’s Day gift, so get one today and wrap it for good ole Dad. He will really appreciate it. The DVD set also has Bonus Features with deleted scenes from a Star Trek episode and a featurette with show creator, Brian Volk-Weiss.

Check out the Season 1 Trailer and Season 2 Trailer!

The Toys That Made Us is an American television series created by Brian Volk-Weiss, the founder of Comedy Dynamics.  The first four episodes of the series began streaming on Netflix on December 22, 2017, and the next four were released on May 25, 2018.  The 8-episode documentary series, as it was originally touted, focused on the history of important toy lines.  The first four episodes focus on the Star Wars, He-Man and G.I. Joe toy lines with subsequent episodes featuring LEGO, Transformers, Hello Kitty, and Star Trek.

Screen Media Ventures, LLC, a Chicken Soup for the Soul Entertainment, Inc. (Nasdaq: CSSE) company, acquires the rights to high quality, independent television series and feature films for the US and Canada. With a library of over 1,500 television series and motion pictures, Screen Media Ventures is one of the largest independent suppliers of high-quality tv series and motion pictures to U.S. and international broadcast markets, cable networks, home video outlets and new media venues. For more information, visit:www.screenmedia.net

About Comedy Dynamics
Founded by Brian Volk Weiss, The Nacelle Company develops, produces, and distributes feature and documentary films as well as TV shows – both scripted and unscripted.  Nacelle’s vast array of partnerships include: Netflix, Amazon, HBO, Discovery, A&E Networks, Hulu, Viacom, and many more.  The Nacelle Company has produced the hit Netflix docu-series, The Toys That Made Us, CW’s Discontinued and Netflix’s Kevin Hart’s Guide To Black History.