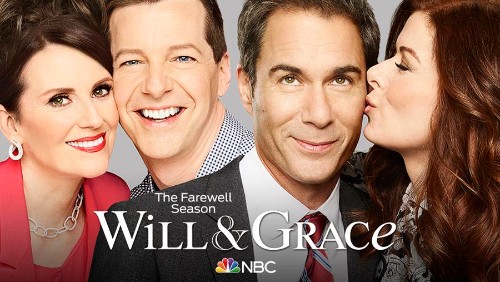 The NBC sitcom is taking a trip to 623 E. 68th Street—home of the Ricardos and Mertzes—by recreating classic moments from I Love Lucy.

Next week’s episode will feature three dream sequences, with Grace, Jack, and Karen all taking turns playing Lucy in “re-imagined versions of iconic scenes from the original series.” Debra Messing will play Lucy in the “Vitameatavegamin” commercial scene; Sean Hayes will take over Lucy duties for the chocolate factory “Job Switching” scene; and Megan Mullally will stomp grapes as Lucy from the “Lucy’s Italian Movie” episode.

Eric McCormack will play Ricky Ricardo in all three scenes, with other cast members rotating in the roles of Fred and Ethel.

At the end of 2016, Bob Greenblatt invited us to lunch. Over light salads with lean proteins, he asked us to bring “Will & Grace” back to NBC. He only had two requests: write the show with the same heart and humor as the original, and consider doing something that pays homage to “I Love Lucy.” So it gives us enormous satisfaction to share “We Love Lucy,” a very special episode of “Will & Grace” that airs Thursday, April 9 at 9 p.m. ET/PT.

Mr. Greenblatt’s request to weave television’s greatest situation comedy with our show seemed easy enough. “Will & Grace” has the same blueprint as “I Love Lucy”: a couple at the center of the show and their neighbors. We also had the added benefit of a leading lady with vibrant red hair and a fearlessness when it came to physical comedy.

However, nothing about making “We Love Lucy” was easy. It required every member of our production – from wardrobe to hair & makeup to props to set design to post-production – to go above and beyond, not to mention what was asked of the actors. For example, we custom made 45 costume pieces and built exact replicas of the Ricardo apartment, candy factory, Italian wine vineyard and television studio from the Vitameatavegamin commercial. See’s Candy made the same milk chocolate-covered buttercream candy they did for the original scene – 14,000 pieces to be exact. We brought in 1,200 pounds of black grapes for the wine-stomping scene, cast 48 bottles to match the original Vitameatavegamin prop (the 1953 Geritol bottle) and each actor endured five hours of makeup per day to make the transformation into the iconic characters.

Creatively speaking, the writers’ room didn’t just want to remake an episode frame for frame. We wanted to bring our DNA to this classic show. Our story begins with Will and Grace debating whether Lucy or Ricky who was the “engine” of “I Love Lucy.” Throw Jack and Karen’s attitudes into the mix and we had the framework for the episode you are about to see.

None of it would have been possible without Lucie Arnaz graciously giving us her blessing, and even more, she was willing to participate in the episode. Ms. Arnaz was able to turn a cameo into a tour de force performance as the authoritarian supervisor at the chocolate factory.

Writing and producing “We Love Lucy” was definitely the most production-heavy, technically challenging episode we’ve ever attempted, but it was perhaps the most satisfying in the end. We hope you love watching “We Love Lucy” as much as loved making it.  – Enjoy, Max and Dave

MORE ABOUT “WILL & GRACE”
“Will & Grace” returned to NBC on Sept. 28, 2017 and stands as the network’s most-watched comedy in seven years. Originally debuting in 1998 and cementing its place in the cultural zeitgeist among critics and fans alike, “Will & Grace” has been nominated for 91 Emmy Awards, winning 18 of them, including Outstanding Comedy Series. The series has also earned seven SAG Awards among dozens of other kudos, and the show is one of the few in TV history where each member of the cast won an Emmy.