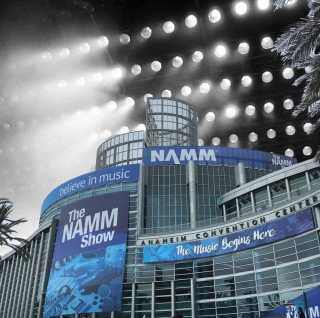 Anaheim, CA (The Hollywood Times) – January 25, 2019 – The NAMM TIMELINE began in 1901 when 52 members of the National Piano Manufacturers Association of America formed the National Association of Piano Dealers of America. It’s first annual trade show and convention was held in Baltimore, Maryland the following year with membership dues at $5.00 per store. You’ve come a looong way, baby! Celebrated as the place to be for four days yearly – The 2019 NAMM Show at the Anaheim Convention Center ran January 24th – January 28th.

It’s where the “global leaders of the music products, pro audio and event technology industries gather at the Crossroads for new product introductions, business opportunities, networking and fresh inspiration.”

Or as a drummer friend of mine said, “I love NAMM. It’s Disneyland for musicians!”

NAMM is overwhelming in the loudest and wildest of ways with so much to see and experience – just being a music lover qualifies your presence. I went two days – Thursday and Saturday – with my good friend, Drake “Munkihaid” Shining. You can’t see all that NAMM has to offer in a few days (or in all four) but we were focused on what we wanted to accomplish.

Drake – is currently the keyboardist for The Sugaray Rayford Band and a 40-year veteran in the music biz and he was looking to secure an endorsement for an organ he had his eye on as well as meeting up with people he has played with over the years.

Having been fortunate to have met and interviewed the late Les Paul, then age 90, in the basement of NYC’s Iridium Jazz Club, I love anything Gibson. Having been a no-show last year, Gibson returned to a familiar spot at 207 on NAMM’s second floor amongst other big players like, Marshall, Taylor, ESP and PRS. It was packed and Paul’s presence was felt.

After meandering around we took a break to eat and I raced downstairs a few halls over to surprise an old friend I hadn’t seen in over 7 years, Mitch Hodesh, co-founder and creative director for Flash Music USA.

Mitch has been playing guitar while creating and marketing guitar accessories for years. He’s the inventor of Dunlop’s TeckPick, Ice Pix Stix and the Shred Pick.

I even ran into my local Trader Joe’s cashier who told me he bought a guitar not because he needed it but because, “I couldn’t pass up the price. I got it at cost!” Such are many of the deals that can happen if you’ve done your homework or cultivated relationships.

When we came back for the second day, Drake met up with his good friend, Frank Simes. Frank has a few credits under his belt, like: He’s a Grammy nominated, platinum awarded musician, guitarist, singer/songwriter, musical director, record producer. Simes wrote the liner notes for The Who Hits 50! Compilation album, has been musical director of The Who, musical directs for Roger Daltrey’s shows and has recorded and performed with Mick Jagger, Don Henley, and Stevie Nicks, to name a few. His own band, Topcat plays locally when he and Drake aren’t touring.

With Frank dropping by Viscount Organs the two musicians took turns playing, catching up while the duo knew that Drake had his eye on an organ for the next leg of his tour with Sugaray. The Viscount Legend Live fit his requirements for good sound, portability and reliability. Long story short, while Shining didn’t get a full endorsement, he got a great deal (below artist’s price) on his new love and to sweeten the deal they even threw in a case. Part of an artist’s mission at NAMM is to either establish or maintain a relationship with manufacturers. One of Drake’s endorsers, Quilter Labs gave him a new amplifier to try. This is how their products are seen and tested.

I saw a sign that said Dave Ellefson, the bass player for Megadeth, had been there the day prior and I had missed him. I’ve known Dave and his wife, Julie since the group’s Rust in Peace album. Memories weren’t meant to be revisited this visit – yet in so many other ways new ones surpassed any I’ve had.

As in life, it’s the friendships you know and the ones that grow that ground us. Some we leave behind but they’re not forgotten – just reminders of what a rich experience one can have by showing up. Or as my late friend, Hubert Selby, Jr. said, “Just say YES to life!”

Or to next year’s NAMM.