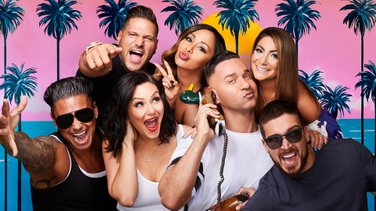 EP SallyAnn Salsano addressed the media with her own heartfelt recollection of how the concept of the reality show was formed and created by the thought “why not show the world what everyone does when a bunch of 20-year-old Jersey natives rents a summer house by the Jersey Shore”; hence, the creation of  “The Jersey Shore” Reality show .

Both Salsano EP and Doron Ofir CD spoke about how they sought  to cast the show with the most authentic and actual Jersey Shore residents attitude and dialectic intonation.

Then, to everyone’s surprise, the  actual casting tapes from the original “Jersey Shore” casting sessions were played from before the actual series prior to 2009.

The “Jersey Shore” Reality series ran from 2009 – 2012. Now, five years, five kids and three marriages later, the gang gets back together to family vacation in Miami “Jersey Shore” style .

The series has been revitalized with a reunion of the original cast now called MTV “Jersey Shore Family Vacation,” in which the Jersey Shore group goes on family vacation to a swanky house in Miami Beach.

Mike “The Situation” Sorrentino sat down with the media and expressed his personal dedication to sobriety and how he has changed his whole life around and has been sober for several years. Now Mike is lecturing around the country at different rehab centers sharing his story about his struggles to get sober and his new sobriety.  Mike “The Situation“ is very different now and he is very proud to announce that he and his fiance will be married this Summer.

The luncheon was fabulous to see how the cast was formed and the concept grew and how all the actor’s lives have grown up and married with the new show on MTV “Jersey Shore Family Vacation.”