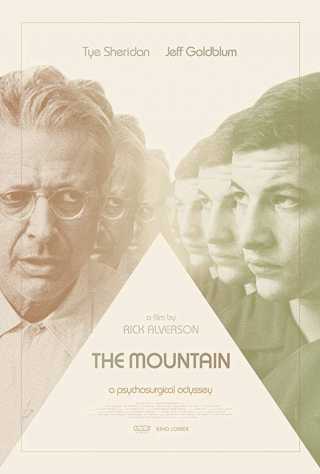 Rick Alverson’s surreal and anti-nostalgic look back at the utopian memory of the 1950’s, The Mountain, opens in Los Angeles and New York on July 26th. Jeff Goldblum and Rick Alverson will participate in a Q&A on Saturday, July 27th at Landmark’s Nuart Theater following the 7:00pm show.

The Mountain, from writer/director Rick Alverson (Entertainment, The Comedy) and co-writers Dustin Guy Defa and Colm O’Leary, has been an Official Selection at the 2019 Sundance Film Festival, SXSW Film Festival, and BAMcinemaFest, and comes with praise for it’s unearthly tone and production design as well as it’s commentary on the forced censorship and lobotomizing of young ladies in the 1950’s as a dark mirror to our present treatment of outspoken women. The story follows the young, quiet, and lumbering Andy (Tye Sheridan) as he travels from asylum to asylum taking pictures of lobotomy patients. The film begins with Andy working at an ice rink under his emotionally distant father, forbidden from seeing his mother after her apparent institutionalization. However, after his father dies at the rink, Andy is visited by a “friend of his father’s” named Dr. Wallace Fiennes (Jeff Goldblum) who offers him a job as his traveling aide and photographer. Dr. Fiennes seems to be the first man in Andy’s life to take an active interest in him and the two develop an uneasy sort of father and son bond. However, Andy never loses sight of the lingering possibility that Dr. Fiennes is not the warm medical professional he appears to be and that he and Fiennes are likely contributing to the same system that stole away his mother.

The film’s mood is set immediately, with the stark image of a twirling figure skater in a bizarre dream sequence swathed in a grey color palette and accompanied not by music, but ice skating sound effects and Andy’s own slow, hushed, and languid manner of speaking. This opening is emblematic of many elements of the film. The most obvious being the coloration and production design. Everything from the sets to the costumes contains the same kind of washed out coloration. A greyed, frayed, and slightly desensitized quality no doubt meant to be evocative of the dulled state of mind of many of Dr. Fiennes’ victims. Jacqueline Abrahams channels her work on films like The Lobster (2015) to create a dim and dismal sense of place that makes the actions and complicity of the characters all the more unsettling. The cinematography is on full display here as well, emphasizing the first of many strong tableaus that almost feel reminiscent of stageplays. The next most obvious tonal element is the soundscape. It’s rare to hear any non-diegetic sound in The Mountain, with most scenes consisting of more environmental noise than dialogue and music appearing infrequently and mostly from in-universe sources. Though this makes for a wonderfully ambient sense of place, the lack of musicality combined with the pause-filled, spare, non sequitorial dialogue can often make the emotional purpose of a scene ambiguous to the point of confusion.

Again, a comparison to Yorgos Lanthimos’ The Lobster is apt, as the dialogue in The Mountain is similarly stilted and awkward for purposeful effect. In order to add to the somber tone, dialogue is delivered in slow and often disconnected ellipses, often without characters responding to whoever is speaking. The monotonous delivery of lines from most of the cast is a cruel reflection of a docile population pacified by the promise of a present utopia that has led them to accept a practice as senseless as lobotomy for the purpose of upholding this utopic illusion. Form reflects content in The Mountain, the characters in the film talk and move so slowly and disconnectedly that it’s hard to tell who has and has not been lobotomized, a representation of how lobotomies contort vibrant human spirits into a dulled vessels for “normality.” When face to face with the depths of human cruelty one can either keep watching or turn away. Andy chooses to keep watching what the rest of the country has turned a blind eye to and, slowly, it changes him. However, this shift in character happens so gradually that it makes a large portion of the first act ploddingly slow and the character of Andy difficult to connect to. While this may be an attempt to mirror Andy’s own emotional distance from the people around him by building an emotional distance between the audience and the characters, it still comes across as perplexingly boring until we get on the road with Dr. Fiennes and discover what the story is truly about. Andy’s apparent lack of drive and motivation makes him serve as a kind of surrogate for the lobotomized. He exists in loose opposition to Dr. Fiennes but has been made too numb and disaffected to act on these pangs of discomfort. Instead, he shambles forward for so long and in the face of such blatant cruelty and hypocrisy that it begins to strain the limits of believability.

Opposite Tye Sheridan’s Andy is Jeff Goldblum’s Dr. Wallace Fiennes, a character loosely based on neurologist Walter Jackson Freeman II, who traveled across the US performing lobotomies. Goldblum’s Dr. Fiennes is struggling to rationalize his methods in the waning days of lobotomies and during the rise of contemporary psychiatry. Fiennes is also, ironically, a lover of the very same types of women he is likely lobotomizing. Goldblum’s natural charisma is essential to lending any likability to this butcher of brains but the dialogue and direction often do not give him enough time to build more of a sense of affability that would make Dr. Fiennes the convincing svengali the story tries to sell him as. That being said, his dramatic realizations towards the end of the film are genuinely moving and harrowing since Dr. Fiennes begins to realize that he may be more of a contributor to psychological unrest than a mender of minds.

Roughly halfway through the narrative we are introduced to the two most exciting characters of the entire film and it is a shame that they were not present during the slog of a first half to inject much needed emotion, weight, and unpredictability into the story. These are the subdued free spirit, Susan (Hannah Gross), and the unstable and controlling Jack (Denis Lavant). Susan is symbolic of all the women Dr. Fiennes has been working on, a playful and promiscuous lady, but not one who hears voices or indicates any violent or destructive tendencies. Unfortunately for Gross, Susan does not have enough time to properly express her character and endear herself to both the audience and the cast before becoming more of a prize for protagonist Andy to win. Her father, on the other hand, is a rambling drunkard who is prone to explosive bouts of anger as he delivers long deranged monologues that vacillate between English and French from word to word for nearly the entire final twenty minutes of the film. His manic energy is transfixing and makes one wish that this element of surprise was peppered more throughout the entirety of the film instead of relegated entirely to the back half.  It’s almost hard to type, but Denis Lavant delivered the most intriguing and captivating performance in a movie starring Jeff Goldblum.  His character also drives home the sexist gender divide of the time and prompts the most reflection from the viewer as we are made to wonder how this insane man could be deemed “healthy” while his comparably muted daughter is forced to undergo a lobotomy.

As alluded to earlier, The Mountain takes its time to get moving and trudges forward in the same glacial manner as its characters. It takes a while for Andy to meet Jeff Goldblum, get on the road, and really understand the gravity of what he is partaking in. This makes the tens of minutes that precede Goldblum’s introduction drag as the sparse dialogue means that we have only a vague idea of who Andy is. Even once the plot seems to be trotting along, it turns out that the true emotional core of the movie is absent for nearly half the runtime. That is, the relationship and parallels between Andy and Susan, which becomes the crux on which the rest of the story’s conflict rests, does not feel adequately established. This robs the story of much of the emotional weight that is meant to carry the viewer through the final act. Yes, there is an inherent connection between Andy and Susan, but there isn’t enough raw time put into developing their camaraderie as a mutual exchange to justify how it affects Andy and the rest of the narrative. As a result, some of the hope and tragedy that is meant to come through the end of the film feels more trivial than it should. The film also reaches what feels like a pretty natural emotional climax in the third act and then also continues for tens of minutes longer. It feels like a narrative energy has been simmering for most of the film and that it finally hits a rolling boil before the heat is turned down again and left on low. Most of the remaining runtime then sees the characters acting even more flatly than before and is entirely held up by the raw energy and intensity of Lavant’s Jack, who spends most of the time in a rapturous frenzy that, while entertaining, can grow confusing and tiring to watch continuously. Overall, this makes the pacing of the film downright frustratingly slow at times and can end up distracting a viewer from the subtext instead of giving them space to consider the relevance of the film’s themes to today.