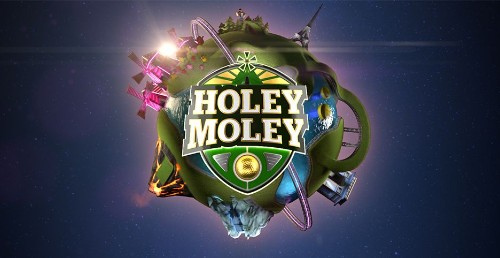 “Power of the Fanny Pack” – The episode opens on the massive Arc De Trigolf where one contestant finds himself in the water before he realizes that his ball didn’t even make it across the arc. Later on, this challenging hole trips up two more competitors as both fall into the icy water while attempting to get across before their ball does. Meanwhile, Stephen Curry gives contestants advice for Slip N Putt, where there is a photo-finish race to the top of the glacier. Over on The Distractor, a firefighter contestant looks to come out on top over the fire-breathing distraction.

In the nail-biting final round of Mt. Holey Moley, all three finalists nearly miss the landing from the zip line, which would cost them a one-stroke penalty, but that doesn’t stop one competitor’s hat from flying into the water! Joining in is none other than gymnast and three-time Olympic medalist Gabby Douglas, who not only helps out commentating but shows off some fun tricks on Log Roll as well. More surprises await during “Power of the Fanny Pack,” airing WEDNESDAY, MAY 20 (10:00-11:00 p.m. EDT), on ABC. (TV-PG, L) Episodes can also be viewed on demand and on Hulu. (Rebroadcast. OAD: 8/22/19)

“Holey Moley,” ABC’s fan-favorite mini-golf competition series with Rob Riggle, Joe Tessitore, Jeannie Mai and resident golf pro Stephen Curry features 12 mini-golfers facing off in a series of head-to-head matchups. Winners will move on to round two and from there, only three will make it to the final hole – the daunting “Mt. Holey Moley.” At the end of each episode, one winner will be crowned and walk away with the $25,000 prize, “The Golden Putter” trophy and coveted “Holey Moley” plaid jacket.

Featured contestants include the following: