The first single “Vinyl” is being serviced to AAA, Blues and Americana radio. 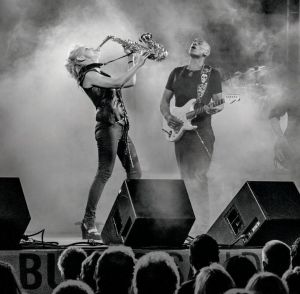 Since her debut in 2000, Mindi has released seven solo albums, and most recently, a live album with The Boneshakers.

She’s collaborated on stage and in the studio with a wide cross-section of legendary peers, all helping to solidify her status as one of the most recognized and in-demand saxophonists. During her career, she has garnered ten #1 radio hits, six Top 5 solo records and two #1 spots on the Billboard Contemporary Jazz album chart.

Following a two season run as the featured saxophonist on American Idol, resulting in her touring with Aerosmith, Abair released her solo album Wild Heart in 2014. The album, which included collaborations with the late Gregg Allman, Joe Perry and Trombone Shorty, showcased an edgier side to the saxophonist/vocalist and earned her a GRAMMY® nomination for Best Contemporary Instrumental Album.

When it came time to tour the album, she recruited longtime friend and The Boneshakers founder Randy Jacobs (Bonnie Raitt, Was Not Was, Willie Nelson) to inject his brand of Detroit Blues Rock to the live shows. She and the band had an irrefutable chemistry that quickly led to a permanent creative collaboration. Their first record, Mindi Abair and The Boneshakers LIVE in Seattle was recorded during their first official show together and released September 2015.

After touring nonstop for two years, Mindi and the band headed into the studio earlier this year to record their sophomore album. Five days at EastWest Studios resulted in an 11-song compilation that showcases her prowess, artistic versatility and wide-ranging musical influences. Bandmate Randy Jacobs commented “No one since Junior Walker has brought saxophone and vocals in one package to the forefront of modern music, with a raucous tone and abandon.”

Written in less than two hours with Nashville-based writer Jerry Flowers, the single “Vinyl” is a pulse thumping, rock fueled soul track that lyrically likens a needle fitting into the groove of a vinyl record with falling in love…”I’m in your groove like a needle on vinyl”. “Play To Win” written with Rob Kleiner (Sia, ZZ Ward, Cee Lo Green) and Patrick Windsor is an anthemic track featuring heavy-hitting, meaty guitar riffs and driving drums fit for an arena. Featuring modern day King of Blues Joe Bonamassa, on “Pretty Good For A Girl” Abair shares her disdain for the regularly doled out backhanded compliment, while making a statement about self-empowerment.

This arousing track is peppered with boisterous sax and gritty, face-melting blues guitar riffs from Bonamassa. During a writing session in Oakland with 2017 GRAMMY® winner Fantastic Negrito, he played her “She Don’t Cry No More,” written for a women who was a mother-like figure to him. This emotionally evocative rootsy blues song chronicles her story of no longer being in pain and suffering after her passing.

“Everyone is such a force of nature in this band,” says Mindi. “I wanted to create the right vehicle to showcase everyone and capture the swagger of what we do live.”

Track List: Mindi Abair and The Boneshakers The EastWest Sessions (available wherever digital music is sold)

Checkout Mindi Abair’s Pretty Good For A Girl website, it is inspirational to say the least. Great stories and T-shirts and jewelry: https://www.prettygoodforagirl.net/

PRETTY GOOD FOR A GIRL’S MISSION

Our mission is to lift up women… we need to celebrate each other. Are you breaking the glass ceiling? We all are in our own way.  This site is here to empower us to appreciate excellence in each other, celebrate it, and motivate each other towards our own individual greatness in the process.  Inspire and be inspired.

We should support each other’s endeavors, knowing this will lift us all up.  Let’s make “PRETTY GOOD FOR A GIRL” our battle cry, our motivation.  Motivation – Inspiration – Appreciation – Celebration.

About Mindi Abair and The Boneshakers

One of the most recognized and sought-after saxophonists, two-time GRAMMY nominee Mindi Abair has been electrifying audiences with her dynamic live performances and sax prowess since her debut album in 2000. No one since Junior Walker has brought saxophone and vocals in one package to the forefront of modern music, with a raucous tone and abandon. She has garnered ten #1 radio hits, six Top 5 solo records and two #1 spots on the Billboard Contemporary Jazz album chart. In 2014, Mindi received her first GRAMMY® nomination in the Best Pop Instrumental Album category, followed by a 2015 GRAMMY® nomination for Best Contemporary Instrumental Album for her solo LP Wild Heart featuring the late Gregg Allman, Joe Perry, Trombone Shorty, Booker T. Jones, Keb’ Mo’, and Max Weinberg. 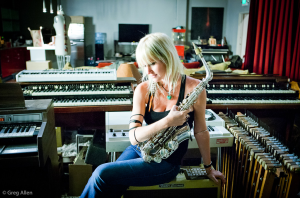 The daughter and granddaughter of working musicians, Abair continues to captivate fans while evolving her sound. In 2014, after two seasons as the featured saxophonist on the hit series American Idol, Abair released Wild Heart. This LP showcased a compilation of grittier rock and soul tracks featuring some of the biggest names in music. To help translate this sound to her live shows, Mindi enlisted longtime friend and The Boneshakers founder Randy Jacobs (Bonnie Raitt, Was Not Was, Willie Nelson) to inject his brand of Detroit Rock/Funk. The collaboration was undeniable, and it lead to an almost immediate decision to join forces creatively. Mindi Abair and The Boneshakers features Mindi (Saxophone, Vocals), Randy Jacobs (Guitar, Vocals), Sweet Pea Atkinson (Vocals), Rodney Lee (Keys), Derek Frank (Bass, Vocals), and Third Richardson (Drums, Vocals). Their first record together Mindi Abair and The Boneshakers LIVE in Seattle was released September 2015, and recorded at their first official show together in Seattle February 2015.

Rena Strober and Imagine That! A magical musical journey of the music from Sesame Street