Gives Local Youth Opportunity to Voice Concerns with Mayor Garcetti and Director of L.A. County Public Health Dr. Barbara Ferrer About How to Navigate Life During the COVID-19 Pandemic.

Southern California’s flagship PBS organizations, and Mayor Eric Garcetti, the 42nd Mayor of Los Angeles, today announced a new broadcast special called KCET PRESENTS: MAYOR GARCETTI’S CHECK-IN: YOUNG ANGELENOS providing an opportunity for the city’s youth to be in direct conversation with the Mayor about the coronavirus. PBS SoCal and KCET are collaborating with the Mayor’s office to produce the all-new special featuring Mayor Eric Garcetti along with Director of LA County Public Health Barbara Ferrer, who will host a virtual conversation moderated by KCET/PBS SoCal Chief Creative Officer Juan Devis. Fourteen students from schools across Los Angeles will participate via a Zoom conference, which will also include a sign language interpreter. Southern California viewers can tune in to the recorded virtual conversation on Weds., April 22 at 5 p.m. PT on PBS SoCal, Mayor Garcetti’s Facebook page FB.com/MayorOfLA, as well as go online at kcet.org/coronavirus.

The initiative is geared toward families across Los Angeles who are staying at home to comply with Mayor Garcetti’s and L.A. County’s “Safer at Home” orders to stop the spread of coronavirus – an initiative that has completely changed the lives of every young Angeleno. Mayor Garcetti and Dr. Ferrer will hear directly from young people across the city about how their lives have changed since the coronavirus, hear their concerns and answer questions about the future of the city and their safety. While Mayor Garcetti has been a proponent for young people to act with conviction, courage and vision, PBS SoCal and KCET have a shared mission to empower young people with every opportunity to expand their knowledge and contribute to their communities. The goal of the broadcast is to encourage engagement between the city, and its youth in order to best prepare for their future during this unprecedented time. The one-on-one interaction allows for the city leaders to listen to and embrace the concerns of their community directly as well as raise awareness around current public health policies and how to keep Angelenos safe.

Serving as a production model for KCET PRESENTS: MAYOR GARCETTI’S CHECK-IN: YOUNG ANGELENOS, a similar virtual initiative for KCET called “Reporter Roundup” was just launched a few weeks ago via a partnership with KPCC and LAist with the goal of keeping the local community updated on the latest in local news around COVID-19. Airing daily on KCET, the all-new, five-minute series features various local KPCC and LAist reporters gathered together on a daily Zoom call giving  people updates on the biggest headlines of the day. Viewers can tune in weeknights just before 9 pm PT on KCET as well as go online at kcet.org/coronavirus. A special 10-minute edition of “Reporter Roundup” will air on KCET following the Mayor Garcetti special featuring various education reporters from KPCC and LAist based on the conversation with the local youth.

Also, in response to coronavirus, Southern California’s PBS SoCal and KCET launched an “At-Home Learning” partnership just four weeks ago in collaboration with KQED in the San Francisco Bay Area to support the nation’s second largest school district, Los Angeles Unified School District (LAUSD), in providing continued learning for students. The initiative allowed for continued learning during normal school-day hours in light of school closures caused by COVID-19, regardless of broadband access. As of March 16, all 700,000 local Los Angeles Unified students, and now hundreds more districts outside of the city, have had free access to on-air and online educational programming with a specially curated weekday educational TV schedule and corresponding state standards curriculum-approved resources in collaboration with LAUSD (resources available at athomelearning.org). 100% of the PBS stations in California are now sharing the “At-Home Learning” programming and resources while nationally, over 80 stations in 30+ states are now utilizing programming and resources to develop their own local services for their communities.

Mayor Garcetti has already taken several emergency actions in the fight against the spread of COVID-19: a Safer at Home” emergency order requiring City of Los Angeles residents to remain in their homes except for the most essential activities — including critical tasks such as securing food and health, safety and medical necessities, as well as caring for children, elder adults, family, friends and people with disabilities; establishing access to free testing for all L.A. County residents who show symptoms; a plan to shelter thousands of Angelenos experiencing homelessness; restrictions placed on bars, nightclubs, restaurants, movie theaters, entertainment venues, bowling alleys and arcades, gyms and fitness centers, and Recreation and Parks facilities across L.A.; and limits on public gatherings in City facilities. The Mayor has also taken a number of steps to support residents and businesses during the local emergency — including placing a moratorium on residential and commercial evictions and water and power shutoffs and a halt to rent increases on rent-stabilized housing. He has relaxed parking and law enforcement for violations related to vehicle registration and driver’s license cards during the COVID-19 emergency period. More details and answers to frequently asked questions can be found at coronavirus.lacity.org.

For updates, follow @MayorOfLA, @PBSSoCal and @KCET on social media.

PBS SoCal is a donor-supported community institution that is a part of Public Media Group of Southern California, the flagship PBS station for 19 million diverse people across California formed by the merger of PBS SoCal and KCETLink Media Group.  PBS SoCal delivers content and experiences that inspire, inform and entertain – over the air, online, in the community and in the classroom. We offer the full slate of beloved PBS programs including MASTERPIECE, NOVA, PBS NewsHour, Frontline, Independent Lens, a broad library of documentary films including works from Ken Burns; and educational PBS KIDS programs including Daniel Tiger’s Neighborhood and Curious George. Our programs are accessible for free through four broadcast channels, and available for streaming at pbssocal.org, on the PBS mobile apps, and via connected TV services Android TV, Roku, Apple TV and Amazon Fire TV. 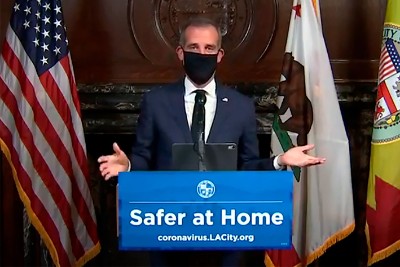 Eric Garcetti is a fourth-generation Angeleno and the 42nd Mayor of Los Angeles. Born and raised in the San Fernando Valley — the son of public servants and the grandson and great-grandson of immigrants from Mexico and Eastern Europe — Mayor Garcetti’s life has been shaped by a deep commitment to the core values of justice, dignity, and equality for all people.

These ideals have fueled the Mayor’s relentless drive to fulfill our common obligation: to give children and families of every race, faith, background, and income the chance to get a good education, live on safe streets, earn a decent wage, breathe clean air and drink clean water, receive affordable medical and child care, and build a future of their own choosing.

Angelenos are experiencing the remarkable results of his vision and leadership: the Mayor led and won a campaign to pass the boldest local infrastructure initiative in American history, funding a once-in-a-generation expansion of public transportation. He launched the L.A. College Promise, one of the most ambitious higher education access programs in the nation — serving more than 15,000 students, many of whom are overcoming poverty and are the first in their families to pursue the dream of higher education. He is confronting a homelessness crisis by leading an unprecedented regional alliance committed to getting people off the streets and ending chronic homelessness. And, in 2015, he put more money in workers’ pockets by raising the minimum wage to $15 an hour, and cut business taxes to help drive a historic economic recovery that has created a record number of jobs in legacy industries like entertainment and aerospace.

The Mayor’s government service began on the L.A. City Council, where he spent four terms as Council President before being elected Mayor in 2013 and winning re-election in 2017 by the widest margin in the history of Los Angeles.

Beyond his time at City Hall, Mayor Garcetti has served his country as an intelligence officer in the United States Navy Reserve, and taught at the University of Southern California and Occidental College.

The Mayor received his B.A. and M.A. from Columbia University, and studied as a Rhodes Scholar at Oxford University, and later at the London School of Economics. He is also a jazz pianist and photographer. 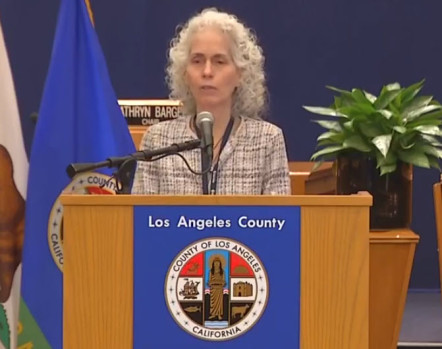 As the L.A. County Public Health Director, Dr. Barbara Ferrer is a nationally‐known public health leader with over 30 years of professional experience as a philanthropic strategist, public health director, educational leader, researcher, and community advocate. She has a proven track record of working collaboratively to improve population outcomes through efforts that build health and education equity.

Prior to working at the W.K. Kellogg Foundation, Dr. Ferrer served as the Executive Director of the Boston Public Health Commission, where she led a range of public health programs and built innovative partnerships to address inequities in health outcomes and support healthy communities and healthy families. During her time as Executive Director, Dr. Ferrer secured federal, state, and local funding for critical public health infrastructure and community‐based programs. Under her leadership, the City of Boston saw significant improvements in health outcomes, including a decrease in the rates of childhood obesity, smoking, and infant mortality.

Dr. Ferrer has also served as Director of Health Promotion & Chronic Disease Prevention and Director of the Division of the Maternal & Child Health at the Massachusetts Department of Public Health. As a headmaster at a district high school in Boston, she led efforts to significantly improve high school graduation rates and ensure that every graduating senior was accepted to college. Dr. Ferrer received her Ph.D. in Social Welfare from Brandeis University, a Master of Arts in Public Health from Boston University, a Master of Arts in Education from the University of Massachusetts, Boston, and a Bachelor of Arts in Community Studies from the University of California, Santa Cruz.