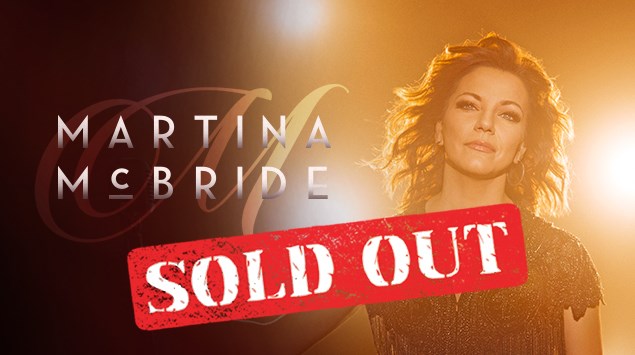 Martina McBride is an American country music singer-songwriter and record producer. She is known for her soprano singing range and country pop music.

Martina got her big break when Garth Brooks, for whom her husband worked on a sound crew, gave her an opening slot on his concert tour in 1990. She worked for Brooks selling souvenirs at his shows during her early days in Nashville.

Now she has her own merchandise table with not only T-shirts and CDs, but her book “Around the Table.”

Recipes and Inspiration for Gatherings Throughout the Year.

I am excited for my packet of 5 guitar picks with her name!

I really wanted the signed guitar but didn’t have an extra $250 dollars.

Martina entered the stage to a sold out crowd as her petite frame with sequin green pants, she noted were from Forever 21, just added to her sparkle.

“Loves The Only House” the show’s opener is a song about love and loving each other. She played the harmonica on this tune.

Martina took a few minutes to share about her number one job in life is being a Mom to her 3 beautiful daughters and being married for 30 years before she sang “In My Daughters Eyes.”

Look forward to a Christmas Album being released in October.

“Concrete Angel” and “Broken Wing” are two of my favorites, but the tears always flow down my face.

I know many people can relate to the lyrics. Martina’s music really speaks to people that have dealt with or dealing with PAIN in their lives. Myself, having a book “Unmasking the PAIN Within” and who also endured PAIN. I can relate to several of her songs, as being the Founder of P.A.I.N. Prevent Abuse in Neighborhoods.

Kenedee Rittenhouse is a young local upcoming artist that sings that song at our events. “Broken Wing” has touched many ladies lives that have gone through Domestic Violence and “Independence Day” is another one I am sure is relatable to many lives.

The crowd started singing along with “This Ones For the Girl”. Up beat and fun!!

“Reckless” released 2016 is very different from most of the Martina’s songs but the lyrics are strong!

Martina said “Each audience has a different feel. Tonight we feel the excitement!! We can’t wait to come back to Tulsa!!” She exits the stage.

Just as you think the concert is ending Martina enters back onto the stage with an encore “Son Of A Preacher Man” written by John Hurley and Ronnie Wilkins and first released by Dusty Springfield in 1968. Believe it or not, ending with a Journeys song “Don’t Stop Believing” this country girl rocked the stage and showed how versatile her music is.

Martina’s parents, Daryl and Jeanne Schiff, owned a dairy farm. Daryl, who was also a cabinetry shop owner, exposed Martina to country music at a young age. Listening to country music helped her acquire a love for singing. After school, she would spend hours singing along to the records of such popular artists as Reba McEntire, Linda Ronstadt, Juice Newton, Jeanne Pruett, Connie Smith, and Patsy Cline. Around the age of eight or nine, Martina began singing with a band her father fronted, “The Schiffters.” As Schiff grew older her role in the band progressively increased, from simply singing, to also playing keyboard with them. She enjoyed performing in her early years.

Martina began performing with a local rock band, The Penetrators, in Wichita instead.[8] Then, in 1987, Schiff gathered a group of musicians called Lotus and started looking for rehearsal space; she began renting space from studio engineer John McBride. In 1988, the two married.

After marrying, the couple moved to Nashville, Tennessee, in 1989 with the hope of beginning a career in country music. John McBride joined Garth Brooks’s sound crew and later became his concert production manager. Martina occasionally joined her husband on the road and helped sell Garth Brooks souvenirs. In 1990, impressed by Martina’s enthusiastic spirit, Brooks offered her the position of his opening act provided she could obtain a recording contract. During this time, while her husband was working with country artists Charlie Daniels and Ricky Van Shelton, he also helped produce her demo tape, which helped her gain a recording contract with RCA Nashville Records in 1991.

McBride signed to RCA Records in 1991, and made her debut the following year as a neo-traditionalist country singer with the single, “The Time Has Come”. Over time, she developed a pop-styled crossover sound, similar to that of Shania Twain and Faith Hill and has had a string of major hit singles on the Billboard country chart and occasionally on the adult contemporary chart. Five of these singles went to No. 1 on the country chart between 1995 and 2001, and one peaked at No. 1 on the adult contemporary chart in 2003. She has been called the “Celine Dion of Country Music” when she was recognized for her soprano singing range.

McBride has recorded a total of 13 studio albums, two greatest hits compilations, one “live” album, as well as two additional compilation albums. Eight of her studio albums and two of her compilations have received an RIAA Gold certification, or higher. In the U.S., she has sold over 14 million albums. In addition, McBride has won the Country Music Association’s “Female Vocalist of the Year” award four times (tied with Reba McEntire for the second-most wins) and the Academy of Country Music’s “Top Female Vocalist” award three times. She is also a 14-time Grammy Award nominee.

McBride works with a variety of charities. She has served as a spokeswoman for the National Domestic Violence Hotline as well as for the National Network to End Domestic Violence and national spokeswoman for the Tulsa Domestic Violence and Intervention Services. Every year since 1995, she has hosted Middle Tennessee‘s YWCA, “Celebrity Auction”, and it has raised nearly $400,000 so far. In 2004, she worked with “Kids Wish Network” to fulfill the wish of a young girl dying from muscular dystrophy.[38] McBride was awarded the “Minnie Pearl Humanitarian Award” in 2003.

McBride appeared on the Stand Up 2 Cancer Telethon in September 2010, where she performed “Unchained Melody” with Leona Lewis, Aaron Neville, and Stevie Wonder. Also in 2010, she hosted the YWCA for the 16th consecutive year, raising over 50,000 dollars. It totals over 500,000 dollars raised so far.

McBride also has a charity initiative called “Team Music is Love”. Speaking about Team Music Is Love, McBride stated “It started a few years ago as a group of fans that asked me if they could wear a T-shirt with my name to walk in a breast cancer walk, and I said ‘of course’ and it has grown from there. Last year, we decided we wanted to give it a better name, a name that sounded as important as it is, so we changed it to ‘Team Music is Love,’ since it’s about spreading love through music. We have done some amazing things over the past few years and we continue to grow and keep giving back.[Wikipedia]

About The Joint: Tulsa

The Joint: Tulsa is unlike any entertainment venue in the area. The 45,000-square-foot room offers amphitheater-style seating with excellent sightlines to watch top acts burn up the stage. Combine that with a state-of-the-art light and sound system within an intimate 2,700-seat setting, and you have a one-of-a-kind experience you’ll only find at Hard Rock Hotel & Casino Tulsa.

Ticket prices and information on upcoming shows are available online in The Joint section of www.hardrockcasinotulsa.com or by calling (918) 384-ROCK. The Joint box office is open from 10 a.m. – 6 p.m. Monday through Thursday and 10 a.m. – 9 p.m. on Friday and Saturday.