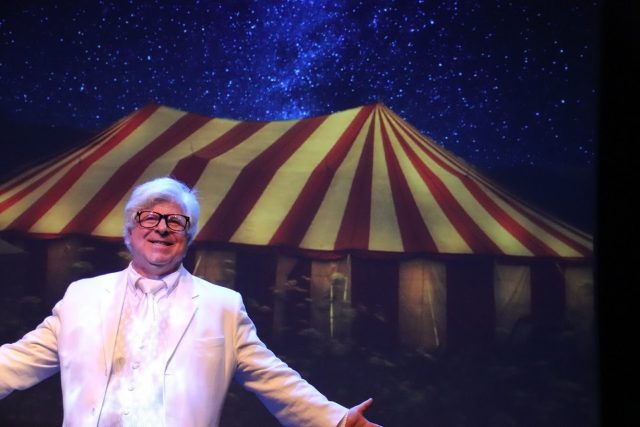 Los Angeles, CA (The Hollywood Times) 9/9/2018 – Director Jeff G. Rack packs a lot of visual and esthetic delight into Martians: An Evening with Ray Bradbury while taking his fans on a journey into Bradbury’s well known imagination. The world premiere of his collaborative effort with co-creator and actor, Charlie Mount is a delightful – if not at times – uneven ride as Mount’s Bradbury addresses the audience directly. The puppet master trick is not an easy one to weave through the tales told by other characters – but it works.

Based on Bradbury’s Martian short stories The Strawberry Window, the Blue Bottle, The Messiah and Night Call, Collect. Through Ray Bradbury we visit with character Bob and Carrie, a young couple struggling to turn the cold, dead Mars into an Earthly garden and Beck and Craig – two soldiers searching for the legendary Blue Bottle of Mars. Emil Barton is left as the last man on earth with only recordings of his younger self to drive him mad or keep him sane? The shapeshifting Martian in the form of Christ didn’t quite work into the overall feel of the almost precise words of Bradbury through his interviews and books.

Derrek McDaniel, lighting design, Gabriel Griego, projection design and Joseph “Sloe” Slawinski’s sound design along with the set design makes for a sensory fantastical ride through the acclaimed and revered writer who was widely regarded as the most important figure in the development of science fiction as a literary genre. Bradbury would say, “I’m not a scientist. I’m a writer of fairy tales and modern myths about technology.”

Rack and Mount have put forth an evening for kids and adults alike. If you don’t have kids the tall people surrounding you brought their childhoods with them with standing ovations.

CONSUMER ADVISORY: Suitable for family audiences, ages 8 to Adult. This is an inspiring and magical journey inside the mind of one of our greatest fantasy writers and futurists.