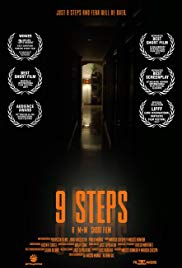 Los Angeles, CA (The Hollywood Times) 11/7/19–‘9 steps (9 Pasos)’ achieves international recognition after winning over 130 awards and being nominated for the Best Fiction Short Film Goya Award. The film focuses on a father teaching his young son a hard lesson on masculinity, leading to an unforeseeable result.

Co-directors Marisa Crespo and Moisés Romera’s speaks to The Hollywood Times about their suspenseful thriller and their careers.

Moisés Romera: Our most important films are SIRENITO (2004) it is a LGTB comedy with a transgressive script and ahead of its time. Saul, a 5-year-old boy, wants to disguise himself as a little mermaid and his mother begins to speculate on his sexual orientation. It won a dozen awards and was distributed at more than 200 festivals around the world. PAPÁS Y MAMÁS (2008) was a short film about gender violence and its influence on children. It is a very simple and shocking story of only three minutes that has been used and is used in hundreds of schools and institutions such as universities, ministries or publishers for its didactic value. Ten years later it is still being used. It won 36 awards and it was screened in more than 300 selections at festivals. A BETTER PLACE (2013) is a short film of social drama with a lot of ironies that talks about emigration, the economic crisis, education, but above all it talks about the prejudices of the audience. It won more than 70 international awards and was in more than 300 festivals around the world.

They can all be watched at www.mmfilmmakers.com

When did your love for film begin?

Moisés Romera: Since I was a child, I’ve always been passionate about cinema. I saw it on TV and every weekend in the old cinema in my village. Without money, without contacts and living in a small town, I thought it was impossible to make films. But we still had to try.

Tell us about A BETTER PLACE that has been used for years as didactic material in hundreds of talks, educational centers, and Universities and they are still screened today. Why do you think this film resonates with people?

Moisés Romera: A BETTER PLACE is a very small 3-minute short film that talks between the lines about many things: emigration, football and its evasive power, the economic crisis, also political corruption. But it manages to surprise and that the audience is reflected before its own prejudices. It is like a fresh slap in the cheek of the spectators. And that makes it work very well, especially in countries with strong immigration.

What should audiences expect from your films? Are there recurring themes?

Moisés Romera: Most of our films have a powerful twist at the end. It’s the brand of the house. We’ve done LGTB comedy, terror, social drama, even romantic comedy! But in all of them, we deal with subjects that interest us: education in families, how adults influence children, the lack of communication between people who love each other… We always try to turn the classics upside down and get something genuine.

Your new thriller “9 Steps” has won over 130 awards. Tell us about your film. Where did you get your inspiration from?

Moisés Romera: 9 STEPS is a short of “supposedly” terror that talks about education and young people. We did it as a sample for a feature film project and so far it has won 130 awards and more than 330 selections in festivals around the world. Almost everything we film, the inspiration lies in our fears and obsessions. Marisa always had panic in the dark as a child and we both had very rough parents who tried to teach something without any sensibility. Besides, we are concerned that these behaviors are inherited from parents to children.

What challenges did you face when filming?

Moisés Romera: The hardest part was finding the perfect child for the lead role. It took several months. The rest of the work was a piece of cake compared to casting. The second thing was to create a fresh script, very simple but universal. That it would serve as a showcase for the feature film, that it would be scary but would also show our interests as authors.

Share a few lessons to be learned from the film.

Moisés Romera: To the average viewer: Take care of your children’s education. It’s probably the most important job of your life. To young filmmakers: If you don’t have a budget, don’t try to make an expensive movie. Always focus on finding a good story and a small film that doesn’t need that budget.

What makes this film so powerful?

Moisés Romera: You should ask the audience. When we are with them in screening, we see that they empathize with the characters and connect with the story. A lot of people have told us that they remember the fears they had when they were kids.

When and where should we expect to see “9 Steps?”

Moisés Romera: It has been in festivals for almost two years and is still in demand in many countries on five continents. It can be seen wherever and whenever someone wants to screen it.

Marisa Crespo: Our most recent films are: 9 STEPS (2018) This short film accumulates, to date, more than 130 awards, 9 STEPS is not only a thriller also speaks about family, education even meta cinema with a touch of comedy. VALENTINA (2014) This short film it’s a romantic comedy starring two excellent actors and a lovely pug. It talks about encounters, misunderstandings, and love (human and animal). It won more than 30 awards.

When did your love for film begin?

Marisa Crespo: The truth is, I don’t remember the exact moment. I didn’t have a revelation when I saw a particular movie, but I’ve loved movies since I was a kid. When I was seven years old, I was already writing stories, which my younger brother and cousins “played”. At school I continued to write and direct my classmates in theatre classes and finally, in high school, I shot my first short film.

What should audiences expect from your films? Are there recurring themes?

Marisa Crespo: We try to surprise the audience and, above all, to get a thought. For this reason, almost all our works have a final twist that remains engraved in memory. Over time, we have discovered that there are several recurring themes, such as the lack of communication between people, problems within families, or the importance of education to improve society.

Your new thriller “9 Steps” has won over 130 awards. Tell us about your film.

Marisa Crespo: 9 Steps address several of our obsessions, such as parent-child relationships and the emotional inheritance that is passed down from generation to generation. In short, you reap what you sow. We did it as a sample for a feature film project that we are developing, also called 9 steps. In almost two years it has won more than 130 awards and continues to receive awards.

What challenges did you face when filming?

Marisa Crespo: In addition to finding a child who would fit Saul’s character and be able to play at the level we wanted, it was quite difficult to shoot in such a narrow corridor. We had to resort to a small team, but they are professionals accustomed to challenges and everything went well. We even enjoyed it!

Share a few lessons to be learned from the film.

For the audience: you sow what you reap.

Marisa Crespo: Of course, there are many more things that are learned from this film, and we are amazed at the ideas that appear in the minds of viewers when they come to talk to us at public screenings.