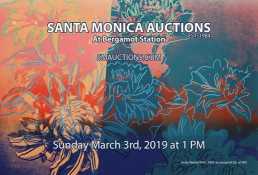 On Sunday, March 3rd, attend a special auction event to celebrate thirty-five years of the SANTA MONICA AUCTIONS. Owner and gallerist Robert Berman founded his first art gallery in 1979 on Main Street in Santa Monica. He saw the potential of a secondary art market and enabled the general public to access it. In 1984, SANTA MONICA AUCTIONS was established. It features modern and contemporary works along with mid-career and established artists working in all mediums including painting, photography, sculpture, drawing, etc.

This event will offer a glimpse behind the curtain into the business side of the art world. New collectors can learn just how easy it is to purchase an Andy Warhol, Joe Goode, or a David Hockney.

Well known works such as Robert Heinecken’s Recto/Verso Portfolio (1989), Keith Haring and William S. Burroughs The Valley (1989) and a rare sought after Roy Lichtenstein print (one of 300 hundred)…are just a few examples of works of art that can be purchased at this auction.

In addition to art by legendary artists, the March 3rd auction will include selected works from Berman’s recent San Francisco show entitled “VERY APPROPRIATE.” The word appropriation refers to the practice of artists using pre-existing objects or images in their art with little transformation of the original. “The most valuable artwork is a piece by Mike Bidlo who is known for appropriation and his most sought after appropriations were from the early 80s.” said Berman. “The piece we will be auctioning looks exactly like Jackson Pollock. It’s from 1983 that is one of the appropriations it’s valued at 150 to 200,000.”

Artist Gregg Gibbs has several appropriated works in the auction…such as the Brillo Boxes by Andy Warhol, Peace Christ (an interpretation of the famous Leonardo Da Vinci painting), The Son of Man by Belgian surrealist painter René Magritte.

Target Practice an homage to Target with Four Faces (1955) by Jasper Johns.

Venice artist Gary Palmer has created an appropriation of Banksy featuring the girl with the balloon that was shredded during a Christie’s auction. The artwork is called Up in Shreds, and it features the balloon with shreds protruding from the frame.

Each year, the auction attracts both longtime collectors along with new ones excited to start their own collection. Stop by the gallery to ask questions. Works can be seen now at the B-7 gallery at Bergamot Station (Tues-Fri 11-6pm) and will remain open until 8pm on Saturday, March 2nd, 2019. If you love art…this is an event not to be missed.

SANTA MONICA AUCTIONS will take place at the B-7 gallery space at Bergamot Station (2525 Michigan Avenue, Santa Monica) on Sunday March 3, 2019 at 1:00pm. Online and phone, along with live bidding (at the event) will be available. The catalog is continually updated. For more information about the SANTA MONICA AUCTIONS, email info@smauctions.com or give the gallery a call at (310) 315-1937. The public can view the full catalog on http://www.smauctions.com/