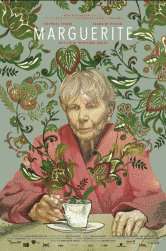 An aging woman and her nurse develop a friendship that inspires her to unearth unacknowledged longing and thus help her make peace with her past.

This film was a refreshing change from the other films I have reviewed this day. It harkens me back to when love was young and innocent but when you love someone and had to set them free due to your inability to speak out or due to society’s scorn, you were left with an emptiness that created a void in your heart, a longing for something more.

Marguerite is a film, in French, that touches your heart. Like the end of Two Strangers: Who meet five times, Marguerite (Béatrice Picard) is suffering from complications due to diabetes. She’s near her end of life. Rachel (Sandrine Bisson), her caregiver, is her only companion every day taking care of her needs, bathing her, helping her with her medications, and all the wonderful things that you do as a nurse. During the time, which seems like it passes several seasons, with one scene in the winter and another, the fall, and summer.

It’s when Rachel receives a call on her cell phone, Marguerite bends her ear to listen.  Marguerite asks if it’s her “boyfriend” and instead finds out it’s Rachel’s “girlfriend”. Marguerite says simply, “Oh!” Later on she reminisces looking at an old photo album. We see a woman, Marguerite is always with. Her “love”, Cecile.  Cecile, from the photos, and Marguerite were close friends in their past. Doing things together, on the beach, in central park, and other things that best friends do that is until Cecile married Andre. You can see Marguerite’s facial expression go from a smile and cheerful to that of sadness and rejection. She closes the album on her past life never knowing her true love.

She confides to Rachel that back then, being lesbian was frowned upon and a “mortal sin”.  She then asks Rachel, what it’s like to make love to a woman. Rachel pauses, smiles, and says, “C’est Beau…” or “It’s Beautiful.”  The act of making love to either sex should be and is a beautiful thing and you can see the look in Marguerite’s eyes that it is something she wished could’ve happened between her and Cecile but sadly, Cecile never knew of Marguerites love for her as she never told Cecile.  A love lost and now, because of Rachel, a love, remembered.

It’s the twilight of Marguerite’s life and Rachel tucks her in bed giving her a pill for the evening.  It’s no wonder why Marianne Farley’s beautiful romance and film has won as many awards as it has.  Being gay, straight, lesbian, bisexual or transgender doesn’t mean you don’t know how to love, it means you know how to love that much more.