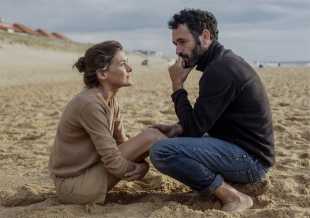 “While at home in her apartment with her own mother in Spain, a woman gets a phone call from her six-year-old son, who’s on holiday in France with his father. Every parent’s nightmare ensues”

Director Sorogoyen’s Mother (Madre) shares the story of a young boy who gets separated from his mother.  This intense tale has won numerous outstanding awards at festivals around the world, including the Goya Award for Best Fiction Short Film. The live action short stars one of Spain’s most popular actresses Marta Nieto. Mother (Madre) has been shortlisted for a 2019 Academy Award. His other film El Reino is nominated for 13 Goya Awards including Best Directing, Best Music, Best Cinematography, Best Picture and Best Actor in a supporting role, Best Actress in a supporting role and Best Production Design.

This film starts out with a panoramic view of a beach, early sunset, real time. The view pans from the east to the north and into the ocean just as the sun is starting to set… it’s twilight…

A mother and her ‘mother’ come home.  They converse about things unimportant but seemingly, “important.”  The younger mother is divorced, as the mention of an “ex” is stated.  The phone rings, it’s her son, Ivan. He states that he’s alone on a beach and that his father has gone somewhere, leaving little Ivan “alone.” First rule of parenting NEVER leave your children alone anywhere.  After a few questions, the mother begins going into a slight panic.  She starts asking him if they’re still in Spain or France.  Ivan says, France.

The mother starts to get more and more concerned. Her look, her emotions and her mother’s emotion of being totally helpless.  She passes the phone to her mother and tells her to speak to her grandson. The young mother, then takes her mother’s cell phone, runs to the bedroom, get’s a number of her husband’s ex-wife and through her panic mode, she conveys her fear.  She’ll call her back should she hear something.  The tension builds as you can feel what she’s going through. The phone her son’s on is dying.  It cuts off once and she heads into a tailspin.

This is a gripping film, in Spanish with English subtitles, which I didn’t mind at all. The tension I felt, as a father, I fear for my own son, whom I love dearly. My wife and I feel that way every time he and our grandson leave the house to go to school, not like this film but you parents reading this know exactly what I mean, right?

Our children our precious and they are our lives.  We cherish every moment with them. But to hear your child talking to you from a foreign country, alone on a beach with his parent nowhere to be found and a total stranger coming toward your child… well… there are no words to describe that feeling.  Rodrigo Sorogoyen took a situation and turned it into a film that rips our heartstrings out of us because we know anything can happen to anyone, anywhere.  I sat here watching this film without moving an inch, wondering what the hell was going to happen next and the questions in my mind were racing:

What happened to the father? Where was he? Where did he go? Why would any parent leave their child alone, on a beach, without a soul around and only sand? Did the father intend to…? I can’t continue because I’m getting the chills as I write this right now!  God bless our children, and thank you Rodrigo Sorogoyen for making this film and telling us what “could” happen, if…