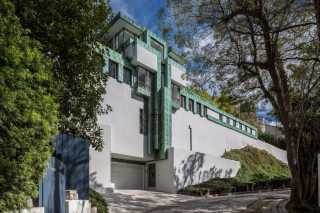 One of Hollywood’s most talented and popular actresses since the 1970s in The Godfather and Annie Hall and still a hit maker today in 2018’s Book Club, Diane Keaton has also made a name for herself in her role as a house flipper with a long resume of classic homes she has bought, remodeled and resold. One of Southern California’s most famous homes, originally designed by Frank Lloyd Wright’s son, that Keaton added her touch in the 1990s is for sale.

Keaton first starred in the home remodeling business as a Pinterest fan, fascinated with what she was seeing on the home-styling site and parlaying her ideas into a highly successful sideline renovation-restoration business with her houses selling almost before the certificate of occupancy is finalized. When she paired her own talent for detailed craftsmanship with what architect Lloyd Wright originally created, the results are both interesting and unique. Now on the market is the Mayan-themed Art Deco house, the Samuel-Novarro House (named after an early Hollywood silent-film actor Ramon Novarro and his business manager Louis Samuel), designed by Lloyd Wright in 1928 and lovingly restored and updated by Keaton, priced at $4.295 million.

With so many movie actors turning to flipping houses in their spare time, the Tinseltown standouts have been Ellen Degeneres (the forerunner) and multi-talented Keaton (a close second). With her scholastic understanding of architectural significance, her goal of enhancing rather than changing good architecture, with her hands-on management and her artistic eye for interior design, she has thrown herself wholeheartedly into reincarnating run-down older homes to their previous glory but with modern updates that will have them gliding seamlessly through future decades. Keaton recently published her third book on the subject, The House That Pinterest Built.

Located in the elite neighborhood of The Oaks in Los Feliz, California, Wright’s Samuel Novarro House has been attracting celebrity owners for years such as Leonard Bernstein, Jerome Robbins and Christina Ricci. Keaton was careful to retain Wright’s vision for the structure, highlighting his signature touches including interior accents and the oxidized copper trim on the exterior that were integral to the overall design which has been granted the California designation Historic-Cultural Monument #130.

In true California-Wright style, the interior has large open, light-filled spaces that bring the outdoors in through large, well-placed windows and glass walls. The main living area opens to the walled swimming pool terrace that invites skinny dipping in total privacy. Measuring approximately 2,690 square feet of interior space on four levels, the house offers three bedrooms and three baths, a large sunny kitchen with wide garden views, large great room and dining area, light-filled master suite and a master bath that has a dramatic Wright-designed accent wall. Many rooms open to terraces for dining, entertaining or for relaxing meditation, all overlooking mature professional landscaping of trees, ferns and overhanging vines. The home was remodeled again in 2008 by Justin Krzyston, who consulted with Keaton on the project and retained much of her work.