Pasadena, CA (The Hollywood Times) 2/18/18 – Who in our modern age is able to live Biblically?  David Koresh (featured in WACO)?  Sister Helen Prejean (featured in DEAD MAN WALKING)?  People like these probably occupy opposite poles of the spectrum.

“Now thou shalt turn it over to Patrick Walsh to say a few words, and then we’ll open the floor for questions,” Ballas joked.

Thanks to the camaraderie that quickly developed among the cast of LIVING BIBLICALLY, “this was starting to feel like a Season 3 show” by week two of Season 1, according to Walsh.  Perhaps Biblical consciousness actually caught on!

Are we meant to take the Bible literally or figuratively in the 21st century?  And what about hot-button issues like homosexuality?

Patrick Walsh said that homosexuality would be a Season 2 topic and that misogyny was well addressed in Episode 8 of Season 1.  Hate group beliefs of any kind using the Bible as support will not be reflected on this show.

Ian Gomez said that he had met a few priests in his life who were not “priestly.”  David Krumholtz said that his father had had a “soft spot” for Judaism and had tried to keep David very devout for some time.

Now that social media has opened up our world, it seems like there is always someone to offend in cyberspace.  Could this  Biblical comedy possibly rub certain people the wrong way?

“I don’t think there is any scenario where the show wouldn’t bother someone in the world,” said Patrick Walsh.  “But that is absolutely not the goal!”

Protagonist Chip Curry, like most of us, needs spiritual guidance that does not seem preachy.  Camryn Manhein thought that LIVING BIBLICALLY did a superb job of straddling both sides of the fence between believers and non-believers.

What are some of the biggest hurdles that we face in secular Western societies when we try to translate the rules of the Bible into our everyday life?  Perhaps the fear to have the conversation about it, as Johnny Galecki suggested.

It does seem strange that when 100 million Bibles are printed annually and 25% are bought in this country, we so rarely see anybody reading one!  Why not?

Are we afraid?  Ashamed?  Unwilling to be misunderstood and judged?  Perhaps a comedy like LIVING BIBLICALLY can break down some of these barriers by allowing us to laugh and open up a dialogue.

Commitment takes different forms for different people.  The structure and predictability of crash diets, for example, can help people stay on track over the longer term.

Of course, spiritual matters are rarely this simple–and the Bible itself seems full of contradictions.  So what remains for us mere mortals trying to follow the word of God to do?

Personal beliefs of course play a role.  The day to day example set by a “God Squad” of parents, teachers, and priests may speak louder than words–for better or worse! 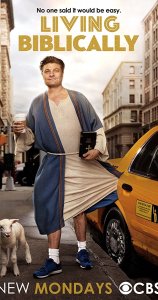 Chip Curry’s wife, Leslie, is a non-believer on LIVING BIBLICALLY.  Their intimate relationship leaves a great deal of room for discussion.  One of the characters on the show is a lesbian who, understandably, has a skeptical view of Biblical tenets such as “A woman’s place is in the home.”

“I’m learning so much!  I’m becoming a better person,” Lindsey Kraft was heard to say on theLIVING BIBLICALLY set.  Let us hope the series has a similar effect upon its viewers.

Biblical phrases like “false idols” can easily be applied to 21st-century scourges like cell phones that can seem like holy relics in certain hands.  Can we still play poker?  Probably the answer to that one is yes–as long as we don’t steal or kill!

The moral relativity of today’s political climate may make this show seem more timely than ever as we search for answers to civic questions of the utmost importance.  These are not merely personal matters, but affect the lives of everyone in the country.

Surprisingly, all four networks wanted LIVING BIBLICALLY from the very first.  The producers were amazed by how little interference there was on the stories and overall subject matter.

In the role of Chip Curry, Jay Ferguson is credited with bringing a religious fervor to the making of the show.  Chip’s personal shaman has him feeding the poor and taking in abandoned animals–which is not such a bad thing, after all.

Having immediate test feedback from the live studio audience for LIVING BIBLICALLY has been very helpful to gauge whether the more controversial material is crossing the line.  It will be interesting to see how it all plays in the upcoming ratings!  Watch for LIVING BIBLICALLY later this month if you, too, are searching for some answers.