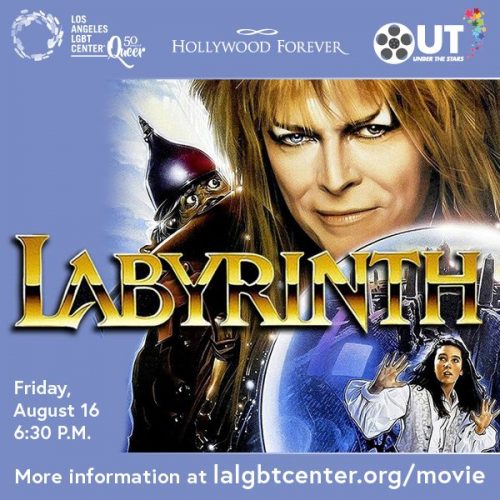 LOS ANGELES, August 1, 2019—Held at the iconic Hollywood Forever, the Los Angeles LGBT Center’s OUT Under the Stars summer outdoor film series returns on Friday, August 16, with a showing of Jim Henson’s 1986 musical fantasy Labyrinth, starring David Bowie, Jennifer Connelly, and The Muppets, among others.

A young girl Sarah (Connelly) enters a world of her own creation and experiences her first awareness of love and danger after wishing her younger brother away to the Goblin King (Bowie). Sarah has only 13 hours to reach the center of a fantastical labyrinth or surrender to the Goblin King forever!

“I know I’m not the only one who had my queer spirit awakened, and somewhat terrified, by David Bowie’s magic-dancing Goblin King. And I was always transfixed by Jennifer Connelly’s realization that she’s not spellbound after all. I’ve loved these two my entire life,” said Rani DeMesme-Anders, staff liaison for Center membership and the Los Angeles Women’s Network. “Long live Muppets, mazes, masquerades, and the power of the babe!”

Ticket holders of the VIP Package for Two (2) will receive early entry to the venue at 6 p.m.; one complimentary drive-on parking pass; reserved premier seating; a picnic package which includes snacks; and access to the hosted Tito’s Handmade Vodka cocktail bar.

All proceeds benefit the Center’s work to build a world in which LGBT people thrive as healthy, equal, and complete members of society.

“Labyrinth thematically complements the Center’s mission—simply put, things don’t change on their own. You have to fight for what is just and right,” said Kimberly Fisher, staff liaison for Center membership and the Center’s Young Professionals Council. “Jennifer Connelly’s strength and determination to boldly challenge authority inverts traditional structures of fairytales, thereby providing the feminist storyline we all crave.”

Tickets for the event are currently on sale at lalgbtcenter.org/movie.

OUT Under the Stars sponsors: Executive Producer is Hollywood Forever; Director is U.S. Bank; Producer is Tito’s Handmade Vodka; Associate Producers are Angel City Brewery and TOMS; Media Sponsors are The Fight Magazine and iHeart Media.

$25 General Admission includes entry to the event at 6:30 p.m.
Tickets may be purchased online at lalgbtcenter.org/movie.
Advocates, LAWN and YPC members giving $25 or more a month receive complimentary early admission to the screening. To learn more and join the Los Angeles Women’s Network, visit lalgbtcenter.org/lawn or lalgbtcenter.org/ypc
for the Young Professionals Council.

About the Los Angeles LGBT Center

Celebrating its 50th anniversary in 2019, the Los Angeles LGBT Center has cared for, championed, and celebrated LGBT individuals and families in Los Angeles and beyond since 1969. Today the Center’s nearly 700 employees provide services for more LGBT people than any other organization in the world, offering programs, services, and global advocacy that span four broad categories: Health, Social Services and Housing, Culture and Education, Leadership and Advocacy. We are an unstoppable force in the fight against bigotry and the struggle to build a better world; a world in which LGBT people thrive as healthy, equal, and complete members of society. Learn more at lalgbtcenter.org.