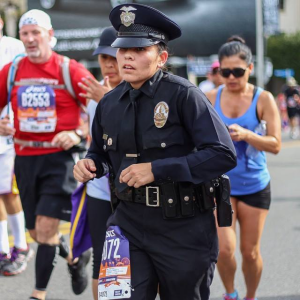 HOLLYWOOD (March 16, 2017) This Sunday, March 19th, LAPD officers Jesse Rubalcava and Marty Pacheco will be running the LA Marathon with a team of Hollywood PAL’s kids and cadets. They will be joining over 24,000 other runners for the 26.2 mile race beginning at 7:30am at Dodgers stadium, winding through Los Angeles and ending at Santa Monica Pier. Hollywood PAL will be hosting a fueling station mid-course outside of their martial arts studio located at 6411 Hollywood Boulevard where they will be serving water and oranges to all the athletes.

For the past 8 months, these dedicated youth and their officers have been running together three times each week. They have also been competing in various 5k’s 10k’s, 15k’s and half marathons to prepare themselves both physically and mentally for this challenge. The Los Angeles Marathon is the fourth largest marathon in the U.S. and the 10th largest worldwide.

“It’s become a truly life-changing experience” reflects Officer Pacheco on the outcomes of participating in the program. “I’m so proud of how our kids have helped motivate each other to keep going, I know they will do great on Sunday!”

In final preparation for the big day, Sunday, Hard Rock Café, Hollywood is hosting the team’s carb-loading dinner on Friday night.  Eating carbohydrates prior to a race critically improves endurance, speed, energy and alertness. For marathon runners, it helps to stock up on the carbs so they can make it to the finish line.

Cynthia, a PAL Hollywood Alumni and returning LA Marathon runner, committed to training again this year to support her younger sibling, Andrea, who is running the marathon for the first time.  “My sister has always been shy and afraid to try new things. I convinced her to try running. In the past few months, I have seen her overcome her fears and not give up when things get hard. I am so excited to see her cross the finish line on marathon day because I have no doubt that she will finish strong!”

About the Hollywood Police Activities League

The Hollywood Police Activities League (Hollywood PAL), a community-based crime prevention program, provides young people with positive alternatives to gangs and drugs. Through interaction with police officers in recreational, educational, athletic and fine arts activities, young people are given the opportunity to form healthy, positive attitudes toward the police, the society and the laws they represent. Hollywood PAL serves more than 500 at-risk youth, ages 6-17, annually from Hollywood and surrounding areas of Los Angeles, offering after-school programs six days per week throughout the year. www.hollywoodpal.org