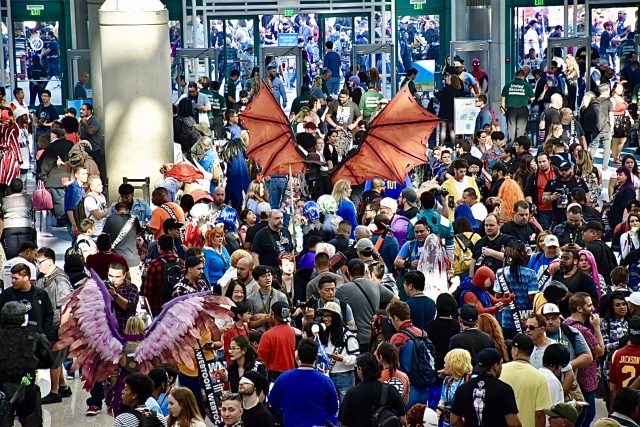 It was a visual smorgasbord where you were able to go back, again and again, to feast on all that Comic-Con has to offer.

We now take you on a visual journey of LA Comic Con 2019.

Day One: 10:11:19 / 1:00 p.m. to 8:00 p.m.
Outside of the entrance doors, underneath the enormous Comic-Con banner, which was strategically placed across the face of the building, we came face to face with Thor, a few Spider-men and a Spider-Woman, who looked as though she wasn’t really ready for all of the attention about to be lavished upon her from those seeking to get as many photos as possible.

When attendees and cosplayers arrived at the convention center, they were greeted and serenaded with an unspoken sense of anticipation for what they believed awaited them inside.

No extremely long lines, mobs or unruly individuals clogging the doorways waiting impatiently to get in? What? Isn’t this COMIC CON?

The lack of hordes of event-goers causes one to wonder if they are at the right event. Where are all the flamboyantly, over the top dressed individuals seen in the advertisements promoting the three day-long convention? Hmm?

Inside. Awe, yes, there they are- those who came well prepared and ready to pose, and pose and pose for a picture.

A pretty sweet transformation, Bumblebee is ready for action. The female cosplayer’s husband created this outfit for her in six months. Instagram connection: @him_and_i_cosplayers

And just as our cameras are lowered and about to come to rest at our sides, another familiar/interesting character catches our eye and the excitement begins to build again and again.

This just maybe what we were expecting the LA Comic Con event to be, exciting, entertaining and fun.

Perhaps the mild-mannered first day was due to it being a weekday, Friday, but a weekday none the less. The weekend, Saturday and Sunday offer another opportunity to mix and mingle with a fresh grouping of Cosplayers. Looking forward to a bigger and brighter, strangely familiar two more days.

Upstairs in the exhibition hall, the room was filled with exhibitors and artists displaying and selling their work.

Yes, comic con may cause you to think this convention is for comic book lovers only. Comic-Con no longer caters to only those who like to get together with like-minded individuals who share their passion for comics and science fiction. Not at all. Now fans of the movies, television shows, toys and comic books all come together in one place.

Comic books are for sale but there is a lot more to comic con. Vendors onsite sell buttons, pins, t-shirts, posters, and more. Artists had the opportunity to exhibit their work for eager buyers to purchase.

THT talked with four artists about their art and the length of time it takes to create a piece.

THT: “How did you get started as an artist and tell us about your style of art.”

Artist Jared Barel: “The way I do my artwork for my comics and graphic novels is what we call, “live-action.”

“We shoot everything like a film but with digital photography. You get actors in scenarios and props, and things sort of posed and through a fusion of digital and traditional illustration- …computer generation or big photo manipulation or whatever other digital side and (along with) my hand drawing element, whether it’s ink on paper or drawing directly on screen with a tablet, you get a fusion of elements to get a very lifelike cinematic look to the work.

So for all my art prints and stuff, sort of applying that technique to some of your favorite movie and television characters to give it like a cool comic book look and a hand-drawn feeling to characters you know from the big screen.”


Mike Matola: “I handwrite out full movie scripts and albums to create portraits of the people.

“So I handwrite out the full scripts to Jurassic Park, Indiana Jones, Princess Bride- all handwritten out to make the portraits. It takes anywhere from eight to ten working hours to six months, depending on the piece.”

THT: How did you get started?”

Matola: Laughs and says, “I needed a birthday gift for a friend of mine. (pauses) How does anything get started, right? It’s all handwritten.”

Artist Kai Parker: “I’ve been drawing since I could hold a pencil.”

“I wanted to do this and I use to do art galleries and things when I was a teenager but I had to move out pretty early…and I met this lady (his wife) and we started having kids and stuff and (I) stopped to raise my family. A few years ago I got a little more free time in life and I started drawing again.”

THT: “How do you create your work?”

Parker: “I start with hand drawing always and then I usually scan it. I switched to digital a year and a half ago because I didn’t like the way people who drew pictures, and when they photographed it, it didn’t have the same quality. I taught myself to draw digitally and I finish (my drawings) digitally. Instead of using ink, I ink it on an iPad.”

Artist Savo: “I got started in art, um, I was a bad kid so I was grounded all of the time.”

“My mom would make us read and I talked her into letting me have my comic books and I started tracing them and that’s how it started.”

THT: “How long does it take you to do one piece?”

Friday may have been mild-mannered but Saturday was filled with an enormous amount of fans and Comic-Con participants all excited to enjoy the day with friends and family. Lines were out the convention center doors and overflowing onto the sidewalk all around the LA Convention Center. What a sight!

This is what makes Comic Con, COMIC CON!

Mr. Iglesias was on the main stage and this was one of the hottest panels. Attendance was standing room only. Fans crowded the area from the rail lining the stage all the way to the walkway causing a major traffic jam in the aisles.

The last day of the LA Comic Con event was not as overflowing with attendees as Saturday but the day did bring out a larger crowd than on Friday. A male fan commented, with a big smile, that it was his first time at Comic-Con and that it was a lot of fun. He also stated, “This brings back childhood memories for me.”

Main Floor and Outside photo gallery

Another year of great cosplay action comes to an end.

Until we see you next year, Live Long and Prosper.