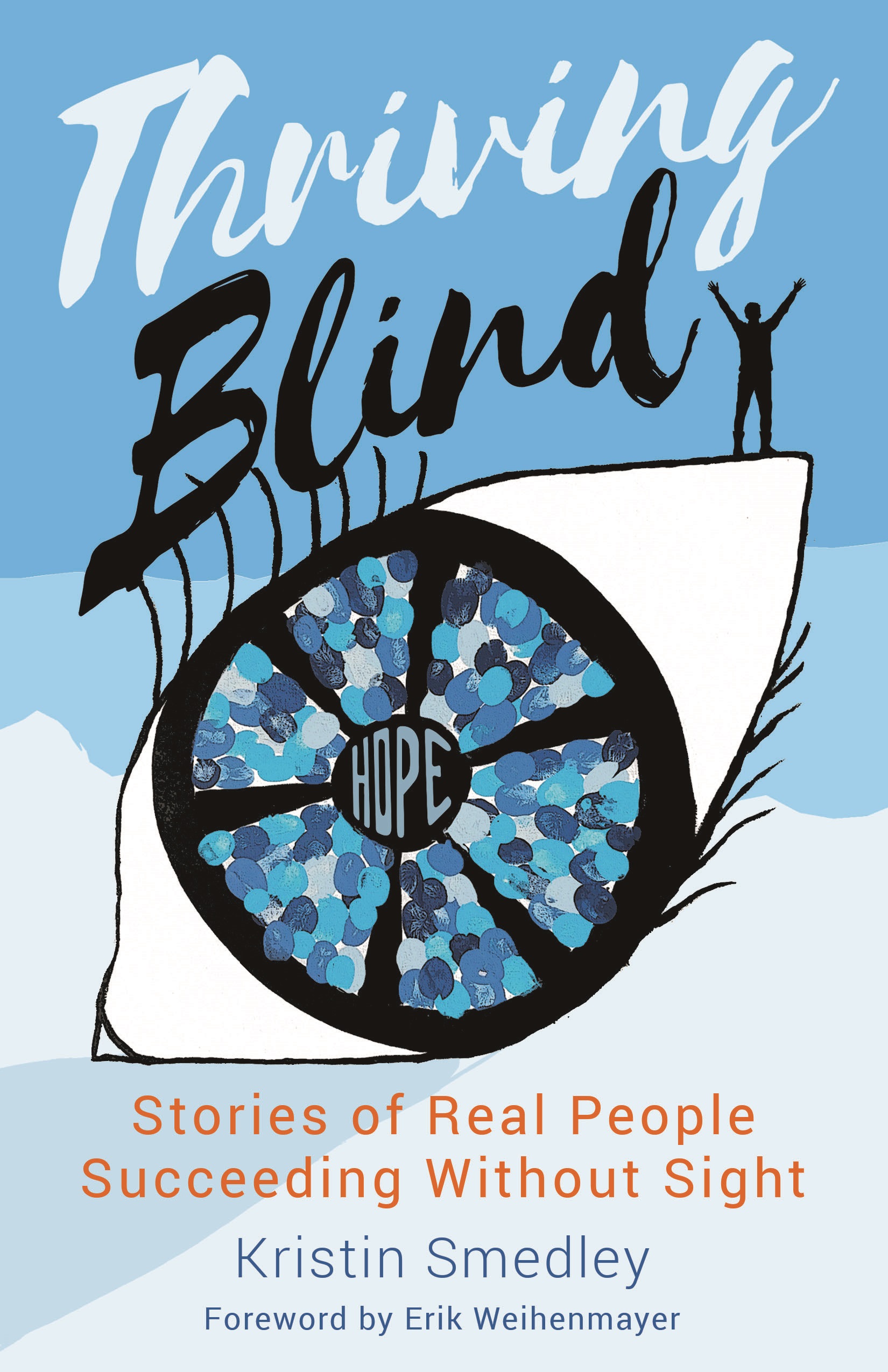 What lessons have you learned?

The greatest of the many lessons I have learned is that it is crucial that parents take their own dreams for their children off of them. Let the kids have their own dreams. I now say: Get them the tools they need and then follow their lead. 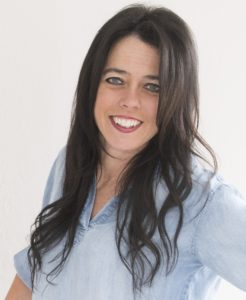 Three years after your son Michael was diagnosed as being legally blind, you were sucker punched to your heart. Tell us about this time.

Three years later my second baby was diagnosed at 4 months old with the same blindness (CRB1-LCA). My oldest blind son, Michael, changed my perception of blindness right before Mitch was born. He showed me every day that blindness did not bother him. He was the role model for me for succeeding without sight that I never had before he was born.

Your first book is called Thriving Blind: Stories of Real People Succeeding Without Sight. Can you share a story from your book?

All of the stories in the book are extraordinary because they remind me every time I read them of just how ordinary blind people are. Auto mechanic, architect, teacher, CEO, etc. However, they do things in an extraordinary – outside the box – way a lot of times. I was especially proud and honored that Erik Weihenmeyer, the first blind man to reach the top of the highest mountains on all 7 continents and ESPY award winner, wrote the forward for the book. Erik’s book, Touch the Top of the World was the first turning point in my journey. He went from being a teen that was pissed off about going blind and fighting against the tools like braille and the white cane, to advocating for and celebrating the tools of blindness and achieving successes sighted people haven’t even done. My son Michael and I met Erik when Michael was just 6 years old, and I believe that meeting changed the trajectory of Michael’s life.

What is a misnomer of children who are blind?

People think children that are blind cannot learn, or play sports, or even enjoy life in general. Both of my blind sons have won baseball championships on sighted teams, and that’s just one of the many ordinary and extraordinary things that’s a part of our journey. However, back in Kindergarten, the school expected Michael to achieve at a 70% max. They thought he would not be able to hang up his coat, learn as well as the sighted kids, or even walk home from the bus stop independently. However, because of tools like Braille, accessible technology, and the white cane, Michael grew confidently and independently into a high achieving social butterfly. He graduated in the top 10% of his class of 600 kids and was the Commencement Speaker. He now goes to a large college, Penn State, with two majors and two minors, and has made the Dean’s List with a 4.0 every semester.

Also, he is a recording artist, baseball championship winner, and award-winning speaker. And Mitchell is following in his footsteps as he achieves high honor roll and was recently at TEAM USA headquarters in Colorado Springs as he was identified as a top blind athlete and possible future para Olympian.

Your children are accomplished athletes, high-achieving students, and talented musicians. What do you want the world to know about them?

They are hilarious fun! They can make just about anything fun. They have a unique way of looking at the world and they just enjoy life and people. Michael and Mitchell and their (sighted) sister Karissa have unique gifts and talents. I actually believe my blind sons are at an advantage over other kids their age and that will carry into their adult lives. They have used their brains differently than sighted people. They are using parts of their brains that the rest of us ignore. As my Michael says, they are able to focus their listening and critical thinking skills while sighted people are distracted by vision. Michael and Mitchell can read people much better that sighted people can. They listen and can hear sincerity and authenticity. And they can also hear the opposite! They have been coordinating their educational teams for years, and have been communicating with teachers, coaches, and friends their whole lives. People are often impressed with my sons’ interpersonal skills and comfortable demeanors.

You recently received one of the highest honors in the rare disease community: The Champion of Hope Award. What did this mean to you and your family?

Hopelessness nearly killed me, and I decided to take on the missions I have embraced because I do not want any other Mom to feel that deep dark pit of hopelessness that I did. And to have my peers and colleagues and high achieving people in this field recognize me as the Champion of Hope is extraordinary. There are hundreds of people like me that are moving mountains for their children and patients and people. To be amongst the biggest champions in my space is just incredible. And if I am being completely honest, it was quite a bit of validation as well. I had a man in my field embarrass me publicly early on and say I would never make a dent in this field – I had no idea what I was doing, he joked. I also had a former colleague embarrass me to our team saying that I needed “Genetics for Dummies” because he thought I was stupid when it came to coordinating research. I even had someone that was close to me for a long time recently say I should give this up and get a real job because I would never “make it” doing what I do. I don’t look for validation nor do I spend any energy on people that don’t matter – but it sure was great to prove them wrong!!!!

I was part of an Advisory Group that gave input to Spark Therapeutics on how to serve the inherited retinal disease community while they were developing a treatment for one of the 260 genetic blindness conditions. Spark is a fantastic example of how pharmaceuticals and patient organizations can work together to improve lives. The partnership really brought the IRD community together – which culminated in lots of us attending the FDA Advisory Committee meeting to present Luxturna, a first ever gene therapy to treat blindness. I was one of 12 people in the world invited to testify on behalf of Luxrturna. On Dec 23, 2017, 2 days before Christmas, the FDA approved Luxturna to treat LCA-RPE65 childhood blindnesss!

Tell us about the Curing Retinal Blindness Foundation.

I co-Founded the Curing Retinal Blindness Foundation in 2011 with a group of Moms that I found on Facebook. All of our children have CRB1 LCA/RP. The CRBF began as a little fundraising machine with 10 families in the USA all working to fund basic research toward a gene therapy to treat CRB1. Now, our mission is to fund research and connect affected families to resources for living, and thriving, with blindness. Today we have families all over the world communicating, sharing resources, and raising funds for multiple research projects. We fund research in the US, Germany, Netherlands, and more. We recently partnered with Sanford University to start a CRB1 patient registry and are launching family meet up days in the US beginning with Cleveland in May.

We have raised nearly $1.4 million, established a National Rare Eye Disease Awareness Day in Congress (legislation that was the first in US history to be submitted in Braille) and have taken this very rare eye disease from never heard of to being discussed in many places worldwide.

I recently added a new focus to my work: educating the public on blindness, and more importantly, thriving with blindness. Perceptions of blindness is that those that are blind lead devastating, isolating lives…and that is not the case. The problem with the misconceptions is that they are causing a 70% unemployment rate in the blind community, a 30% poverty rate, and horrific high school and college graduation rates.

Those that are NOT thriving blind likely had parents whose perception was that of devastation, etc.. therefore a proper education and connections to resources we not sought. Not everyone has the tenacity and relentless grit that a few of us have been blessed with to move the mountains that are in the way. It’s an honor for me to use my talents because quite a few people did that for me on my journey.

Another big goal of mine is to find a way to either reduce the cost of printed braille or subsidize it on a massive scale to make it widely available, especially to young blind readers. Right now my 140 page paperback Thriving Blind is sold on Amazon for 19.95. That same book in printed Braille would cost $120. That has to change.

I want people to think of me, to see my face, to know my story, and know that if I could get back up after the sucker punches life has hit me with…anyone can. Resilience is a skill that I believe is ignited by role models. I want people, starting with my children, to see me and know that you can get back up, surround yourself with good people, flex your faith muscles, and come back better and stronger. We all have a very unique purpose we are here to fulfill, and I honestly believe getting knocked down gets us closer to the heart of that purpose. It helps us shed what was in our way.

Looking at life that way is the reason I can smile every day and come out of every challenge brilliant, not broken.