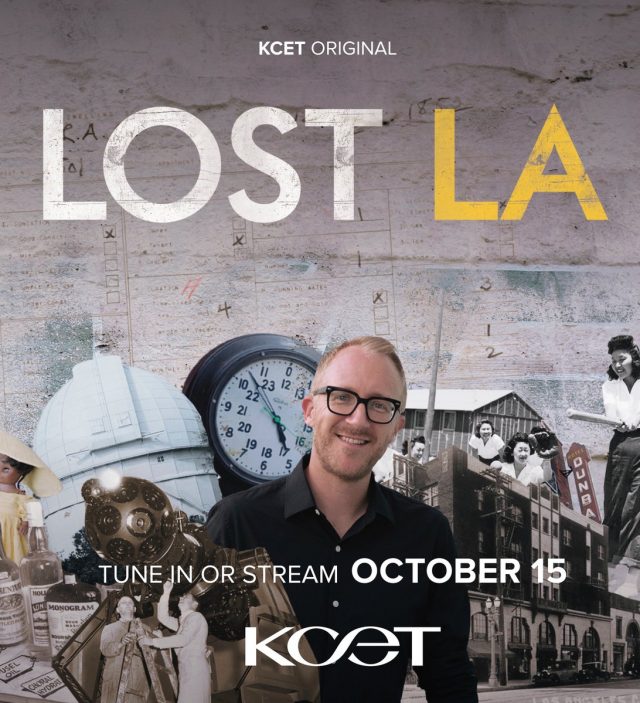 Los Angeles, California (The Hollywood Times) 10/11/2019 – “We are trying to uncover that lost stories from the past. The stories that people have either forgotten or buried for whatever reason and tell them again.” Nathan Masters, writer, host and producer of LOST LA, an Emmy® Award-winning public television series from KCET and the USC Libraries told The Hollywood Times during a telephone conversation.

Now in its fourth season, LOST LA explores our region’s hidden past through documents, photos and other rare artifacts from California libraries and archives. Season four of LOST LA premieres on Tues., Oct. 15 at 8:30 p.m. on KCET in Southern California with encores airing one week later on PBS SoCal at 7:30 p.m.

Following the broadcast, each episode will stream at kcet.org/lostla and on the free PBS Video app (available on Roku, Apple TV, Amazon Fire TV, the App Store and Google Play), as well as on YouTube and Amazon Prime.

If you have not had the pleasure to watch LOST LA on KCET, you need too! This is truly an amazing show to watch with the whole family, especially the kids. There is a great deal of history and cool facts in each and every episode. Season one featured Wild L.A. and the extinction of California Grizzly Bears, reshaping LA and Before The Dodgers. Season Two featured the Wild West, Yosemite, Desert Fantasy, Dream Factory, Beach Culture, Ghost Towns and of course Fantasyland from Walt Disney’s Disneyland Park to amazing creative places to eat throughout Los Angeles. What better entertainment to experience with the kids, do an extra credit report for the kids to turn into the teacher! Season four sounds like it is going to be the most informative season yet. So don’t forget to tune in on Tuesday, October 15 to learn about Griffith Park.

LOST LA originally premiered as a series on KCET in January of 2016 based on an “online to on-air” incubation model where high-trafficked web content was produced for broadcast. Since then, the series has continued to challenge the assumption that Los Angeles is a city without a history. Instead, LOST LA offers a history of Southern California that is not often told, or has been forgotten, bringing primary sources of Los Angeles history to the screen and connecting them to the Los Angeles of today.

The episodes will be telecast as follows (subject to change):

Explore one of the nation’s largest municipal parks and discover how it hasn’t always lived up to its founder’s vision of a public recreation ground for all.

One of ten camps where Japanese Americans were incarcerated during WWII, California’s Manzanar was photographed by outsiders Dorothea Lange and Ansel Adams—and by incarceree Tōyō Miyatake, who captured scenes from within.

Explore the subterranean myths of Prohibition-era Los Angeles, crawl through bootlegger tunnels and visit some of the city’s oldest speakeasies.

Pioneering African-American architect Paul Revere Williams contributed to some of the city’s most recognizable civic structures—all while confronting racial barriers.

Visit the underground vault of the Carnegie Observatories and the historic Mount Wilson Observatory, once the world capital of astronomy.

THT: From one of the clips I saw, do you have a sewing machine now?

Nathan Masters: (Laughter!) “I am still working on that, but I do know how to sew. In our Shindana episode, which is about a south LA toy company that specialized in black dolls and going into that episode, I did not know how to sew. I had a really good teacher, Tuesday Connor as you will see in the show and that was definitely one of the best moments in the production.”

THT: Tell us about the Griffith Park episode:

Nathan Masters: “That is our season premiere and everybody knows Griffith Park, but I don’t think everyone knows the history that we are telling in this episode. For instance, there was an incident on Memorial Day in 1961, which is a big part of the episode, there was a sort of melee/civil rights protest, that really brought into focus the idea that Griffith Park should be for everyone, which is an idea that the park’s founder Griffith J. Griffith established when he donated the land to the city in 1896. It was a time when African America park goers stood up for their rights to be in the park. Everyone knows the merry-go-round, but not many people know the story about that protest.”

Nathan Masters: “That one was a lot of fun to make. They were all fun, but in this one I got to go underground and explore an abandoned speakeasies in downtown LA. During prohibition the consumption of intoxicated liquors was technically illegal. As everybody knows, liquor didn’t stop following, so how did Angelino’s keep their glasses half full during that time. One of the ways they did it, was to go to speakeasies. The episode looks at how the speakeasies worked and looked at the distribution networks that provided these speakeasies the liquor. It really explores this longstanding myths that there was the extensive tunnel network that connected all the speakeasies, from the coast where rum runners would unload their wares, we tried to get to the bottom of that and see if there were any truth to that story about the tunnels.”

THT: Which of these episodes touched you the most?

Nathan Masters: “It really was the story of the Shindana Toy Company. I will be honest, I had not heard of this story before we went into it. Shindana is part of a bigger organization called ‘Operation Bootstrap.’ It was set up during the wake of the 1965 Watts uprising in South Los Angeles. It was dedicated to building up community empowerment. In the wake of the riots, there was a lot of disinvestment in the community, a lot of businesses moved out and so the whole idea behind Operation Bootstrap is, we are going to find capital and bring it in and help the community build up its own businesses. One of those was this toy company. I have not heard about that story and it is a fascinating story and I am really honored that we are able to tell it.”

“Shindana Toy Company manufactured the toys there and farmed out the manufacturing of the dresses to families like the Connors, who I meet in the episode, but it all took place in South LA. To keep the business know how, job related skills and manufacturing skills to the people in the community and there is a lasting legacy today. A lot of local business owners can really trace their continued success to Operation Bootstrap.”

THT: How cool was it shooting the Discovering The Universe episode?

Nathan Masters: “That was the one I was most excited going into the season. This is a story about a scientific discovery that took place here in Southern California. I don’t think too many Southern Californians know about. One of the most important scientific discoveries of the 20th Century. It was Edwin Hubbell, and everyone knows the name Hubbell, from the Hubbell Space Telescope. Hubbell was also an astronomer, who worked in Pasadena and up on Mount Wilson. Before he made his big discovery in 1923, most of the world thought that there was no universe beyond the Milky Way. The Milky Way was the extent of the cosmos and what he did was prove that the Andromeda Nebula, which is what they called it at the time, was actually the Andromeda Galaxy and there are billions of galaxies out there.”

“He said the Earth really wasn’t at the center of the universe and that there really is a lot of universe out there. That all happened in Pasadena!”

“We recently started a Curriculum Project, we partnered with some people at the new UCLA history geography project and we have created lesson plans that tailor to the state wide curriculum standard that are getting these stories in K-12 classrooms. So we are actually sharing these stories, not only with our television viewers, but also with students.”

Earlier this summer, KCET and the USC Libraries announced the launch of an all-new, statewide K-12 initiative called Lost LA Curriculum Project consisting of lesson plans based on episodes of the show from previous seasons. Currently available to teachers across the state on a portal that can be accessed through kcet.org/lostlacurriculum, teachers and students have been able to navigate digital content pertinent to topics that range from Los Angeles’ coded geographies to the city’s original roots in “The Wild West.” Lost LA Curriculum Project was created by a powerful local alliance comprised of KCET, USC Libraries, the UCLA History-Geography Project and the Huntington-USC Institute on California and the West.

LOST LA is supported by The Ralph M. Parsons Foundation, the California Library and other generous institutional funders.

For more information about LOST LA and to watch episodes online, visit kcet.org/LostLA.

ABOUT USC LIBRARIES AND L.A. AS SUBJECT

The USC Libraries actively support the discovery, creation, and preservation of knowledge at the University of Southern California and beyond.

The libraries serve as host institution for L.A. As Subject, an association of more than 230 libraries, cultural institutions, official archives, and private collectors dedicated to preserving and telling the sometimes-hidden histories of the Los Angeles region. Southern California history is among the USC Libraries’ prominent collections and programming strengths, and Lost LA is an emblem of USC’s connection and commitment to Los Angeles as a Pacific Rim megacity.

Nathan Masters is a writer who hosts and produces Lost L.A., an Emmy Award-winning public television series from KCET and the USC Libraries. The show explores how rare artifacts from Southern California’s archives can unlock hidden and often-surprising stories from the region’s past. Nathan’s writing has appeared in many publications, including Los Angeles Magazine and the Los Angeles Times. He also helps manage public programs and media initiatives at the USC Libraries, home to the L.A. as Subject research consortium. Visit his website at nathanmasters.me.