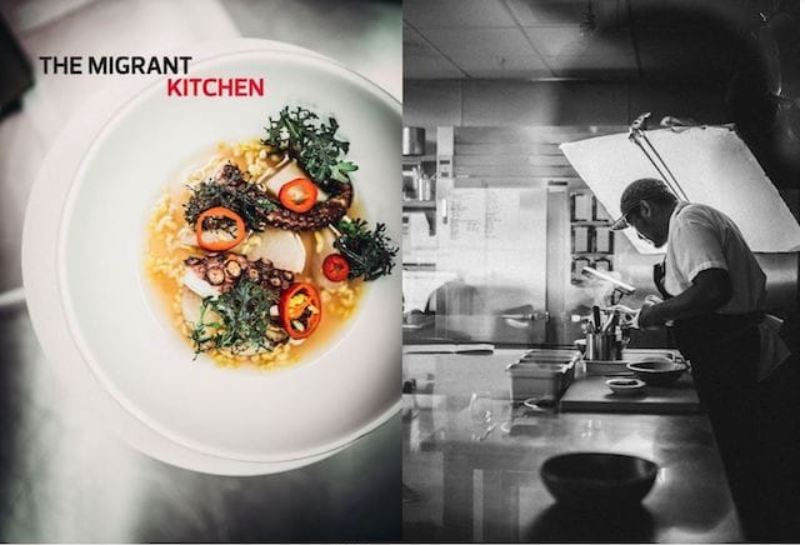 Los Angeles, California (The Hollywood Times) 11/7/2017 – “We are coming down to the last few weeks of post-production. Sound design, color and usually working up to the very last moment so that we can sent off the final cut to be released.” Antonio Diaz, Founder/Executive Producer – Life & Thyme told The Hollywood Times during a telephone interview.

On KCET in Southern California THE MIGRANT KITCHEN premieres Wed., Nov. 8 at 8 p.m. followed by MEALS READY TO EAT at 8:30 p.m.

New Season Explores How the Next Generation of Chefs Is Creating Cuisine Inspired by the Immigrant Experience.

Watch a preview of The Migrant Kitchen, our Emmy®-winning food series that explores Los Angeles’ booming food scene through the eyes of a new generation of chefs whose cuisine is inspired by the immigrant experience. Produced in partnership with culinary publication Life & Thyme, The Migrant Kitchen‘s second season will premiere on Nov. 8 at 8 p.m. PT on KCET in Southern California and at 9 p.m. ET/PT on Link TV nationwide (DirectTV 375 and DISH Network 9410).  https://www.kcet.org/shows/the-migrant-kitchen/the-migrant-kitchen-season-2-trailer

THE MIGRANT KITCHEN, produced in partnership with acclaimed culinary publication Life & Thyme, dedicated to documenting global food culture. THE MIGRANT KITCHEN explores Los Angeles’ booming food scene through the eyes of a new generation of chefs whose cuisine is inspired by the immigrant experience.

The second season of the James Beard Award and Webby-nominated series, continues to spotlight chefs who are combining traditional, ethnic cuisines with new flavors and fresh technique that have transformed the culinary landscape of the city, making it one of the food capitals of the world.

The interview with Antonio Diaz:

The Hollywood Times (THT): Although this is your second season, how did the show first come about?

Antonio Diaz (AD): Late 2015, KCET and Juan Devis, Chief Creative Officer at KCET reached out to me and said they wanted to develop a new show around food and I love your work at Life & Thyme, so let’s chat and see if we can come up with something. We had an idea for documenting the immigrant experience of Los Angeles through the lens of food. A lot of it has to do with food and we wanted to tell the story of what immigrants contributed to society, specifically in LA and really highlight the fact that the food industry, the restaurant industry, the backbone of this whole industry are immigrants.

Season one did really well last year. It got us a James Beard nomination and won us an Emmy® and pushed us to do season 2 which was really exciting.

THT: Who came up with the title “The Migrant Kitchen?”

AD: It was actually Juan. He is great coming up with titles for each of the episodes. We had to come up with the name and we had about a hundred of them and mostly bad ones and Juan pitched to us “The Migrant Kitchen” and that fit perfectly and rolled off the tongue very well. It does capture what the show is about.

THT: Where do you find these great migrant chefs and their stories?

AD: I run a company called Life & Thyme which is a digital publication and a print publication at one point, and thus month we turn five years old! We have been documenting culinary stories all around the world, focusing on fool culture, the chefs, on social issues around food and obviously our home base of LA. In LA, we really built a solid connection within the industry, the gatekeepers of the restaurants, the publicists and PR company, contributors and creators that document the stories.

Who are the people that have not been spoken too, like a dishwasher. We are constantly chatting with the chefs, cooks and the coffee roasters. This is our business and we talk about it every day and through those connections, it has been a lot easier for us to find stories, we know where to start. We can call these Chefs and ask them if they are interested in being part of the show.

THT: What can we look forward to in Season 2?

AD: Season 2 is a little different from Season 1. Season 2 is the next generation of immigrant chefs. We are tackling Mexican, Vietnamese, Japanese and Indian food this season. We are not necessarily capturing the traditional cuisine that you would find in the Motherland. We want to see what the younger generation of chefs that were raised in Los Angeles and grew up with the food, either through their family or growing up with it. They went to culinary school and were training under the best French chefs. They are starting these business restaurants, not for survival reasons, which is a lot of reason why immigrants start restaurants because that is what they cook at home and that is what they know coming from their countries.

These other chefs do it because of their passion, it’s what they want to do. They want to highlight the flavors they grew up with but to put a different spin on it. They want to make it more creative. A taco doesn’t have to be one dollar, cheap food, why can’t it be as sophisticated as French food or Italian food. This is the difference between this season and last season. To really focus on these young chefs that are trying to change their stereotypes of their food and culture.

THT: Do you have an all-time favorite food?

AD: I am bias because I come from a Mexican background, and my parents are Mexican immigrants, so I can’t live without tortillas or tacos. For me Mexican food you can do anything with it and it’s so complex and so varied that I am a little bias, it’s my favorite. It is also one of the episodes that I directed.

AD: I do, but I have less time to really spend time in my own kitchen. If I do, it’s a one pan situation and what is fast!

THT: In your opinion, do you believe there will come a day when we no longer have “printed” media?

AD: Unfortunately, I think it will come to that one day. In the last couple of years, like a bubble, an intense interest in these high-end, indie-style coffee table/publication books. They were released every quarter or bi-annually and people loved it. This was the case in the last few years, I feel like it will start to disappear and it might have been a thing, but there will always be those true fans that they love the romance of print, and I am one of them, smell the paper, feel it, but it is an enormous finally expense to getting running it and sustain it. Digital content is far easier to produce and much more inexpensive to produce. You can pump it out immediately, where you document a story and it will take months to get it out.

THT: Do you plan to have a book one day?

AD: That is something I have thought about. There could be an anthology or collection of recipes from all these chefs we have had the pleasure documenting. Cookbooks I see a little different than publications. Cookbooks are only getting stronger and coming out and everyone’s grandmas is coming out with one. They are timeless. There might be a Life & Thyme cookbook in the future. I love print and the printed magazine was only a phase for us that we had to kind of do to understand and be a validated publication, but I think maybe in the future there might be another iteration of it, some sort of cookbook or anthology book or something a little bit more timeless and long-lasting.

THE MIGRANT KITCHEN will telecast as follows (subject to change):

A collective of culturally connected, distinguished chefs (including Ray Garcia of Broken Spanish, Wes Avila of Guerilla Tacos, Carlos Salgado of Taco Maria, as well as Jorge Gaviria of corn purveyor, Masienda) work to preserve heritage and push forward the “Alta California” Mexican food movement. By celebrating those dishes and ingredients integral to Mexico’s cuisine and its economy, a group of accomplished Mexican-American chefs are working to elevate not only the food, but what people of their heritage can achieve in the food business. Featured in the episode: Guerilla Tacos, Orange County’s Taco Maria, Broken Spanish, BS Taqueria.

Indian food has often been associated with stiff restaurants, all-you-can-eat buffets and heavily spiced, cream-based dishes. The Mahendro family (Anu, Pawan, Nakul and Arjun) immigrated to Los Angeles and found that they didn’t recognize any of the so-called Indian food available to them.

Like carefully selected spices to a classic Indian dish, each family member contributes something special and significant to their restaurant Badmaash and to the city of LA. Featured in the episode: Downtown LA’s Badmaash.

Charles Namba and Courtney Kaplan, the couple behind Echo Park’s Tsubaki, have always loved the culture of izakaya but found Los Angeles lacking in these Japanese taverns. Sonoko Sakai is a teacher with a passion for buckwheat and the near-sacred art of soba noodles, and Seiichi Yokota knows how to prepare and preserve fresh fish with a traditional Japanese technique never seen before in Los Angeles.  Each aims to introduce Angelenos to the unique spirit of Japanese hospitality and the culture’s deep culinary customs.

Banh Mi. Spring rolls. Pho. The war and its subsequent refugees. These are things most commonly associated with the Vietnamese culture and its people. But a group of chefs in Los Angeles (including Cassia’s Bryant Ng and Kim Luu-Ng, Diep Tran of Good Girl Dinette, and Minh Phan of Porridge & Puffs) are hoping to demonstrate that there’s so much more than that.

Creative Director and entrepreneur, Antonio Diaz, began his career in the interactive and graphic design field focused on creating products and stories in the digital space for the past 10 years.  He has founded creative agencies, led the art and technical direction of tech startups, produced/directed several short films, and founded Life & Thyme, a culinary media company, in 2012.  Based out of Los Angeles, Antonio is focused on building relationships and partnerships to offer meaningful experiences in video, photography, and publishing by merging creativity and storytelling with food and culture.

KCETLink Media Group is a national independent, nonprofit, digital and broadcast network that provides high-quality, culturally diverse programming designed to engage the public in innovative, entertaining and transformative ways. With a commitment to independent perspectives, smart global entertainment, local communities, and opportunities for engagement and social action, KCETLink depicts people and the world through a lens unavailable elsewhere in U.S. media. A viewer-supported 501(c)(3) organization, KCETLink content is distributed nationally via satellite on Link TV DIRECTV channel 375 and DISH Network channel 9410 and on KCET in Southern and Central California via broadcast and cable, as well as through various digital delivery systems. For additional information about KCET and Link TV productions, web-exclusive content, programming schedules and community events, please visit kcet.org or linktv.org. Select programming from KCET and Link TV is also available for streaming on Amazon, Apple TV and Roku platforms.