Torrance, CA (The Hollywood Times) 9/27/17 – Kate Hudson is nothing short of a Hollywood royalty.  The Oscar-nominated daughter of legendary actress Goldie Hawn is the very definition of a princess; she steps lightly and holds her fingers delicately.  Her face falls naturally into a perfectly impish smile for the camera each time a fan stands next to her with anticipation for a photo.  She was, quite literally, born for this.

Hudson, with a freshly cropped and widely talked-about hairdo, a wide-brimmed hat, and a fabulous duster and jeans, swept out onto the floor of her Fabletics store at Del Amo Fashion Center in Torrance and let the cameras have at her.  Black curtains veiled her from the deep line of fans waiting to meet her outside the store’s entrance.  A brunette female deejay waited to spin what would ultimately become an irresistibly poppy selection of 80’s and 90’s tunes behind the glass. Kate herself would ultimately jam to these tunes between signing autographs and downing pineapple appetizers.

But for the moment, the tone was hushed.  Kate had a moment to talk about her cause with multiple media before turning her attention to bedazzled fans.  Topics included body image, womanhood, the activewear line, and of course, breast cancer.

“Partnering with CFDA is amazing, because we’re really a fashion brand meets athletic wear and obviously something like breast cancer that affects all of us in some capacity is something that we should just continue to see progress made,” she said.

Fans were invited to her flagship activewear store “shop for a cause.”  20% of the net proceeds were earmarked for the CFDA’s Fashion Target’s Breast Cancer Initiative.  Hudson spent the hours between 6:00 and 8:00 P.M. getting to know Fabletics shoppers, autographing shopping totes with her signature spunky heart, and taking individual photos with them.  Among the favorites were the slew of baby and toddler photos, which Hudson especially revelled in.

Pink champagne, raspberry lemonade, and appetizers were served.  Shoppers and Fabletics employees enjoyed their time with Hudson, and she clearly is at ease mingling with them; at one point she expressed concern that “that boy wanted a lobster roll.”  At another, she gasped in mock horror when a guest’s sunglasses clattered to the floor.  She’s a delightful, gracious, and surprisingly grounded personality.  So it’s not at all a surprise to see her harnessing her gravitas for a greater cause. 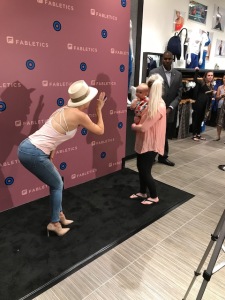 Learn more about Fashion Targets Breast Cancer at www.CFDA.com, or shop for Fabletics at www.fabletics.com

5 Different Ways To Add Soyabean In Your Kids Diet