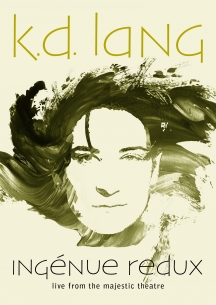 Coming to DVD, Blu-ray, and Digital Formats via MVD on December 14th

Lush and subtle, “Ingénue” allowed lang and co-writer-producer Ben Mink to explore jazz, cabaret and Tin Pan Alley songwriting, resulting in some of her greatest compositions. This Landmarks Live in Concert special features an uninterrupted performance of the complete “Ingénue”album, including lang’s GRAMMY® Award-winning hit “Constant Craving,” “Save Me,” “Wash Me Clean,” “Season of Hollow Soul” and “Miss Chatelaine.” The concert also includes the beloved Leonard Cohen song “Hallelujah” and a previously unreleased song by lang and Joe Pisapia, “Sleeping Alone.” The special also features an interview with lang by James Reed, an entertainment editor at Los Angeles Times.

Twenty-six years ago, k.d. lang was embraced by the music world, its elders (including collaborators such as Tony Bennett and Roy Orbison) and audiences all over the globe for her powerfully emotional voice and often quirky take on country music.

“‘Ingénue’ was a change in vernacular and vocabulary in that it was personal-finding some romantic space,” said k.d. lang. “It was time. It was me. I had gotten to a time and point where I wanted to be me.”

“Working with k.d. to create such a personal and special piece is one of the highlights of my career,” said Landmarks Live in Concert director and executive producer Daniel E Catullo III. “This show is special in so many ways and I was honored to be able to work with k.d. to translate this show onto TV.”

Song List:
“Save Me”
“The Mind of Love”
“Miss Chatelaine”
“Wash Me Clean”
“So It Shall Be”
“Still Thrives This Love”
“Season of Hollow Soul” (full video below)

The concert will be available to stream the following day via PBS Passport (contact your local PBS station for details) at pbs.org/gperf and PBS apps.PBS Passport is a special benefit for PBS supporters to access an on-demand library of over 1,000 hours of quality public television programming. Viewer contributions are an important source of funding, making PBS programs possible. PBS and public television stations offer all Americans from every walk of life the opportunity to explore new ideas and new worlds through television and online programming. Contact your local PBS station for details on PBS Passport.

Great Performances is produced by THIRTEEN Productions LLC for WNET, one of America’s most prolific and respected public media providers. Throughout its more than 40-year history on PBS, Great Performances has provided viewers across the country with an unparalleled showcase of the best in all genres of the performing arts, serving as America’s most prestigious and enduring broadcaster of cultural programming.