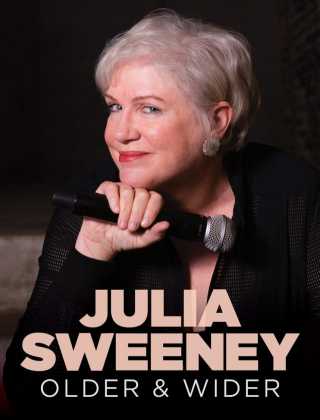 Limited Engagement at The Geffen

Westwood, CA (The Hollywood Times) 2/9/19 – Julia Sweeney brought her latest creation – Older and Wider – a stand-up one-woman show (aka comedic monologuing) to the Geffen through February 17th.  In Older and Wider this comic/actor/author bounded out onto the bare stage with only a mic and stool that held water and tea to announce she had to cancel last night’s show because she had laryngitis. Sweeney went into vivid detail of how long it took, how panicked she felt by the treks to a doctor then to an Urgent Care to finally get a steroid shot so that she could get her voice back to perform her show for us. Then, after a sip of tea – she dove in.

The 90-minute show covers politics, sex, cancer – Sweeney is a cervical cancer survivor – marriage, religion, her mother, her Jewish husband and why they took the 23AndMe DNA Ancestry test… which proved that she was right, she does have Neanderthal ancestry – spoiler alert. Sweeney took ten years off from Hollywood and moved to suburban Chicago with her 2nd husband and daughter before moving back to… let me back up… Much of her show centers around her adopted “immigrant” daughter, from China, named Mulan. No… she didn’t name her after a Disney princess but she’ll explain why she often says she did when you see her show… Because she has resumed her career and life here in LA with her husband, while Mulan – (who she tried to name Tara) – now is off to college!

Sweeney’s already in a Saturday Night Live family reunion show with Lorne Michaels’ Shrill  on Hulu as SNL alumna Julia Sweeney co-stars opposite current SNL cast member Aidy Bryant – playing her mother – in the six-episode single-camera comedy series about a fat young woman who wants to change her life but not her body.

This Irish ex-Catholic atheist is a whirling dervish with her observational comedy yet as much as I wanted to love Older and Wider because Julia Sweeney is adorable, lovable and just plain witty as hell – but the show didn’t pack the punch she’s clearly capable of. The show was either really funny or at times she went “off script” and would find her way back to the story being told. Sweeney is known for workshopping material and changing things as she goes – perhaps this was a night that happened but regardless the show could use a good 15-20 minute cut to showcase Sweeney as the unique performer that she is.

Maybe the last election is just hammered on so much that relief was needed within the tales. Yet, the story of how the family found out that their daughter’s boyfriend voted for Trump lead to a very long drawn-out pay-off that didn’t quite spin with her usual clever witticisms. This is a remarkable woman – who created and is most recognized for the androgynous character “Pat”-from SNL that she tells a hilarious story about when Mulan found out her mother was famous it was for a performing a person (“Pat”) who no one knew if he was a she or she was a he or was “Pat” even aware? – Long before Transamerica (brilliant Indie film) or Bruce Jenner became Caitlin or even before Shorty & Morty hit the short film circuit.

Sweeney has said she prefers writing but thinks she’s a better performer. That’s a tough call. She has a story about her mother’s way of telling a story that clearly highlights how Julia got her take on life by making the unbearable… hilarious as often as she can.

It’s a difficult time for comics – let alone the rest of us – to be free in this PC world while some try to keep the words “authentic” or “transparent” are tossed about… as Sacha Baron Cohen’s Austrian Brüno would dismissively say while swishing straight into camera, “That’s sooo 2015”… eye rolls. “Pat” is as relevant today and he/she/he was in the 90’s, maybe more-so now.

Her fans, and I am one, stand by this secular humanist who happens to be an atheist that goes to church. Don’t ask… go see.