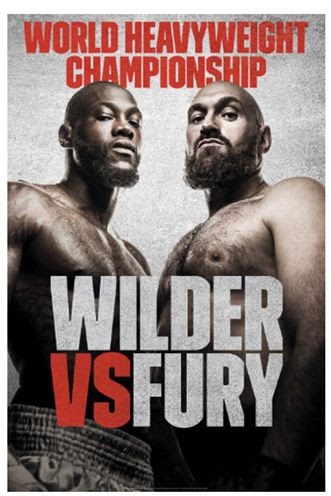 Los Angeles, CA (The Hollywood Times) 12/03/18 – Judges called a controversial draw between an evenly matched showdown on Saturday night – that pitted two of boxing’s greatest heavyweight showmen and undefeated champions for the heavyweight title. Fury – the Gypsy King  and Wilder – the Bronze Bomber put on an exhilerating boxing match in what has been hailed as the most significant heavyweight fight in the US since Lennox Lewis vs. Mike Tyson in 2002.

WBC Heavyweight World Champion 6-foot-7 Deontay Wilder (40–0, 39 KOs) against lineal 6-foot-9 champion Tyson Fury (27-0, 19 KOs) had the final scores at no win-no loss. CBS Sports scored it 115-111 for Fury Judge Alejandro Rochin, of Mexico, scored the fight 115-111 for Wilder, Canadian judge Robert Tapper had it 114-112 for Fury, and British judge Phil Edwards had it 113-113 as both fighters remained unbeaten. ESPN.com scored it 114-112 for Wilder, who retained his belt for the eighth time. Fury retained the lineal championship in his first defense.

The claim that the fight was so good they decided they should do it again left the larger question if the indecision was a moneymaking and marketing ploy. These two would’ve been destined to fight again no matter the outcome. Deontay Wilder dropped Tyson Fury twice, but Fury also out-boxed him for most of the fight. The raucous fans at Staples Center weren’t happy with the rematch clause or the crowd at AMC Citywalk Universal, where it screened live.

The fight played out exactly in favor of each fighter’s strengths as Fury controlled by boxing with constant feints and awkward angles while Wilder picked his spots to land heavy counter punches which almost ended the fight in the final round. Wilder had boasted he would KO Fury in the 7th round but Fury showed the same kind of heart and will that helped him overcome the past three years since he won three major titles and the lineal championship three years ago this week in a monumental upset of Klitschko, the longtime champion.

He also represented personal bringing social awareness in his comeback from addiction, mental illness and despair – it made him a sight to behold. The two boxers gave fans a memorable and tension-filled fight.

Professional boxer and boxing promoter Floyd Mayweather was interviewed at the end of the fifth round and with his assessment he backed Fury. He said: “Wilder is dependent on just one shot – he’s looking for one big shot – and as a fighter, you have to use other weapons.

“Fury has the combinations, and a very, very fast jab and is taking his time so it’s looks like, if Wilder doesn’t do anything else, Fury’s going to win if it goes the distance.” That didn’t happen and Mayweather walked out with apparent disgust after the decision was announced.

Wilder admittedly said, “I was rushing my punches. That’s something I usually don’t do. I couldn’t let it go tonight. I was forcing my punches too much instead of sitting back, being patient and waiting it. I really wanted to get him out of there, give the fans what they want to see.”

While Fury countered with, “We’re on away soil. I got knocked down twice, but I still believe I won that fight. I’m being a total professional here. I went to Germany to fight [Wladimir] Klitschko, and I went to America to fight Deontay Wilder. God bless America. The ‘Gypsy King’ has returned.

That man (Wilder) is a fearsome puncher, and I was able to avoid that. The world knows I won the fight.”

Both fighters want a rematch, Wilder mentioned it was about the money while Fury wanted to take time to be with family and regroup.

Ray Nutt, Fathom Events CEO said, “The fight world has been waiting for an epic heavyweight battle like this for more than 10 years. We are proud to partner with Showtime to give fight fans the opportunity to view, right from their local cinemas.”

Legendary boxing coach, Freddie Roach was seen in Fury’s corner. It would’ve been nice to hear what he had to say.