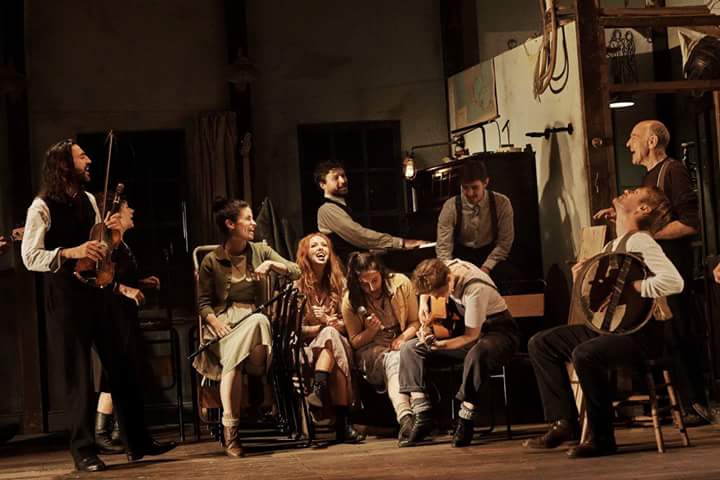 Jimmy’s Hall is a new stage adaptation of the critically acclaimed Ken Loach film. It tells the true story of Leitrim farmer Jimmy Gralton, the only Irishman deported from his own country. His crime was to build a dance hall where he encouraged the local community to learn, to argue and to dream, but above all to dance and have fun.  As the hall grew in popularity its free-spirited reputation brought it to the attention of the church and politicians who forced Jimmy to flee and the hall to close.

A decade later, at the height of the Depression, Jimmy returns from the US. The hall stands abandoned but as Jimmy sees the poverty and growing oppression in the village, the leader and activist within him is stirred. He decides to reopen the hall, and so takes on the established authorities of the church and the government.

The production marks Director of the Abbey Theatre Graham McLaren’s directorial debut at the theatre. Graham has been co-Director of the Abbey, along with Neil Murray, since September 2016. Graham’s productions of European classics have been seen in London’s West End, ancient Greek amphitheatres, black box studios and on the main stages of national theatres and major festivals across the world.

Graham McLaren said ‘It was important to me that this would be the first play I’d direct at the Abbey Theatre. Jimmy Gralton had a vision of Ireland as a fair and equal society, with people’s needs put in front of profit, at the heart of its culture. He wanted to create a space for people to come and break bread, to sing the old songs, to fall in love, argue about politics and to be a community. This act was such a threat to the people in power, that they vilified Jimmy. They burned down the hall and he was deported.

It is a great honour to play a part in telling Jimmy’s story. Our production is a celebration of his ideals – full of live music, singing and dancing. This is a story about the people of Leitrim, told for the people of Leitrim. As Ireland’s national theatre it is imperative for us, that they are the first to see it.’

Jimmy’s Hall opened in Carrick-on-Shannon Community School on 22 July ahead of a three week run on the Abbey Stage. Booking is now open for all dates at abbeytheatre.ie. //ENDS
Lucky Leitrim had the World premiere of Jimmy’s Hall in school hall in Leitrim. Very fitting location for the only Irish man officially deported from Ireland who just wanted a community hall for people to enjoy.

From 20 to 22 July 2017, the Abbey Theatre presented the world premiere of Jimmy’s Hall in Carrick-On-Shannon in Leitrim

Inspired by the revolutionary ideals of its founders and its rich canon of Irish dramatic writing, the Abbey Theatre’s Mission is to imaginatively engage with all of Irish society through the production of ambitious, courageous and new theatre in all its forms. The Abbey Theatre commits to lead in the telling of the whole Irish story, in English and in Irish, and affirms that it is a theatre for the entire island of Ireland and for all its people. In every endeavour, the Abbey Theatre promotes inclusiveness, diversity and equality.

The Abbey Theatre gratefully acknowledges the support of