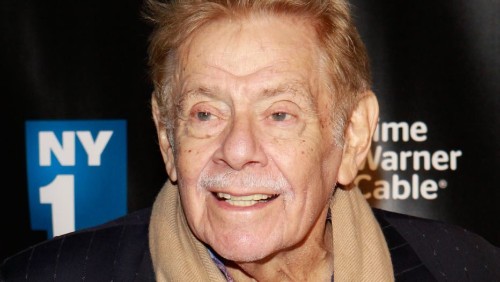 His death was announced on Twitter by his son, the actor Ben Stiller, who did not specify the cause.

Stiller wasn’t cast as his signature character until his late 60s, decades after he had found success as half of the comedy duo, Stiller and Meara, with his real-life wife, Anne Meara.

If Stiller and Meara made him famous, “Seinfeld” made him beloved.

Born on June 8, 1927, in Brooklyn, New York, there was little to indicate the son of a bus driver would eventually rise to national recognition. After serving in the military in Europe in World War II, he graduated with a degree in speech and drama from Syracuse University in 1950 and embarked on an acting career.

Three years later, Stiller caught his big break — in the office of a casting director. That’s where he met Meara, then a struggling actress looking for work and apparently a new set of cutlery for her apartment.

The obvious chemistry between the tall Irish-Catholic Meara and the short, Jewish Stiller translated first to the stage — they joined the predecessor to Chicago’s Second City comedy troupe in the mid 1950s and eventually became a popular nightclub act in New York City — and later on screen. Stiller and Meara became regulars on “The Ed Sullivan Show,” appearing more than 30 times from 1963 to 1971, according to IMDB.

Their popularity waned in the ’70s along with the variety show format, however, and by the end of the decade they were relegated to co-hosting HBO’s “Sneak Preview” segments, plugging upcoming shows and movies on the then-fledgling cable channel. Though Stiller continued to work, he wouldn’t find as much success again — until 1993.

That’s when he debuted on “Seinfeld” on NBC as Frank Constanza, the father of one of the show’s main characters, George Constanza (played by Jason Alexander). But at first, the veteran character actor was unimpressed by the role as it was written — a meek man dominated by his on-screen wife, played by Estelle Harris.

Just a few months after the final episode of “Seinfeld” (in which Frank had one last moment in the spotlight, spending most of it yelling), broadcast on May 14, 1998, Mr. Stiller was back on television playing another off-kilter father — a marginally more restrained version of Frank Costanza — on another sitcom, “The King of Queens,” which made its debut that fall on CBS.

A regular this time, he played Arthur Spooner, the excitable father of the wife (Leah Remini) of the working-slob central character (Kevin James), for the show’s entire nine-season run.

Ms. Meara was a guest star on several episodes of “The King of Queens,” and her character married his in the series finale. Younger viewers might not have known it, but their scenes together represented the reunion of one of the most successful male-female comedy teams of all time.

The comedy partnership of Mr. Stiller and Ms. Meara flourished for more than a decade and found a new outlet when they began doing commercials. But they eventually went their separate ways professionally — although they remained happily married and continued to perform together from time to time. Ms. Meara died in 2015 at 85.

Stiller is survived by his children, Ben and Amy, both of whom followed in the family business — show business