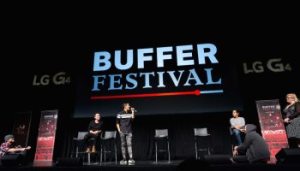 Bringing together a jury of fans, creators and industry leaders, Buffer Festival will reward excellence in elevated YouTube content on October 1st, 2017.

Toronto, ON (September 19th, 2017) — Buffer Festival is honoured to announce the first-ever Buffer Festival Awards. Keeping with the original intention of the Festival as a showcase of elevated YouTube content, the awards will bring recognition to those creators who push the artistic, intellectual, and technological boundaries of what is achievable on YouTube. All films screened at the festival will be eligible and voting will take place throughout the four days.

With over $25,000 in prizes for winners, the Buffer Festival Awards Gala will reward YouTubers and encourage them to continue producing exciting and relevant content while exploring the limitless opportunities in the ever-changing digital world. Key partners have come forward to join Buffer Festival in recognizing these creators. With prizes such as a $10,000 equipment grant from William F. White for excellence in cinematography, and two round trip tickets anywhere in the world, courtesy of Air Canada, and for writers, a development deal from Wattpad, the global multi-platform entertainment company for original stories, creators will be celebrated for their creativity and hard work on October 1st.

“It was important for us to be different from other awards programs,” commented Scott Benzie, CEO of Buffer Festival. “The Buffer Festival Awards will reward excellence and our partners are stepping up to provide the winners with something tangible they can use to keep creating great content.“

•   Excellence in Diversity – presented by CBC

•   Excellence in Writing – presented by Wattpad

•   Excellence in Storytelling – presented by The Rec Room

•   Excellence in Production – presented by Adobe

As previously announced, the winners will be screened at The Vancouver International Film Festival in early October.

Buffer Festival is an annual showcase of YouTube world premieres, bringing the most acclaimed digital creators and their audiences together. Held from Thursday, September 28th to Sunday, October 1st, the festival includes a variety of programming, including a red carpet gala and premiere screenings, showcasing an array of YouTube’s highest quality content. Now in its fifth edition, the festival will host an Industry Day, that features behind the scenes conversations, workshops, panel discussions, and case studies with some of the top creators in the digital marketplace. Creator Day will bring together and engage aspiring creators with some of the most seasoned professionals. The Festival also includes additional themed screenings throughout the weekend, hands-on workshops, and behind-the-screen conversations with creators and panels led by industry professionals.