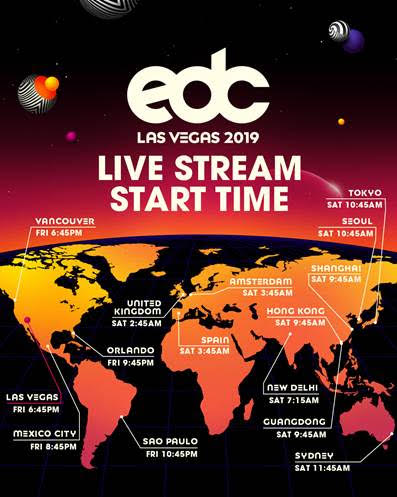 LAS VEGAS – Insomniac, the production company behind Electric Daisy Carnival, and LiveXLive will bring the world’s largest dance music festival into the homes of Headliners around the world with the official 2019 EDC Las Vegas live stream. The festival’s official live stream will be broadcasted daily, May 17 – 19, on four different channels beginning at 6:45 p.m. PT at tv.insomniac.com as well as the LiveXLive mobile app for iOS, Android, Roku, Amazon Fire TV and Apple TV.

Headliners unable to make it to EDC Las Vegas can experience unforgettable moments like the Bill Nye-hosted Opening Ceremony, as well as performances from Above & Beyond, Armin van Buuren, Illenium, Tchami x Malaa [No Redemption], Tiësto, Zhu and more. Each channel will have dedicated, custom content that will transport viewers directly into the heart of EDC Las Vegas where they can experience heart pounding DJ sets, dance with theatrical performers, explore Downtown EDC and other new elements for 2019, and watch the most anticipated firework display of the year Under the Electric Sky.

Since the partnership began, Insomniac and LiveXLive have curated custom streams for events such as EDC Las Vegas 2018, HARD Summer 2018, EDC Orlando 2018 and EDC Mexico 2019.

A limited number of GA+ and VIP tickets for EDC Las Vegas are available for purchase here. For more information and to stay up to date with current announcements surrounding EDC Las Vegas, visit edclasvegas.com.

Insomniac produces some of the most innovative, immersive music festivals and events in the world. Enhanced by state-of-the-art lighting, pyrotechnics and sound design, large-scale art installations, theatrical performers and next-generation special effects, these events captivate the senses and inspire a unique level of fan interaction. The quality of the experience is the company’s top priority.

Throughout its 25-year history, Insomniac has produced more than 2,000 festivals, concerts and club nights for nearly 5 million attendees across the globe. The company’s premier annual event, Electric Daisy Carnival Las Vegas, is the largest multi-day music festival in North America and attracts more than 400,000 fans over three days.

The company was founded by Pasquale Rotella and has been based in Los Angeles since it was formed in 1993. In 2013, Insomniac entered into a partnership with global entertainment company Live Nation.