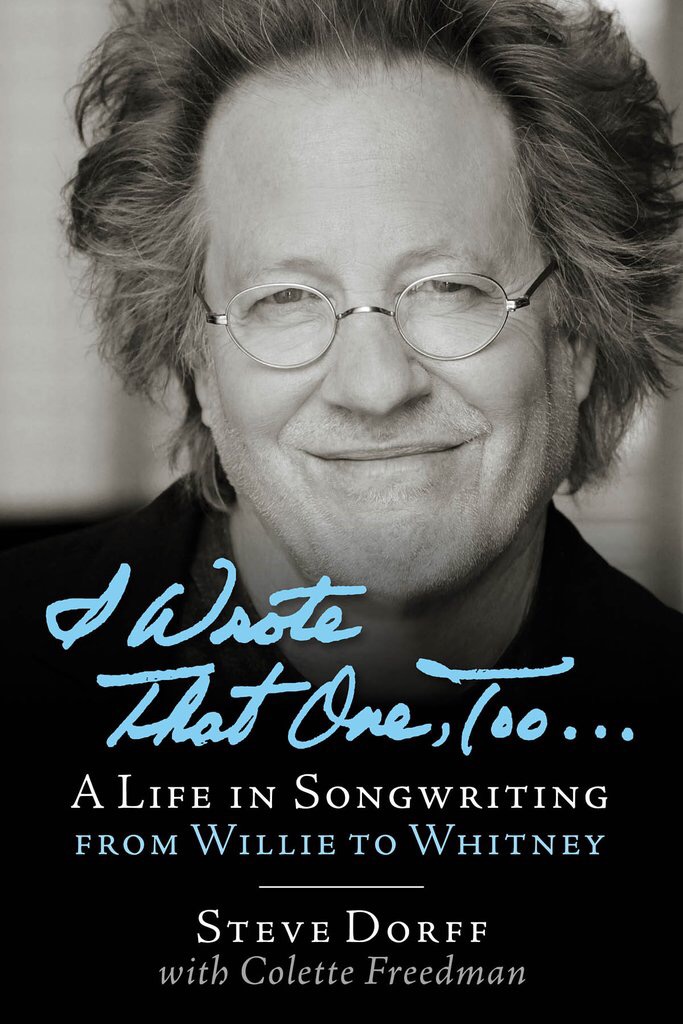 I Wrote That One, Too…

A Life in Songwriting from Willie to Whitney

by Steve Dorff with Colette Freedman

Montclair, NJ  (November 2, 2017)  – One of the most successful songwriters and composers of the last 25 years, Steve Dorff has penned over 20 Top 10 hits for pop and country artists around the world, including Barbra Streisand, Celine Dion, Blake Shelton, Smokey Robinson, Kenny Rogers, Ray Charles, Anne Murray, Whitney Houston, George Strait, Dolly Parton, Judy Collins, Cher, Dusty Springfield, Ringo Starr, and Garth Brooks. He has scored for television shows, including Growing Pains, Murphy Brown, Murder She Wrote, and Reba, and several films, such as Any Which Way but Loose, for which he penned the titular song.

Steve has now written his next hit, I Wrote That One, Too… A Life in Songwriting from Willie to Whitney (Backbeat Books Hardcover; November 1, 2017; $29.99), a memoir recounting his remarkable journey filled with amazing successes, happy accidents in the studio, incredible friendships, tremendous creative satisfaction, and sometimes just plain being at the right place at the right time with the right song in hand. He writes:

“I truly have loved being that ‘behind-the-scenes’ guy, maintaining my anonymity, and being able to walk past the obnoxious Paparazzi at great restaurants without them giving me a second glance. In my opinion, being a songwriter who has had a successful career and doing what he is passionate about, is an award in itself.”

The book follows Steve from his childhood in Queens to Manhattan to Nashville to his eventual arrival in Los Angeles. Steve shares anecdotes, advice, and insights into his phenomenal career and recounts his experiences and sometimes-hilarious behind-the-scenes stories with the many famous singers, musicians, producers, and lyric writers with whom he has collaborated. He also gets personal and shares what he has learned about strength, courage, perseverance, and unconditional love from three important women in his life: his first wife and his mother-who passed away within a few months of each other-and his big sister, who died in May 2016.

Full of heartfelt stories, hard-earned wisdom, and delightful wit, I Wrote That One, Too… is a great read for musicians, music fans, and whoever has chased a dream and survived the surprising but often serendipitous turns in the road.

Steve Dorff is a Grammy-nominee songwriter with a long line of hits to his credit, including Kenny Rogers’ “Through the Years” and most recently Garth Brooks’ “Baby, Let’s Lay Down and Dance.” An industry stalwart with a career spanning four decades, Dorff is the recipient of the NSAI Songwriter of the Year award and has been honored with more than 40 BMI awards, 14 Billboard No. 1s, and 15 Top 10 Hits. More recently, he has returned to his first love, musical theater, with his forthcoming musical “Josephine“. His songs reflect all musical genres, from contemporary sounds to haunting orchestral melodies, and he continues to be an integral part of today’s music scene.

Colette Freedman is an internationally produced playwright with over 25 produced plays. She was voted “One of 50 to Watch” by the Dramatist’s Guild. Her play Sister Cities was the hit of the 2008 Edinburgh Fringe, earned five-star reviews, and has been produced internationally. She has co-written a number of books with such best-selling writers as Jackie Collins and Michael Scott, and has written two novels, The Affair and The Consequences.

I Wrote That One, Too… A

Life in Songwriting from Willie to Whitney

By Steve Dorff with Colette Freedman