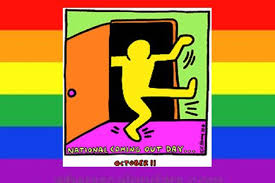 WASHINGTON — Today, the Human Rights Campaign (HRC) Foundation, the educational arm of the nation’s largest lesbian, gay, bisexual, transgender, and queer (LGBTQ) civil rights organization, celebrated National Coming Out Day by releasing a new video highlighting actors, athletes, musicians, and others who are helping to advance equality by coming out and sharing their stories. HRC is also featuring guides and resources that are part of its National Coming Out Project.

“Coming out — whether as lesbian, gay, bisexual, transgender, queer, or as an ally — is incredibly important in our fight to advance LGBTQ equality,” said Mary Beth Maxwell, HRC Senior Vice President for Programs, Research, and Training. “Research proves that when people know someone who is LGBTQ, they are far more likely to support equality. It takes bravery and courage to come out, and by speaking up and sharing our stories, we are helping to make the world a better place by changing hearts and minds.”

Coming out and living openly is a journey that individuals choose to make every single day of their lives. Whether it’s for the first time ever or the first time today, coming out can be an arduous journey. Every coming out experience is unique and must be navigated in the way most comfortable for the individual. To help in that journey, HRC through its National Coming Out Project has released invaluable guides and resources, including:

In addition to the power of coming out, this year it’s more important than ever that LGBTQ and pro-equality voters use their power to elect candidates who will support the progress we’ve made, and work to advance it in the future. With so much at stake in this year’s elections, HRC has been working throughout the year to mobilize pro-equality voters as part of an unprecedented #turnOUT campaign. In addition, HRC recently launched a multi-state voter contact effort that, for the first time, reaches well beyond the nation’s nearly 10 million LGBTQ voters to mobilize the growing ranks of allies with a history of supporting equality.

The Human Rights Campaign Foundation is the educational arm of America’s largest civil rights organization working to achieve lesbian, gay, bisexual and transgender equality. HRC envisions a world where LGBT people are embraced as full members of society at home, at work and in every community.