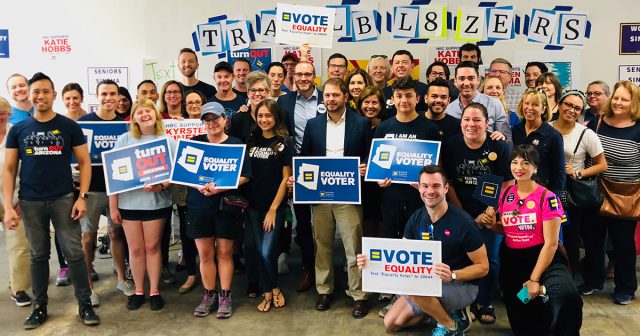 In advance of 2018 midterms, HRC made $26 million investment in largest grassroots expansion in its 38-year history and deployed 150 HRC staff to more than 70 congressional, targeted senate and key statewide races across 23 states

In the summer of 2017, the Human Rights Campaign launched HRC Rising, the largest grassroots expansion in the organization’s 38-year history. Since then, HRC has endorsed more than 480 pro-equality candidates nationwide, and deployed 150 staff to organize and mobilize voters in  more than 70 congressional, targeted senate and key statewide races across 23 states. HRC also backed more women and people of color than in any election cycle in its history: 45 percent of HRC’s endorsees were women — including 55 percent of non-incumbent candidates — and nearly one-third were people of color.

Tonight, a record number of LGBTQ lawmakers were elected at all levels. Notably, Senator Tammy Baldwin was re-elected to the U.S. Senate. Jared Polis became the first openly gay man to be elected governor in the United States. Oregon Governor Kate Brown, the first LGBTQ governor in history, was re-elected. Sharice Davids became the first gay Native American lawmaker in Congress. And a record number of out LGBTQ candidates were elected and re-elected to the U.S. Congress.

HRC helped register more than 32,000 voters and recruited more than 4,200 volunteers, who worked over 8,500 shifts and clocked more than 30,000 volunteer hours. In the critical final four days of the campaign, HRC staff and volunteers in get-out-the-vote efforts alone knocked on more than 80,000 doors, and held 36,400 conversations with voters at their doors and by phone on behalf of our endorsed candidates.

Since June, HRC President Chad Griffin has barnstormed the country campaigning for 50 pro-equality candidates at more than 70 events in 47 cities across 23 states.

“Tonight, millions of LGBTQ voters and allies across the nation rejected the politics of hate and fear and put Donald Trump and Mike Pence on notice,” said HRC President Chad Griffin. “The days of attacking LGBTQ people for political gain are over, and the American people will not stand for lawmakers who try to drum up votes by trafficking in hate. Thanks to millions of Americans who stood up and fought back, we have succeeded in restoring a sane, pro-equality majority to the House and placing a check on this administration’s hateful agenda. To the 3 million members of the Human Rights Campaign who have worked tirelessly for the last 18 months to out-organize and out-mobilize anti-LGBTQ extremists nationwide, thank you for making history tonight. Together we have sent a loud and clear message that if you come for us, then we will come for you on Election Day.”

HRC’s unprecedented grassroots mobilization represented an investment of approximately $26 million to  recruit volunteers, mobilize constituents, register voters and grow the organization’s grassroots army in an all-out effort to pull the emergency brake on the hateful anti-LGBTQ agenda of the Trump-Pence administration and elect a Congress that would hold them accountable.

We also celebrate a historic victory in Massachusetts where voters upheld non-discrimination protections for transgender people in public spaces. Question 3 – which asked voters whether to maintain a 2016 law protecting transgender people from discrimination in critical public accommodations including restaurants, hotels, hospitals, stores and public transportation – was the first time gender identity non-discrimination protections were on a statewide ballot independent of protections based on sexual orientation. HRC serves as a founding executive committee member of Freedom for All Massachusetts, a coalition of national and state equal rights organizations, which led the successful Yes on 3 Campaign.

Tonight, HRC has released a number of statements on major victories for top HRC-backed candidates. See below for comment on specific races so far — for up-to-the-minute reaction and information on HRC’s engagement in additional races please email press@hrc.org:

The Human Rights Campaign is America’s largest civil rights organization working to achieve equality for lesbian, gay, bisexual, transgender and queer people. HRC envisions a world where LGBTQ people are embraced as full members of society at home, at work, and in every community.