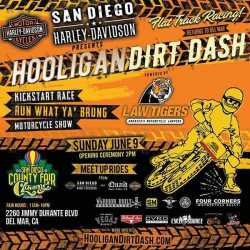 The racing kicks off at 2pm with opening ceremonies immediately followed by the first round of racing, then bar banging action again at 3:30pm and 5pm all on a dirt track, pitting motorcycle racers aboard street-legal and purpose-built machines of practically any make, model year and engine size. ​Hooligan Dirt Dash races have a grassroots vibe that makes them super popular with fans.

“Back in 2015 at the Hot Bike Born Free kick off party I was cornered by a few Hooligan Racers and talked into producing a Hooligan race in Sturgis. Annually over the past few years we have kept the series running producing races in a few times in Texas, expanding last year to Durango, Colorado during the Four Corners Motorcycle Rally. We’re excited to give Hooligan racers an outlet to race having fun and entertain everyone in San Diego this Sunday!” exclaimed John Oakes, Freeze Management CEO and Hooligan Dirt Dash founder.

In addition to the racing, motorcyclists can join three meet up rides to the San Diego County Fair from across the south land with 100% of the proceeds being donated to the The Warrior Built Foundation supporting their efforts and programs benefiting combat veterans. Motorcycle riders who choose to join rides can start from Quaid Harley-Davidson in the Inland Empire from Loma Linda, The Warrior Built Foundation Headquarters in Lake Elsinore and San Diego Harley-Davidson. To join the ride it’s only a $20 donation per person including free admission to the races and Fair. For address, meet up times, ride times, to register online in advance and more, visit www.HooliganDirtDash.com.

“The Warrior Built Foundation is honored to work with Quaid Harley-Davidson, San Diego Harley-Davidson and John Oakes and the team at Freeze Management on this Ride to the Fair,” said Nick Hamm (1stSgt USMC Ret.) and Warrior Built Founder/President. “Bringing awareness to our cause with rad events like this one enables us to support combat vets in a wide variety of recreational outlets.”

After the Hooligan Dirt Dash powered by Law Tigers race series makes an appearance in San Diego, the series makes a stop in Durango, Colo. during the Four Corners Motorcycle Rally on Saturday, August 31 and then closes out the series with a double header during the Vegas BikeFest on Thursday, October 3rd & Friday, October 4th at the Plaza Hotel & Casino Core Arena in the heart of downtown Las Vegas.