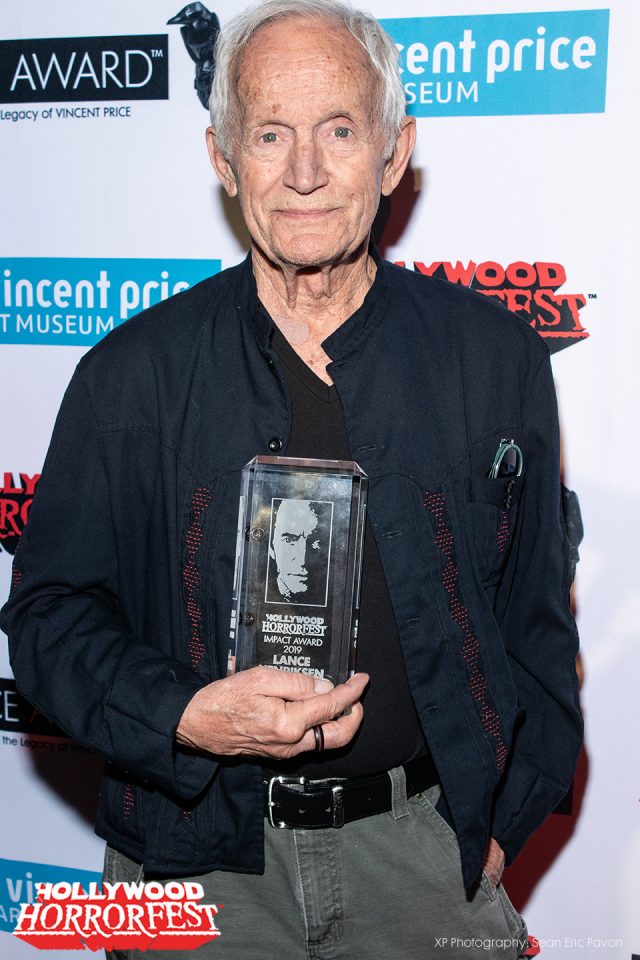 Hollywood legend LANCE HENRIKSEN received the coveted IMPACT AWARD last Friday August 9th at HOLLYWOOD HORRORFEST 2019. The star of film classics ALIENS, THE TERMINATOR and NEAR DARK was happily surprised on-stage with the award presentation from journalist & author PAT JANKIEWICZ. Mr. HENRIKSEN was at the festival as part of Friday’s EXORCISM AT 60,00 FEET Q&A panel and had no idea he was about to be given the award. The IMPACT AWARD is presented to an artist whose work has positively impacted genre filmmaking. And with a body of work that not only features the aforementioned classics but also includes THE RIGHT STUFF, JAGGED EDGE, THE PIT & THE PENDULUM, TALES FROM THE CRYPT, ALIEN 3, HARD TARGET, THE QUICK & THE DEAD, THE X FILES and MILLENNIUM to name but a few, Mr. HENRIKSEN truly deserves this accolade. As several cast members of EXORCISM AT 60,000 FEET received festival awards on-stage Mr. HENRIKSEN joked, “Well I hope I don’t receive an award” only to be happily stunned when the IMPACT AWARD was presented to him, “This Is Your Life” style. Previous recipients include HALLOWEEN co-composer ALAN HOWARTH and the late, great character actor DICK MILLER.