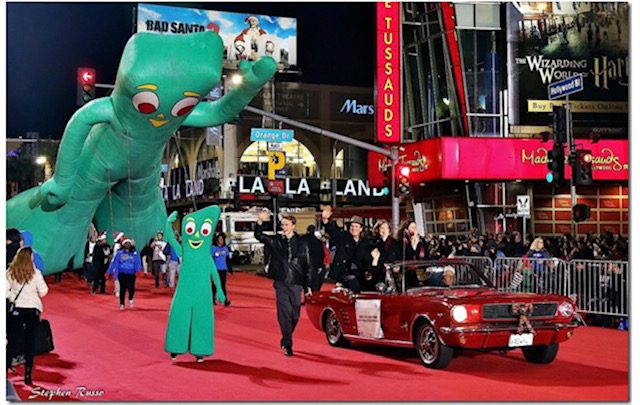 Hollywood, CA (The Hollywood Times) 12/1/18 -On 5:00 pm on the 26th of November, everything from Hollywood Blvd & Sunset to Vine st. was blocked off. Artists, singers, actors, schools, businesses, children, and locals all made their way into the crowds to participate. Confusion showed itself on the road due to the closures, and instead of cars and traffic, the streets were packed with families and friends enjoying the start of a very unique night. The longest/biggest red carpet I’d ever seen had been rolled out, & covered the black asphalt entirely along the parade route. Thousands gathered around waiting in anticipation to see what the display would have and the different surprises this year would bring. Movie characters, famous props, larger than life balloon floats, unique cars, and all of the performers of the parade made their way up and down getting every float and feature ready to see. People waited in the streets from afar or watched from above through windows and from building balconies. Everything was well lit and glistening for photography, I looked around and saw video being taken for the annual telecast. Those who were unable to see it all it in person will have an opportunity to see the fun on nationwide television before Dec 25. In Los Angeles, this is a celebration for the Christmas spirit. The holidays are a time for practicing traditions, the tradition of the Hollywood Christmas parade has carried on for an incredible 87 years!

Before the parade started, a red carpet and backdrop were set up for stars. Celebrities were invited and had photographs taken and given individual interviews. Cheery Christmas themed outfits and glittering ensembles reflecting the high energy of the upcoming holidays. Charlie Brown was there in a scarf and coat with Lucy and I had to ask what people at Knotts Merry Farm had done with the holiday-themed gear and merchandise. Retro buffalo plaid print is on everything, and water bottles and mugs will be available for purchase with wiggles the cat dressed up as Santa Clause. When I asked about the Christmas time snacks and treats, Tim, representing the park, told me that peppermint flavoring will be on everything, and that famous funnel cakes will be sold as well. We discussed the humble beginnings of the farm, how the berries originally sold well from the farm because they were big and easily preserved. I was amazed how he mentioned that it had all started with Ms. Knotts selling a plate of chicken to someone that asked for some because of the delicious smell, instead of refusing the offer she served the customer the chicken on her wedding china!

Leave it to Beaver has been a popular family tv show for decades, and there was an appeal of acting to me that I’ve had from the time that I remember seeing the show. I’d imagined it would be intimidating for a kid in the business, considering how weird I would feel to be working with so many strangers and adults daily. I was curious what growing up in the early days of Hollywood would be like. I noticed many actors, but beaver stood out instantly to me. Taking the opportunity I asked him; “How do you think Hollywood has changed throughout the years working in the movie and TV industry?” Eager for his response I’d contemplated rephrasing what felt like too simple of a question to ask, but before I had a chance he was ready to share his input and explained; “It’s always been a very good industry. I’ve been on leave it to beaver since 1957 and I became an actor in 1950 so I’ve never really had problems.” “it comes and goes, there’s always a few bad people that get caught and there are consequences for them, but on the whole the acting industry in Los Angeles, New York, they’re very nice people. They have laws those help actors know they can only work for so long” Being a young adult in Los Angeles, I realized how much of a different environment the entertainment industry can be for a growing mind. School and interests can come secondary to keep shooting/filming schedules on track. It’s hard to imagine, but not long ago parents had no strict child labor laws to follow. I thanked him dearly and wished him a Merry Christmas, and he smiled and said happy new years.

Big smiles were everywhere I went, and the laughter was unending. When the night was over I had recognized how lucky it felt to not be missing out on something so enjoyable. For t

his being my first time going, they’ve assuredly succeeded in getting me prepped and excited for winter. Over the years surrounding areas and communities of parents and children have been in support of this event, and have all become an integral part of the organization of the parade. It all came together in full effect because I’m left still in awe. This truly wowed and impressed until long after being gone, clearly everyone involved in creating the parade this year gave their all & created a spectacular and magical show.