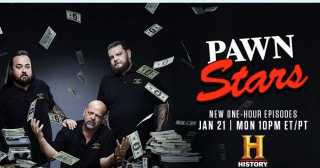 Long before banks, ATMS and check-cashing services, there were pawn shops. Pawning was the leading form of consumer credit in the United States until the 1950s, and pawn shops are still helping everyday people make ends meet. Pawn Stars takes you inside the colorful world of the pawn business. At the Gold & Silver Pawn Shop on the outskirts of Las Vegas, three generations of the Harrison family–grandfather Richard, son Rick and grandson Corey–jointly run the family business, and there’s clashing and camaraderie every step of the way. The three men use their sharp eyes and skills to assess the value of items from the commonplace to the truly historic, including a 16th-century samurai sword, a Super Bowl ring, a Picasso painting and a 17th-century stay of execution. It’s up to them to determine what’s real and what’s fake, as they reveal the often surprising answer to the questions on everyone’s mind, “What’s the story behind it?” and “What’s it worth?”

After serving in the U.S. Navy and losing a million dollars in the real estate market, Richard “Old Man” Harrison uprooted his family and moved to Las Vegas in pursuit of a fresh start. Opening the Gold & Silver Pawn Shop in 1988, he had to learn a little about a lot really fast. From Rolexes to antique cars, Richard is now armed with the rare skill of assessing the value of anything accurately. With uncanny precision, Richard is the king of purchasing underpriced merchandise, even from archival pawn shops, which has helped turn his initial $10,000 investment into a multi-million dollar business. Disciplined, wise and cunning, Richard drives a hard bargain and is anything but easy to please.

After 28 years in the business, Rick “The Spotter” Harrison is an expert when it comes to spotting anything fake or stolen. As far as big-ticket items, Rick is the man for the job. Spotting a fake Cartier watch that most people would mistakenly purchase for $30,000 is just one of his many skills. Often acting as the middleman between his father and his son, Rick is the glue that holds this family and business together. Trained in the pawn business from the age of 13, Rick was born a hustler. He even dropped out of high school to pursue his $2,000-a-week business of selling fake Gucci bags. With enough money to partner with his father at the age of 23, he never looked back.

Corey “Big Hoss” Harrison began working at the pawn shop at the age of 9. Expertly trained in the art of appraisal, Corey has the brains to spot a cheat, and handles everything when it comes to hiring and firing employees and managing eBay clients. Though Corey thinks Rick treats him like a slave, Rick believes that Corey still needs to prove himself and earn his keep. Without a real stake in the business, Corey is hoping that all of his hard work will one day pay off.

As Corey’s devoted childhood friend, Austin “Chumlee” Russell is just like a son to Rick and he’s been around the shop since he was a kid. Everybody loves Chum, but he is often the butt of the boys’ jokes. Part of the reason he isn’t taken seriously is that he constantly begs Corey to buy items that entertain him—like video games and circus paraphernalia—that usually don’t make good business sense. And, although his heart of gold makes him a pro at customer service, it’s continually proven to be bad business for the shop. Chumlee always wants to give his patrons the best deal and often takes their side—a trait that never fails to push Rick’s buttons. Where did Chumlee get his nickname? Friends in elementary school took the name from cartoon character Tennessee Tuxedo’s sidekick, a walrus named Chumley.