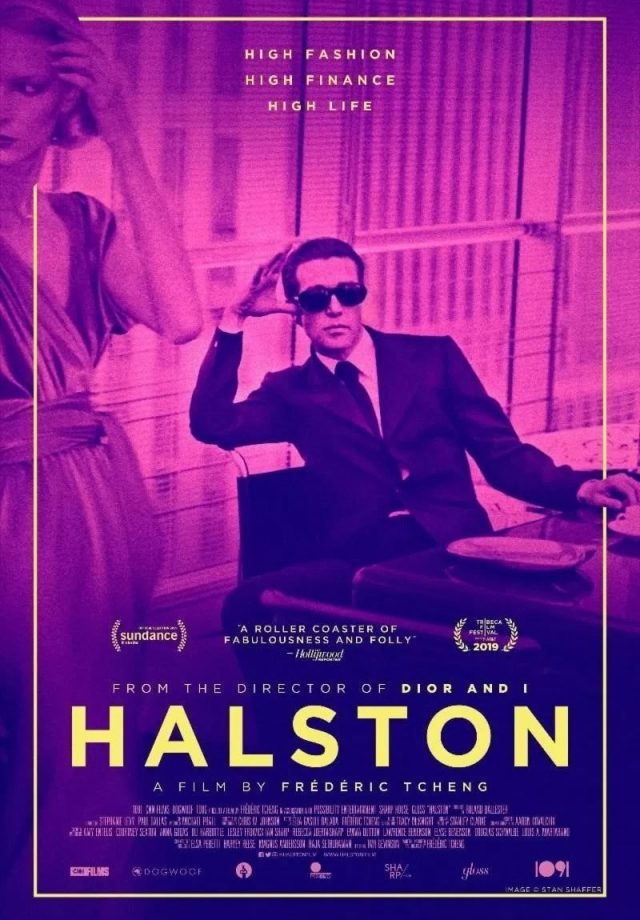 “They were all impressed with your Halston dress/And the people that you knew at Elaine’s/And the story of your latest success/Kept ’em so entertained.”–Billy Joel, “Big Shot”

Whatever happened to Halston?  The last this reporter had heard, Sarah Jessica Parker was hired as president and chief creative officer for the famed fashion company’s main line and wore two Halston Heritage dresses in the 2010 film SEX AND THE CITY 2.  Parker swiftly stepped down in 2011 and the hallowed designer once again slipped into obscurity.

Frédéric Tcheng’s new feature-length documentary film HALSTON may finally prevent this prodigy’s name ever from being forgotten again.  HALSTON premiered at the 2019 Sundance Film Festival.  1091 Media will be releasing the film on May 31st in Los Angeles at the Landmark’s Nuart Theatre and select theaters nationally this summer.

Influenced by film noir and Orson Welles’ mighty 1941 classic CITIZEN KANE, Tcheng frames HALSTON as an investigation with Tavi Gevinson as an archivist examining the Halston company records in scripted scenes.  However, the truly engrossing parts of this two-hour film most often come from its totally unscripted archival footage filled with the myriad of stars who swirled around the Emperor and His Clothes. 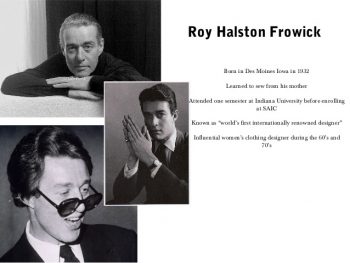 Roy Halston Frowick was born undramatically in Des Moines, Iowa on April 23rd, 1932.  He studied design in Chicago before going to work in New York and rose to international fame in the 1970s before succumbing to lung cancer and AIDS-related complications in 1990.

Halston’s genius was to create women’s fashions that were at once simple, sophisticated, and sensuous.  High-quality materials such as silk and cashmere contributed a touch of luxury to his stark silhouettes and monochromatic color schemes.  The designer rebelled against buttons, bows, and other elaborate details that “didn’t work” and combined elements of menswear in his women’s garments.

The characteristic bias cut of Halston’s clothes made them spiral out on the runway in a way that was instantly recognizable.  More to the point, the natural flow of the fabric accentuated a woman’s shape without fussy couture styling.

Elegance AND ease proved to be an irresistible formula.  Halston’s ageless and timeless designs could be worn just as well by plus-size divas like Pat Ast as by more conventional-looking all-American models like Cybill Shepherd.  “You were free under his clothes,” claims model Karen Bjornson in the film.

Halston did his utmost to imbue his fashion house with this same sense of freedom.  He personally designed and equipped what his employees called “the best workroom in the world” with windows everywhere at the Olympic Tower in New York. 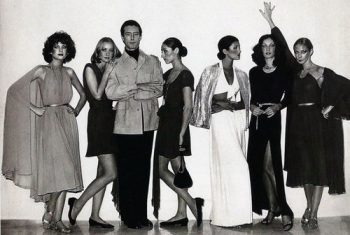 “H” was often seen around town with his hand-selected troupe of stunning “Halstonettes,” whom he took on meticulously-planned tours of France and China that helped to make the Halston name a global legend.  “Will Halston Take Over the World?” wondered one of countless reporters who covered the design ambassador’s travels.

The one and only Liza Minnelli helped to make the “Battle at Versailles” fundraiser held on November 28th, 1973 between five American and five French designers a smashing success.  Along with 700 other guests, Princess Grace and Marie-Hélène de Rothschild personally watched fabled French couturiers like Pierre Cardin, Christian Dior, Hubert de Givenchy, Yves Saint Laurent, and Emanuel Ungaro fight it out on the runway with Halston, Bill Blass, Stephen Burrows, Oscar de la Renta, and Anne Klein.  The American designers and their eleven African-American models stole the show and put American design on the international map!

Halston was to become the only designer Liza Minnelli would ever wear.  He dressed her head to toe in sunshine yellow for the 1973 Academy Awards ceremony at which she won a Best Actress Oscar for CABARET.

Other major celebrity fans such as Cher, Robert De Niro, Anjelica Huston, Lauren Hutton, Mick and Bianca Jagger, Elizabeth Taylor, and Andy Warhol are spotted throughout HALSTON, many at the notorious discotheque Studio 54 in New York City.  Somali-born supermodel Iman is shown having the jitters at her very first runway show that was created by Halston.

He further entered the popular imagination with huge successes such as Jacqueline Kennedy’s 1961 inaugural pillbox hat; the best-selling Halston signature fragrance in its slightly naughty bottle created by Elsa Peretti; and uniforms for Avis, Braniff International Airways, the Girls Scouts of America, the 1976 Olympics, and the NYPD.  The designer sold his brand to Norton Simon Industries in 1973 in an attempt to take it to the next level and made a final attempt to democratize the Halston label by signing a billion-dollar licensing deal with mass market retailer J.C. Penney in 1983.

Said deal proved to be the undoing of the man once thought to be the premier fashion designer of all America.  Far from expanding Halston’s appeal across price points as hoped, his association with J.C. Penney alienated many strong supporters such as Bergdorf Goodman (where he got his start as a milliner to stars like Lauren Bacall and Gloria Swanson).

By far the most emotionally wrenching aspect of HALSTON is watching the empire built by the colossal will and talents of one man crash and burn in a series of ill-fated business decisions.  Halston’s most loyal models and staff members candidly recount the abuses they were expected to endure after the idylls of the early days, with the designer’s drug use clearly being one of the main culprits.

Halston was fired from his own company in 1984 and tried to buy it back before it was acquired by Revlon in 1986.  His archival designs were sold off at cut-rate prices and his recordings of Halston fashion shows, parties, and events were erased and re-sold as blank VHS tapes.

However, Halston’s legacy could not be wiped off the map quite so easily.  He continued to design for family members and high-style friends like Liza Minnelli and choreographer Martha Graham.

His loving niece Lesley Frowick, who is interviewed in the film, went to work for him in New York during the final years of his life.  Frowick went on to write the 2014 book HALSTON: INVENTING AMERICAN FASHION complete with a foreword by Liza Minnelli.

Halston tested positive for HIV in 1988 and died in 1990 on March 26th, the same day as the Academy Awards broadcast.  His name was highlighted on the screen for viewing audiences around the world to see.  Liza Minnelli and Elsa Peretti co-hosted a tribute to Halston at Lincoln Center in June of the same year.

Halston’s main same-sex lover was Venezuelan-born artist Victor Hugo, who served as his window dresser during their ten-year relationship.  For so many, Halston personified the social and sexual revolution that was sweeping America during the relatively short course of his life.

This kaleidoscopic film probably raises more questions about Halston than it answers.  Thus is the nature of human personality, especially such legendary ones with so many layers!

But the proof truly is in the pudding.  Halston’s classy yet comfortable designs continue to attract a diverse range of customers.  Queen Latifah and Oprah Winfrey are two of Halston Heritage’s better-known recent buyers.  “You’re only as good as the people you dress,” Halston always claimed.

THT readers who are Halston fans should be glad to hear that the company relocated from New York to Los Angeles in 2012!  The Halston collection includes ready-to-wear, dresses, handbags, footwear and small leather goods, and is known for silhouettes including jumpsuits, shirtdresses, kaftans, and one-shoulder styles.

The brand is distributed throughout the U.S., Canada, the Middle East, and Mexico City.  So Halston’s dream to dress the world keeps coming true long after his demise!

About the HALSTON Filmmaker:
French-born filmmaker Frédéric Tcheng has made a career from creating fashion-themed documentaries.  He co-produced and co-edited VALENTINO: THE LAST EMPEROR, the 2009 hit shortlisted for the Best Documentary Oscar.  He is the co-director of DIANA VREELAND: THE EYE HAS TO TRAVEL (2011).  His directorial debut DIOR AND I premiered at the 2014 Tribeca Film Festival and was released by The Orchard in 2015.