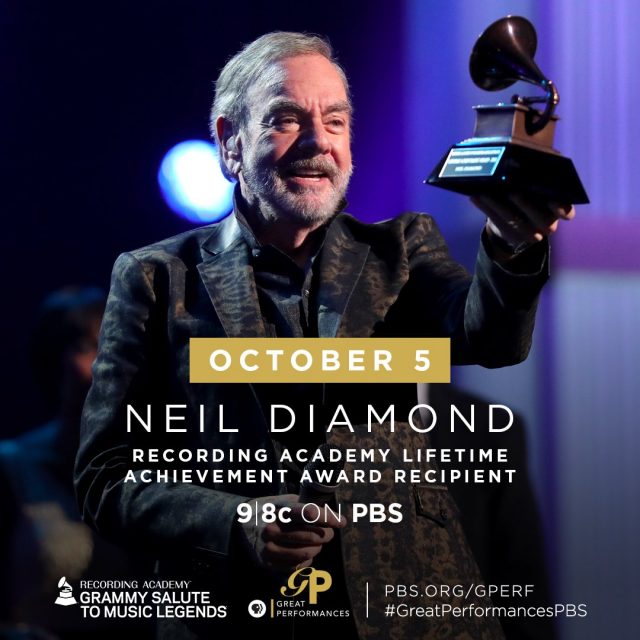 Don’t forgot to set your DVR for PBS Great Performances, if you will not be home tomorrow night, to watch this amazing presentation of music history. Get the whole family together to watch the great performances.

In collaboration with the Recording Academy™, Great Performances presents GRAMMY Salute To Music Legends 2018®, the third annual all-star concert offering a primetime spotlight for the Recording Academy’s 2018 Special Merit Awards recipients. The celebration and tribute concert feature rare performances by honorees and never-before-seen renditions of their classic songs by those they’ve inspired. Recorded in July at Los Angeles’ Dolby Theatre, the event premieres nationwide Friday, October 5 at 9 p.m. on PBS (check local listings) and will be available to stream the following day via pbs.org/gperf and PBS apps.

“I’m a Believer” (performed by Micky Dolenz and Neil Diamond)

“Love and Happiness” (performed by Emmylou Harris and Trisha Yearwood)

After Emmylou’s performance, she took the time to thank PBS by saying “They are a shining light of sanity and light in a world that can be very caotic. Let’s make sure we support them and don’t go away because we need you.” Wow, that is so true. Please continue to support PBS and their terrific programming. Get you kids involved in watching PBS.

“A Taste of Honey” (performed by Herb Alpert)

Medley: “What’s Love Got to Do with It / Proud Mary / The Best” (performed by Sheléa)

“Cissy Strut/Fire on the Bayou” (performed by The Meters)

The Recording Academy Lifetime Achievement Award honors performers who have made contributions of outstanding artistic significance to the field of recording, while the Trustees Award recognizes such contributions in areas other than performance. Both awards are determined by a vote of the Recording Academy’s National Board of Trustees. Technical GRAMMY Award recipients are determined by vote of the Academy’s Producers & Engineers Wing® Advisory Council and Chapter Committees and ratified by the National Board of Trustees, and presented to individuals and companies who have made contributions of outstanding technical significance to the recording field.

Throughout its more than 40-year history on public television, Great Performances has provided viewers across the country with an unparalleled showcase of the best in all genres of the performing arts, serving as America’s most prestigious and enduring broadcaster of cultural programming.

A production of THIRTEEN Productions LLC for WNET, Great Performances: GRAMMY Salute To Music Legends 2018® is written by David Wild and directed for television by David Horn, with Mitch Owgang as producer, and Horn and Neil Portnow as executive producers. For Great Performances, Bill O’Donnell is series producer; David Horn is executive producer.

About the Recording Academy

The Recording Academy represents the voices of performers, songwriters, producers, engineers, and all music professionals. Dedicated to ensuring the recording arts remain a thriving part of our shared cultural heritage, the Academy honors music’s history while investing in its future through the GRAMMY Museum®, advocates on behalf of music creators, supports music people in times of need through MusiCares, and celebrates artistic excellence through the GRAMMY Awards®—music’s only peer-recognized accolade and highest achievement. As the world’s leading society of music professionals, we work year-round to foster a more inspiring world for creators.