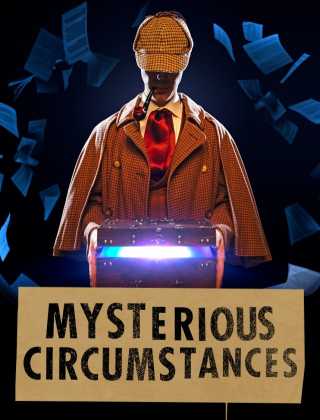 WESTWOOD, CA (The Hollywood Times) June 22, 2019 – Director/Artistic Director, Matt Shakman has directed three acclaimed productions for the The Geffen Playhouse and he can now add Mysterious Circumstances as his 4th hit – written by Michael Mitnick. Shakman’s direction is akin to watching dancers executing simple to complex movements seamlessly and the original music and sound design by Jonathan Snipes adds to the dynamic contrasts as the story moves along.

Inspired by David Grann’s article in The New Yorker – “Mysterious Circumstances: The Death of a Sherlock Holmes Fanatic” is based on a true story and events that occurred in 1894 and 2004. The world’s most foremost scholar on Sherlock Holmes and Sir Arthur Conan Doyle – Richard Lancelyn Green – is found dead in his London apartment. A death – that only his hero Holmes – can answer as we seemingly join in a dynamic game of Clue as to whodunit. To both Green and Holmes we discover in time.

The balance of comedy and drama in this piece is riveting.  I’m not a big Sherlock Holmes fan but fans – and those like me – should flock to see this show. It’s confusing at times but so entertaining that it wakes all of your senses and has you questioning who did kill Richard? What happened to Holmes? Why should we bring him back… that question is for the playwright, Michael Mitnick – an excellent purveyor of the mystery that makes good theatre even greater.

Is this play about love or obsession? All of the actors play multiple characters with such an ease of speed – so convincingly – that I thought there were two women in the cast and there’s but one wonderful actress, Helen Sadler. Emmy nominated Alan Tudyk plays both Richard Lancelyn Green and Sherlock Holmes and gives us the Holmes we know and love – but it is as Green that he shines the brightest.

Shakman has a solid, strong cast but there’s always that stand-out treat and it is Hugo Armstrong. No matter which character he inhabits you believed every moment, every breath that he takes. He’s one of those rare breed of actors that lives his roles and goes beyond performance mode – as the audience witnesses an artist without seeing him work. Instead, we’re absorbed as if standing alongside him.

Tudyk is quoted in an interview with Broadway World before the June 19th’s opening night as saying this about the play:

It flows really nicely. The elements of comedy work well with elements of drama. It’s all of one style, even though it has different elements in it. I think people will enjoy it. I hope they walk away feeling good and they had a good night at the theatre. And comment possibly on their way out of the theatre, ‘It’s good to view something that isn’t content.’”

He is dead on, pun intended, that it’s not content. It’s just great entertainment.

Set Designer, Brett J. Banakis is impressively simple in his inherently bare yet surprisingly detailed artistic design that becomes richer where scenes require it. Lighting Designer Elizabeth Harper along with Projection Designers Kaitlyn Pietras and Jason H. Thomson have created mesmerizing illusions and images that stay with you long after the play is over.

You don’t need to be a big Sherlock Holmes to want to see this play again – it’s that good. It’s a breathtaking view of theatricality and magic that’s not to be missed and with Invisible Tango as Geffen’s other current hit – it’s double the magic.